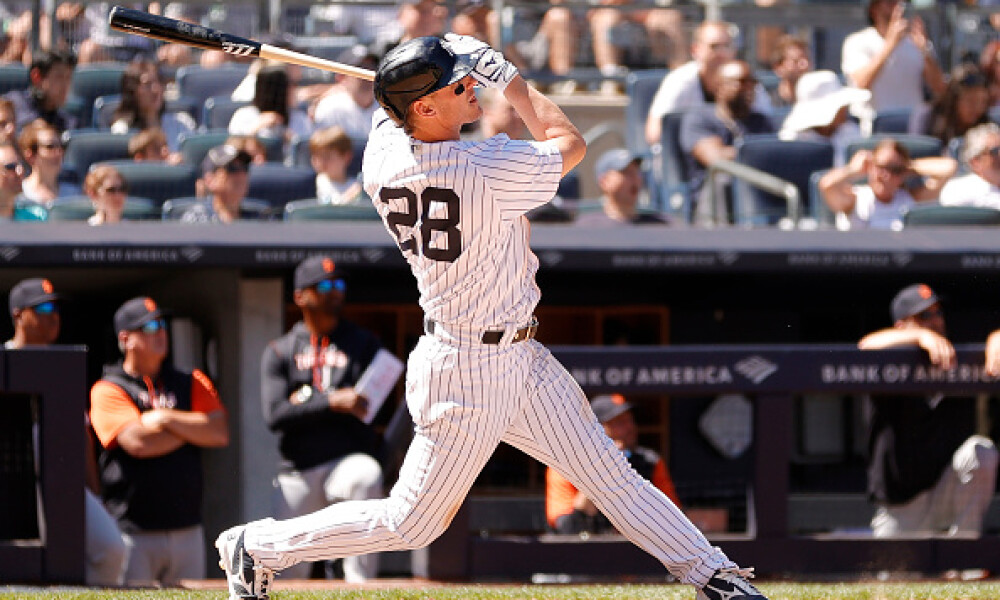 Another week of fantasy baseball begins and we have a lot to discuss in today's MLB daily round-up for June 6! Let’s take a quick look back at the top fantasy baseball news and headlines from Sunday’s MLB games. We'll go over Josh Donaldson’s walk-off for the New York Yankees, Patrick Corbin's impressive start for the Washington Nationals, and then a Philadelphia Phillies comeback capped by Bryson Stott’s walk-off homer. Plus, we have some important updates on the latest MLB injury report to discuss before you set those fantasy baseball lineups. Finally, we'll wrap things up with some MLB DFS top picks for Monday night's games. Be sure to check out the updated fantasy baseball rankings for June before setting your lineups. Don't forget to find the best fantasy baseball waiver wire targets and two-start pitchers for your rosters as well. Before we start another night of MLB fantasy baseball, let’s take a look at some of the top performances and injury news from Sunday in the latest MLB daily round up!

They own the Bronx. Besides having the best record in baseball (39-15), the Yankees have won six straight series at home and have their best record since 1998.

Patrick Corbin came into Sunday’s game against the Reds as one of the worst pitchers in the game. With eight losses on the season, he had become a running joke of fantasy baseball managers and MLB DFS lineups as a player to pick on.

That changed a bit on Sunday. After getting off to another rough start – three runs and five hits allowed on 26 pitches in the first inning – Corbin settled right in and proceeded to shut down the Reds' offense over the next four innings. Through those four frames, he only allowed four hits without giving up a run or walk. For one day, at least, Corbin was an All-Star again for the Nationals.

Yordan Alvarez is raking. Every time he steps to the plate he mashes the ball. In yesterday’s series finale in Kansas City, he barely missed a long home run to center field before crushing a 456-foot bomb along with a line-drive triple and single.

Alvarez did not disappoint in the Astros' recent three-city tour through Seattle, Oakland, and Kansas City. He's smashed four home runs with nine RBI in the last nine games. It's no wonder the 'Stros shelled out $115 million over the next six years to keep Alvarez in Houston.

Luis Arraez Is A Hit Machine

The Twins' New Era-Rod Carew will not stop hitting. Arraez reached base five more times on Sunday with four hits, a walk, and two runs scored. He now leads the league in hitting with a .358 batting average, plus he sits atop the on-base percentage leaderboard at .447. Arraez was able to pass Tim Anderson yesterday for the batting title lead and now has a career average of .320.

What a weekend for the Phillies. It started on Friday with the dismissal of manager Joe Girardi after a 22-29 to start the season. With interim manager Rob Thomson at the helm, the Phillies won 10-0 on Friday night and 7-2 on Saturday.

Sunday capped off the wild weekend. The Phils went into the eighth inning down 6-2, but it was far from over. Bryce Harper tied the game with a grand slam in that inning then called rookie Bryson Stott’s three-run walk-off home run with two outs in the ninth.

According to MLB.com, Harper told Phillies ace Zack Wheeler- “He’s about to go deep right here, I can feel it.” Deep he did and the Phillies, all of a sudden, have won four consecutive games for the first time in nearly a month.

The Dodgers' Clayton Kershaw made a rehab start for Single-A Cucamonga on Sunday and he allowed three hits while striking out seven over four innings and 59 pitches. Dodgers manager Dave Roberts has stated that Kershaw’s next start will be with the big team at some point next week (probably the weekend series against the Giants) – so expect the lefty to be on a pitch count in his first game back.

Taylor Ward, amid a breakout season, was placed on the Injured List yesterday to give his sore right hamstring some time to heal. The Angels' outfielder had left Friday’s game with soreness and this is a blow to a young player who was slashing .333/.443/.644 with a 1.087 OPS.

Jo Adell was recalled from Salt Lake and should see regular playing time in Ward’s absence. Adell was slashing .222/341/.597 with six home runs and 15 RBIs in 19 Triple-A games before joining the Angels.

The Mets' Tylor Megill (biceps) threw 3.2 innings in his rehab start for AA-Binghamton and gave up a couple of runs on three hits and zero walks. The start was promising because Megill hit 98 mph with his fastball on the radar gun. The Mets plan on one more rehab start for the right-hander before a return next week.

Good news for the Cardinals and their fans as Jack Flaherty pitched three perfect innings on Sunday with three strikeouts in his first rehab start at AA-Springfield. It is the first time Flaherty, who is on the 60-day injured list, has thrown a ball in an organized game this year and he looked like he was in mid-season form throwing 21 strikes on 30 pitches. He’s still a ways off and will require a few more starts before re-entering the Cardinals rotation.

Keep an eye on the latest MLB weather report with some weather issues in the Arizona/Cincinnati and Texas/Cleveland games tonight. Be sure to check out all of DFS Alarm's in-depth coverage for tonight's MLB games as well. Let's look at some MLB DFS top picks and plays for Monday night's slate of games.

Tonight is a very tough pitching slate with no real ace taking the mound. Houston Astros starter Cristian Javier is my top choice for daily fantasy baseball lineups as he brings his 28% strikeout rate (34% in the last five starts) to the Mariners and is a big favorite (-163). San Diego Padres lefty Blake Snell may be popular in a matchup with Carlos Carrasco and the Mets, but I respect the NYM offense too much. So why not give Carrasco a shot in the game with the lowest run total (7)? He has won four of his last five starts with a 2.97 FIP.

Robbie Ray is a volatile pitcher and even if he strikes out 10 batters, he is susceptible to a couple of home runs. This sets up well for the Houston Astros lineup tonight. Jose Altuve is 6-for-14 lifetime off the southpaw and should be included in all stacks along with Alex Bregman, red-hot Yordan Alvarez, and Kyle Tucker.

It all depends on which Blake Snell shows up – the good or the bad one. When Snell is off his game, he will get hit hard and I am banking on the Mets offense to jump all over him early. Pete Alonso and Starling Marte should anchor the stacks with some Mark Canha, J.D. Davis and Francisco Lindor sprinkled in.