Fantasy Baseball June 29 Round Up: Brandon Woodruff Dominant in Return 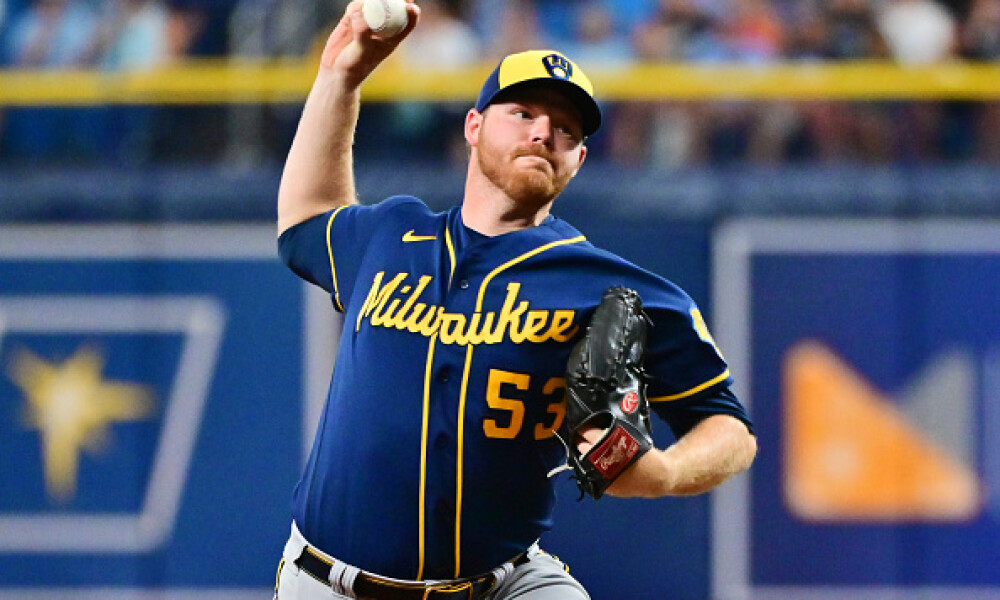 Tuesday’s Major League Baseball action was highlighted by the many players returning from injuries, and also many more players dealing with new injuries. We also had some usual suspects like Yordan Alvarez and Kyle Tucker go off in New York. Charlie Blackmon rocked Clayton Kershaw. Robbie Ray shut down the hapless Baltimore Orioles. But injuries to players like Jazz Chisholm Jr, Zach Eflin, and Michael Brantley are what dominated the fantasy news cycle.

Brandon Woodruff Returns and Strikes out 10

The only thing standing in the way of Brandon Woodruff completely shutting down the Tampa Bay Rays on Tuesday was the 15-day layoff he just exited. The Brewers only let Woodruff throw 76 pitches, but it was good enough for five innings, one run allowed, and 10 strikeouts.

Woodruff showed no signs of decreased velocity or pitch movement from the mysterious hand injury he suffered earlier this month. With those concerns fully behind him, and the velocity not an issue, fantasy managers can expect Woodruff to retake his place among the top 15 pitchers in baseball.

Jonathan India went 2-for-5 with a home run and three RBI on Tuesday in what was clearly his best game since returning from injury two weeks ago. It was his first multi-hit game since April 29th and the first time he has scored multiple runs in a game all season.

Hopefully, this game was the launching pad India needs to get his season going. For someone who ended the draft season as a top-85 pick, injuries have derailed what was supposed to be a strong sophomore campaign. In Yahoo fantasy leagues, his roster percentage is somehow only 76%. Run, don’t walk, to see if he is available in your league.

The months of April and May were absolutely abysmal for Marcus Semien, but June continues to be his coming out party for the Texas Rangers. On Tuesday, he went 3-for-4 with a homer, three runs, and four RBI. That’s now a .288/.333/.519 slash line in June and the .852 OPS this month is almost double his OPS from April (.443).

Semien hit third in the order for the first time this season last night. The Rangers are going to give stud prospect Josh Smith a look in the leadoff spot for a while, which could give Semien additional RBI opportunities going forward.

A.J. Minter Gets the First Atlanta Save Without Kenley Jansen

After Kenley Jansen landed on the IL with an irregular heartbeat, speculation was rampant about who among the Atlanta Braves’ relievers would pick up save opportunities. All of Will Smith, A.J. Minter, and Collin McHugh seemed to have a case, but the first save chance went to Minter.

Minter has been outstanding this year with a 1.64 ERA and 12.00 K/9. But don’t blow the FAAB bank on Minter or any other Braves’ reliever in free agency. The prevailing thought is Jansen will return when he is first eligible on July 13th.

Patrick Corbin Comes Back from the Dead

It has decidedly not been a good season for Patrick Corbin this year. His 6.06 ERA and more than 3.3 walks per nine innings are among the worst ratios for all starting pitchers. But he turned in a vintage performance last night with eight innings, one run, 12 strikeouts, and a WHIP under 1.00.

Corbin hasn’t been absolutely terrible in June, with a 4.28 ERA and 27 strikeouts in 27 innings. But he is still allowing a .563 slugging percentage this month. The larger takeaway from last night is that the Pittsburgh Pirates have become a no-doubt-about-it team to stream against in daily leagues and in DFS.

Fantasy managers aren’t going to throw Robbie Ray any parades for shutting down the Baltimore Orioles at home on Tuesday night, but it continued a streak of sublime pitching from Ray over the last two and a half weeks.

Ray finished the night with seven innings, one hit allowed, three walks allowed, and eight punchouts. In each of his last four games, Ray has gone at least six innings and not allowed more than one run. After a roller-coaster month of May, June has been much kinder to Ray and has gotten him back on track to look more like the pitcher Seattle shelled out $115 million to in the offseason.

Bryce Harper Will Have Surgery on Thumb, Miss Six Weeks

The official recovery and rehabilitation plan for Bryce Harper’s fractured thumb was announced on Tuesday. He will have surgery on the finger and miss approximately six weeks. The loss of Harper for essentially half of the remaining season is a massive blow for fantasy managers as he was having another MVP-caliber season. The Phillies will play a combination of Mickey Moniak and Matt Vierling in Harper’s absence which is obviously a Liberty Bell-sized downgrade.

Michael Brantley Lands on the IL

After exiting Sunday’s game with shoulder discomfort, Astros outfielder and batting average stalwart Michael Brantley was placed on the IL on Tuesday. Missing their typical number two hitter, the Astros promoted hotshot rookie Jeremy Peña to that position and Yordan Alvarez moved up to the third spot for the first time this season. Chas McCormick was called up to replace Michael Brantley on the roster.

Tommy Pham Scratched with Back Injury

Close to the time the Cincinnati Reds’ game was scheduled to start on Tuesday, Pham was scratched with lower back tightness. This was likely just a precaution for an injury that Pham has suffered through in the past, and there should be a fuller update on Wednesday. Pham has once again proven to be a fantasy asset with 10 homers, five steals, 43 runs, and a 12.5% walk rate in 64 games. But at age 34, these days off may start to look more and more common throughout the second half.

Beyond the Bryce Harper injury, the Phillies also now have to deal with losing a major piece of their starting rotation for two weeks. Zach Eflin goes to the IL with a knee problem, but he does not believe he will need to be out for the long term. The MRI Eflin underwent did not turn up anything serious, so this is hopefully just a rest and recovery situation. Eflin is eligible to return on July 11th.

Jazz Chisholm Jr. Leaves Game with Another Back Injury

It’s deja vu all over again for Jazz Chisholm who was forced to exit Tuesday’s game early after aggravating a back injury that kept him out of games Sunday and Monday as well as earlier in the season. The Miami Marlins may view this as something more chronic, so don’t be surprised to see Chisholm hit the 10-day IL so Miami can give him a chance to fully heal.