Fantasy Baseball June 23 Round Up: Shohei Ohtani Makes History and Austin Hays Hits for the Cycle 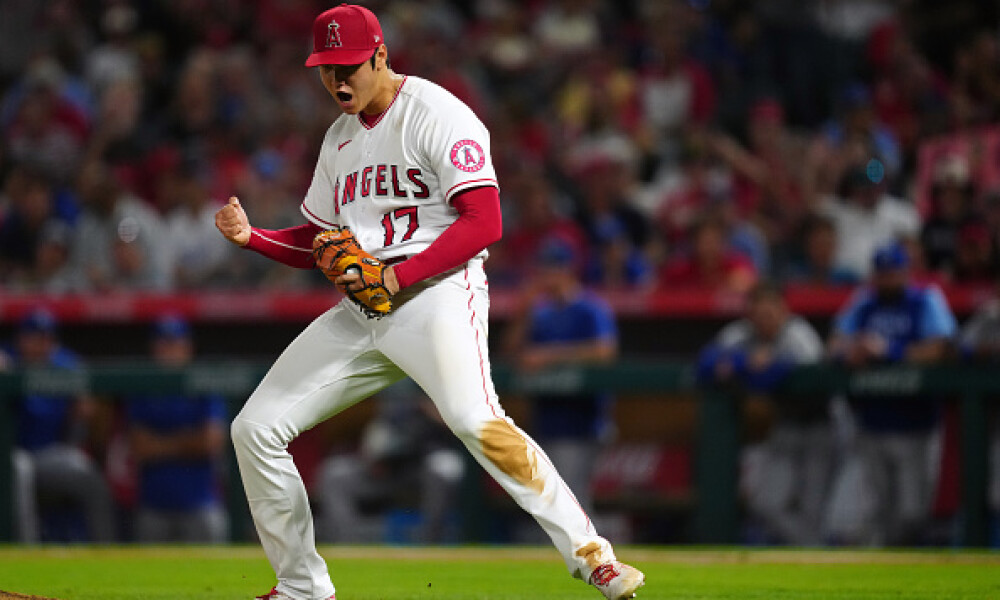 What a Wednesday night of Major League Baseball! The game’s biggest and brightest stars were on full display. Shohei Ohtani may not have posted the most strikeouts in a game in MLB history, but he did make history with exceptional performance in back-to-back nights against the Kansas City Royals. Despite a rain-shortened game, Austin Hays hit for the cycle in just four at-bats, and Jorge Alfaro’s recent hot streak has him trending towards one of the more popular fantasy baseball waiver wire pickups. What else happened? Oh, well Aaron Judge won’t stop hitting home runs, the Cleveland Guardians have won 18 of their last 23, Jeter Downs made his Major League Debut for the Boston Red Sox, and Madison Bumgarner registered his 2,000th career strikeout. Unfortunately, Carlos Carrasco became the latest Mets starter to succumb to an injury, and fantasy baseball managers are anxiously awaiting Lucas Giolito to start performing like the fantasy ace he was ranked as in preseason fantasy baseball rankings. After a look back at all of yesterday’s action, I will give you my favorite player props and best bets for Thursday, June 23rd.

Austin Hays Hits for the Cycle

Four at-bats. Four hits. Single. Home run. Triple. Double. The game was shortened due to rain, but it didn’t matter, as Austin Hays only needed four at-bats to complete the feat and became the sixth Oriole to ever hit for the cycle.

Prior to last night’s performance, Hays had just four hits in his previous seven games total, and was sporting just a .230 batting average with a .309 wOBA. Last night could be a catalyst for Hays and break him out of this June skid. Overall for the year, Hays is now hitting .287 with 10 home runs, 40 RBI, 37 runs scored and one stolen base.

Kansas City is probably sick of seeing Shohei Ohtani at this point. Despite taking two of three from Los Angeles, Ohtani stole the show in this series. After hitting two home runs and driving in eight runners, Ohtani wanted to one up himself, so he went out and fired eight shutout innings with 13 strikeouts. He generated a total of 14 whiffs, seven of which came from his slider.

With last night’s exceptional performance, the two-way superstar became the 1st player in Major League Baseball history with both an 8-RBI game and a 13-strikeout game in their career. Ohtani did it within 48-ish hours.

That San Francisco ruined what was a masterful performance from Carlos Rodón, as the southpaw allowed just one earned run on three hits and one walk with 10 strikeouts over seven marvelous innings in Atlanta. He posted whiff rates of 45 percent and 36 percent on his slider and fastball respectively, en route to generating an insane 23 whiffs on 57 swings! Yes, Atlanta has had their issues with strikeouts this year, and after a rising expected wOBA through 2022, it’s on a sharp decline, thanks to a 1.20 ERA and 0.83 WHIP in the month of June. 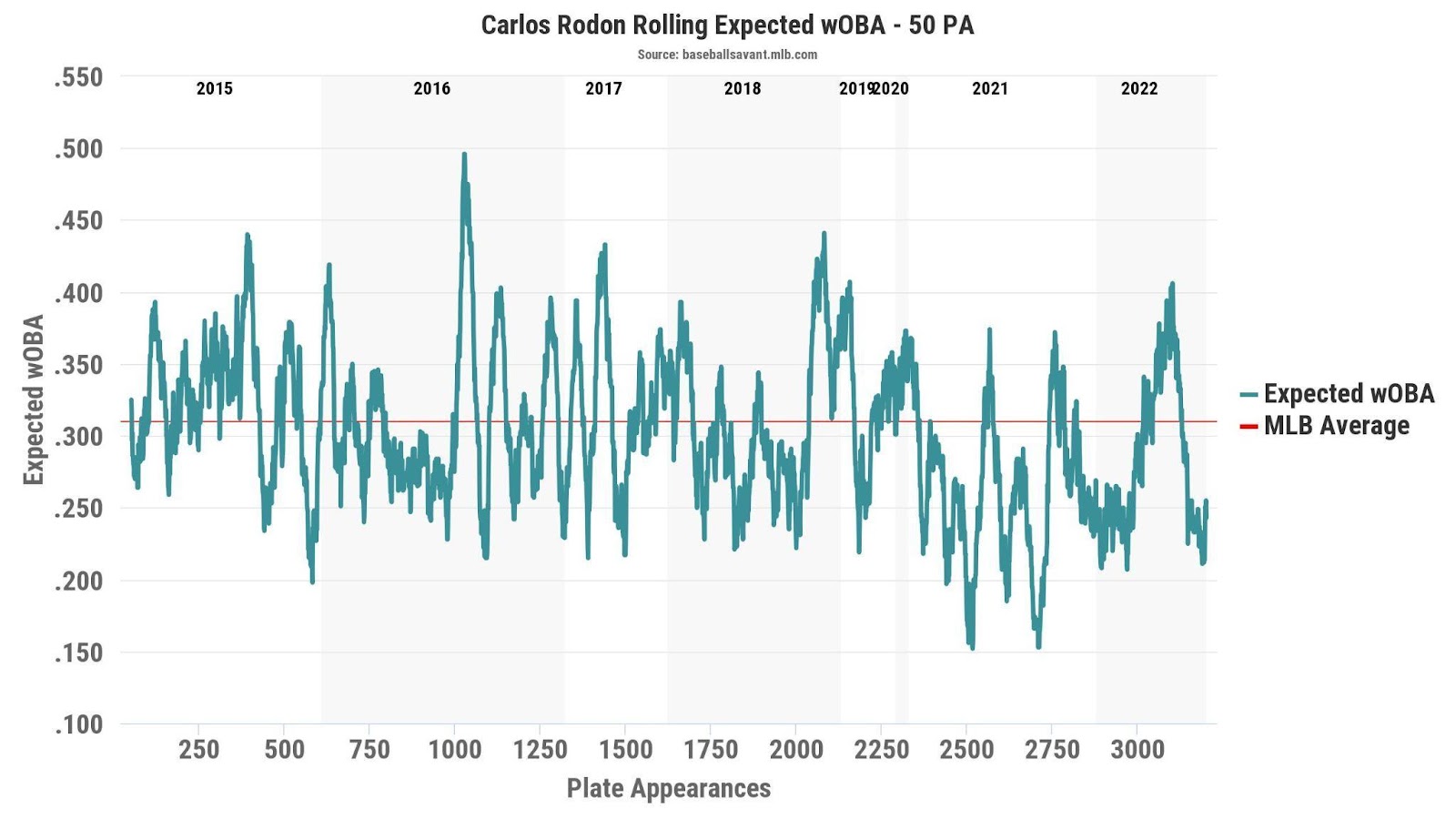 All Rise! Aaron Judge Does it Again

It almost feels like “Judge homered again” should just be copied and pasted into every single one of these on the site. Aaron Judge enjoying a sensational start to the year, and it couldn’t come at a better time for Judge as he bet on himself prior to the season.

There really isn’t much to say about what Judge is doing, other than it’s his world right now, and we are all just living in it. He’s hitting .302 with 27 home runs and five stolen bases through 67 games on the year 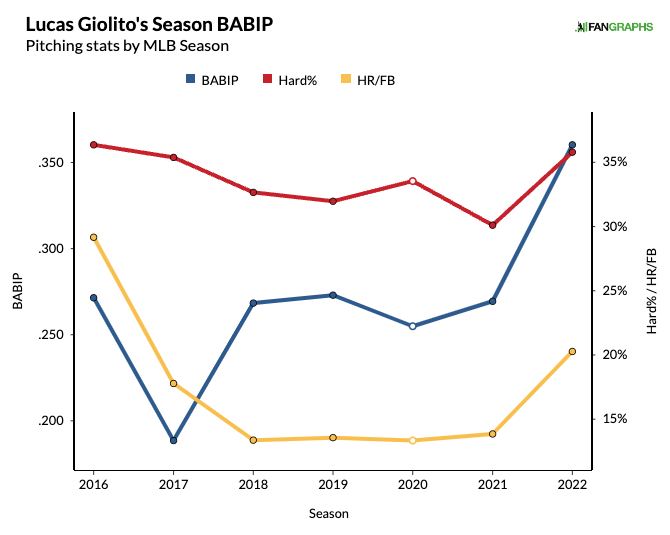 His 5.09 FIP and 3.73 xFIP could indicate some minor progression to the mean could be in store, but in terms of pitch velocity, whiff rate, spin rate, there’s nothing really substantial that sticks out to explain this. Can we point it all to bad luck? Maybe, but the first step might be tweaking the arsenal to fare better against right-handed hitters, as they have a .344 average and .465 wOBA against him in 2022. Giolito has allowed four or more earned runs in four of his last five starts, but he was solid to open the year, so perhaps this is just a cold stretch for the veteran righty. To be fair, two starts against Toronto and one against Houston isn’t exactly the easiest path, but not dominating Texas and Tampa Bay was a bit underwhelming.

Time to Pick Up Jorge Alfaro (If You Haven’t Already)

Jorge Alfaro has shown he can be productive behind the dish for fantasy baseball purposes when given the chance to play nearly everyday. That was the issue with the Padres this year, was where is he going to play? Well, he’s catching a lot more of late, and he’s made the most of every opportunity. Since really stepping into a full time role back on June 11th, Alfaro has hit .343 with a 203 wRC+ and he has three home runs, six RBI and six runs scored. He has a 98th percentile max exit velocity on the year and he’s really cut down on the strikeouts of late. Alfaro had eight stolen bases back in 2021, so as long as the at-bats are there, he should provide solid pop and a little bit of speed from behind the dish, which is quite nice. He must be owned in deeper formats, and especially in two-catcher setups. Alfaro is owned in just 3.9-percent of ESPN fantasy baseball leagues, 12-percent of Yahoo Fantasy leagues, and 19 percent of CBS fantasy leagues.

Carlos Carrasco Exits with Back Tightness

After recording just seven outs, Carlos Carrasco left the game with lower back tightness, and he became just the latest Mets starter to get bit by the injury bug. An MRI in the near future will reveal more and provide more clarity on his timeline. This injury comes at inopportune time for Carrasco, the Mets, and fantasy baseball managers as Carrasco was pitching well of late, as he had an 11.35 K/9 over his four starts in the month of June with a 3.48 FIP and 2.94 xFIP.

I wanted to chase some bigger money with the over 1.5 hits, which I do believe is in play, but I’ll play it a bit more conservative here with the 1.5 total bases. Luis Arraez is hitting .364 in the month of June with two or more total bases in four of his last five contests. Overall for the 2022 season, he’s hitting .355, and he has a .399 average and .988 OPS against right-handed pitchers. Well, he’s 3-for-8 in his career against Zach Plesac, who has allowed lefties to hit .299 with a .372 wOBA against him. Also, this game is in Minnesota, where Arraez is hitting .376 with a .944 OPS, and Plesac has stunk on the road, posting a 5.57 ERA in six starts. Plesac’s numbers look fairly good in June, but two of your three starts coming against Baltimore and Oakland will play you up a bit.

Over the last two weeks, the Chicago White Sox have the highest batting average as a team, and they come in 12th overall against righties for the year in that department. Dean Kremer has a 2.35 ERA on the year, but his 3.63 xERA and 3.46 FIP means that he’s pitching a bit over his head at the moment. Also, this year, Kremer has faced the Rays, Royals, and Guardians. Which do you want to put more stock in, his 2.35 ERA over three starts this year, his 7.55 ERA in 13 starts last year, or his combined 6.84 ERA and 2.12 HR/9 in 17 starts spanning the 2020 and 2021 seasons? The White Sox are going to put up some runs today, no doubt about it.