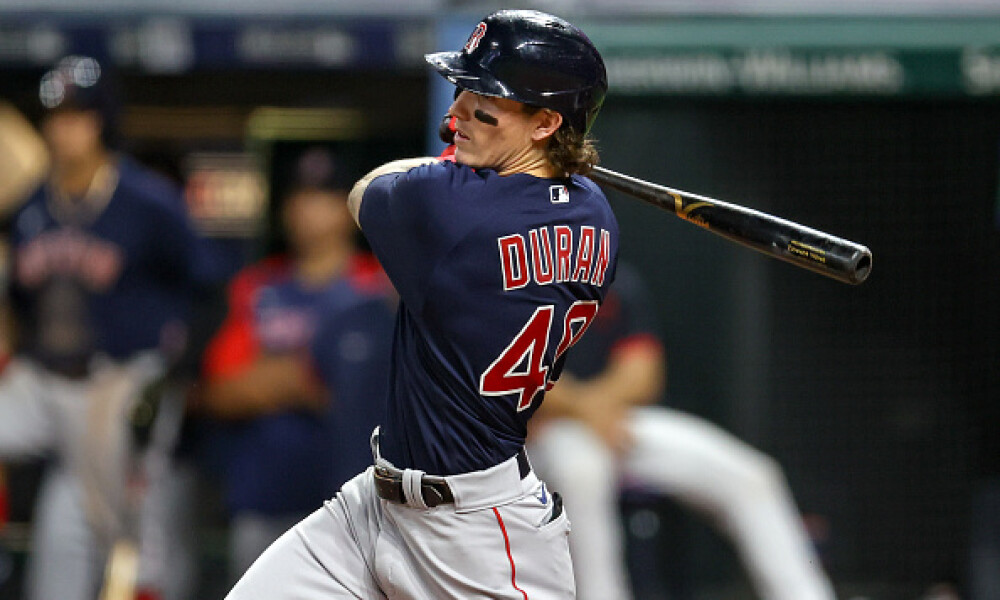 While the 2022 MLB season is in full swing, the minor league baseball campaign has also been underway for a few weeks now. We've already seen those MLB prospects we had ranked highly in our fantasy baseball player rankings and fantasy baseball rookie rankings get tons of hype and it's possible some come up to the MLB soon and likely be hot commodities on the fantasy baseball waiver wire. Nolan Gorman, namely, is getting a lot of heat there and the St. Louis Cardinals' youngster could be the next great MLB rookie. Who are some other minor league hitters who have been smoking the ball so far? Who are some pitchers who’ve been wiping the floor, or the plate, with opposing batters? Now is a great time to look at who’s been hot at Double-A and Triple-A and rising up the Top 300 MLB Prospect rankings.

Boston, and prospect hunters alike, have been waiting on Duran to show some life with his bat. That’s happening. It started last year, continued through the Arizona Fall League and Winter League, and it's happening now at Triple-A. Through 13 games played, after missing time due to COVID-19, he’s slashing .360/.458/.560 in 50 at-bats with one homer, 12 runs, six RBI, and seven steals. Duran isn’t known for his power, so the lack of pop isn’t concerning. Speed is what he’s known for. That’s showing. As is his defense. Over the last year, Duran has worked on a new approach that is making him more patient at the plate and bringing his contact rates up. The Red Sox offense is struggling mightily right now and Duran might not be in the minors for much longer with his hot start.

Martin has been a slow-burn type of prospect since being taken in the 2017 MLB Draft. Following the COVID-19 pandemic, he’s been reinventing himself and finding the offensive skill that made him an interesting 17th-round pick. In terms of pop in his bat, he’s second only to Oneil Cruz in the Pirates’ organization as the hit tool is still coming around. Through 17 games this year, he’s hitting .323 with three homers, eight doubles, and four triples. That means out of his 21 total hits, 15 of them have been for extra bases. The batting average will drop but, over the last two full seasons, Martin has hit 60 long balls. He is the future first baseman in Pittsburgh and perhaps that happens in the second half of this year.

Not to make a run of Pittsburgh prospects here, but a few guys are starting hot. Mitchell, who was drafted in the second round of the same 2017 Draft as Mason Martin, is coming into 2022 looking to prove he can sustain the glimpses he’s shown. He’s started off hitting .333/.403/.593 with three home runs, five doubles, 12 RBI, seven runs, and four steals this year. The challenge for Mitchell is proving his offense can carry his game since his arm is fringy and the defense is only so-so, which doesn’t help at PNC Park. The offense is there, though, for him to be a 20-homer, 10-steal outfielder.

Lewis is a year behind where he should be at this point since he lost last season to a torn ACL. He’s quickly making up for the lost time, though. The former No. 1 overall pick has been spectacular in the minors when healthy and he’s showing that again this year, starting out with a .309/.407/.559 slash line and two homers, 15 runs, 10 RBI, and three steals so far. He grades out as a five-tool prospect with his best tool being the 70-grade, or double-plus, speed. His natural position is shortstop, but they’ve moved him to center field as well. That could be his long-term position in Minnesota when he comes up, given the Twins' deal with Carlos Correa. Overall, he’s a .280, 20-25 home run, 30-plus steals bat.

Langeliers is making a nice first impression on his new team after he was sent to Oakland in the Matt Olson deal this offseason. So far he’s gotten off to a blistering pace at Las Vegas Triple-A with a .288/.382/.593 slash line and five homers, 12 RBI, and 11 runs in 16 games. The power is his calling card, at a 60-grade tool, and he's coming off an impressive 22-homer season in 2021 at Double-A in the Braves' organization. Even if the pop doesn’t show up right away, he’s been great defensively behind the dish and threw out 42-percent of would-be base stealers last year. Sean Murphy has struggled with the bat over the past year or so, and we could see Langeliers up in the second half for Oakland.

It’s hard to imagine forgetting about a guy whose game has been comped to George Springer and Hunter Pence – but that’s what’s happening with Haskin. He had an impressive full-season debut last year and has started off hot this year at Double-A Bowie. Through 13 games, he’s hitting .386 with four homers, 12 RBI, and 10 runs. The steals haven’t shown up yet, but they will as he's coming off a 22-steal campaign a year ago. Overall, the skill set of an average hit tool, slightly below-average power, and double-plus speed puts him in center field long-term defensively. Expect a stat line of .270 batting average, 10-15 home runs, and 25-35 steals while hitting basically anywhere but the middle of the lineup.

It’s been a bit of a winding road for the international prospect who signed back in 2015. Since becoming healthy over the last two seasons, Encarnacion's talent is starting to show through. Let’s be clear off the bat, though – he’s not a top prospect, by any means. He’s simply a guy who is perfecting a couple of skills. Encarnacion has very good raw power and a solid outfield arm. However, the rest of the skill set is below-average. So far through 17 games at Double-A Pensacola this season, he’s hitting .343 with six homers, 16 runs, 11 RBI, and three steals. The steals won’t stay a part of his game. There is a ton of swing-and-miss in his approach as well. Since 2019, Encarnacion has had 810 at-bats and struck out 262 times for a 32.3-percent K-rate. If the homers keep up, he profiles as a DH bat for Miami, but nothing more, while really only hitting about 20-25 homers a year.

After spending seven years in the Rays' minor league system, Gomez signed a free agent deal with St. Louis this offseason. That’s paying dividends already this year. He’s started as hot as you can be at Double-A Springfield with 10 homers in 15 games and a .423 average. Sometimes a change like this is good for a 23-year-old power bat. The power is real though. He grades out at least at 55, if not 60, on the 20-80 scale. The issue with him has been his K-rate skyrocketing to 38.2-percent last season in the Tampa system. If this is the start of a different approach at the plate — he’s down to a 22.4-percent K-rate — he could be a guy worth looking at in dynasty leagues. The Cardinals have a knack for finding diamonds in the rough and Gomez could be the next one.

Currently the Brewers’ top pitching prospect, Small was a 2019 first-round pick and hit the ground running in 2021 – and even more so in 2022. Using a four-pitch mix of a plus fastball-changeup combo and mixing in two distinct breaking pitches, he looks to be a No. 4 starter in the majors. A few things can help him become more than that, though. First, if he keeps his strikeouts where they’ve been the last two seasons – 92 in 77.1 innings last year and 24 in 18.1 IP this year. Second, if his walk rate stays low – unlike last year's 13.3-percent clip. Third, if one of his breaking pitches develops to better than a tick below average. A high-strikeout command and control lefty is an intriguing addition to the Brewers' rotation and he should be there mid-year this season.

Is it a shock to see Meyer having a good start? He’s one of the top pitching prospects in baseball and, frankly, was expected to have a shot at making the Marlins' roster out of Spring Training. That didn’t quite happen. He’s now making sure Miami is paying attention to him with a 1.71 ERA and 0.80 WHIP through five starts and 26.1 innings on the mound. He’s also posted a 33:6 K:BB ratio. The hype has been real for Meyer since the Marlins drafted him in the first round and there's talk that he could wind up in the late innings. That’s not going to happen now. He’ll be a starter when he comes up and should stay in the rotation as a frontline anchor of the new-look Miami rotation. If he’s still available in your league, and you have a bench spot to kill, Meyer is an intriguing add for a June call-up.

The Dodgers’ third-round pick in 2019 got his first taste of Triple-A last year after being a standout at the alternate site in 2020. That taste didn’t go so well. Pepiot has made adjustments this year, though, and it’s been showing in spades through five starts. Over 21.2 innings, he’s posted a 1.66 ERA, 1.06 WHIP, and a 29:9 K:BB ratio. The main pitch in his arsenal is his elite changeup. Just how elite? It’s the best changeup in the entire minor leagues. Yep. That good. The fastball is also above-average when he’s controlling it, and the slider has some good bite too. Those three pitches are enough to make him a No. 3 starter but if the fastball control is off, he could be in for rougher outings. Given the struggles that Pepiot saw late last year in Oklahoma City, the Dodgers might let him ride a bit longer at Triple-A this year until they absolutely need the pitching help. Even then, he might not make the best fantasy pickup in the second half as L.A. is likely to limit his innings and not make him a full starter right away.

Wait? We’re not talking about Luis Gil or Clarke Schmidt or Luis Medina as a Yankees pitcher prospect? Nope. Waldichuk is the southpaw drawing our attention this week. He was a fifth-round pick in the 2019 Draft and has since been improving his offerings, including adding velocity. Waldichuk runs with a four-pitch mix of a fastball, curveball, slider, and changeup – all with average to plus grades. In his first full season across two levels in 2021, he was fourth in the minors with 136 strikeouts in 110 innings. He’s on that pace again in 2022. Through four starts and 18.2 innings, he’s posted a 28:6 K:BB ratio with a 1.45 ERA and .86 WHIP. The lefty has now thrown 98 innings at Double-A Somerset, including last year, and has struck out about a third of the batters he’s faced. He should make the jump to Triple-A shortly and is perhaps an August call-up candidate for the Yankees.