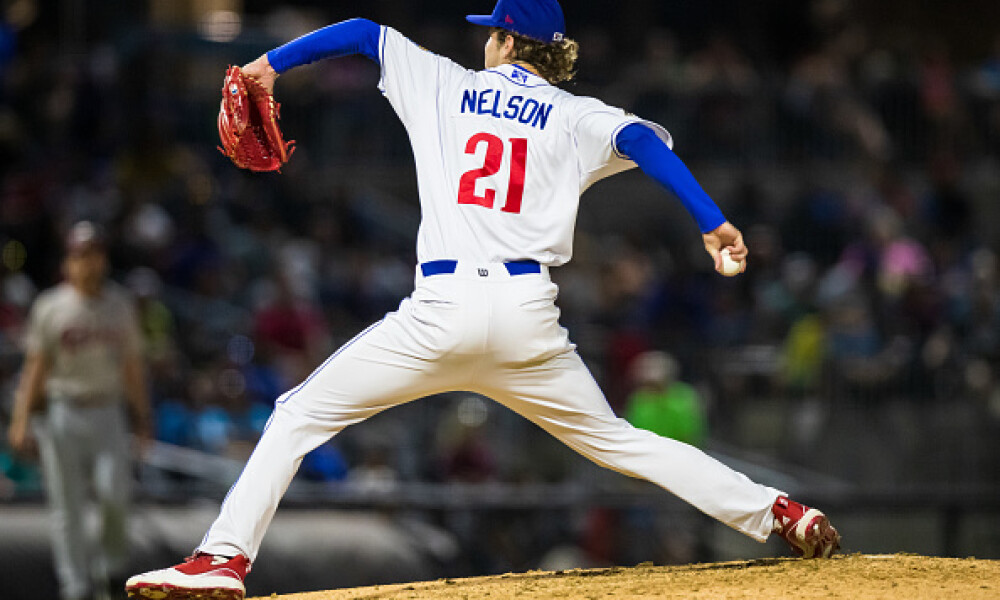 Both the MLB and MiLB seasons have been underway for about a week and a half now. That’s a great time to update the Top-300 Prospects list – and it's just what we did this week. Getting your hands on the next great MLB prospect is how you stay ahead of your league mates and win fantasy baseball titles. We’ll be talking about the biggest risers and fallers in the latest top-300 prospect list. Then, we’ll finish the piece off with the best prospects to invest in.

MLB Top Prospects On The Rise

A guy who’s made the biggest jump on the list from being well outside the top-100 to inside the top-100 is Ryne Nelson. The fireballer has been steadily moving through the Diamondbacks’ system since being taken in the second round of the 2019 draft. He features three plus-pitches and a fourth that flashes above-average at times. The anchor of the arsenal is the 70-grade fastball that not only sits comfortably in the upper-90s but also has run to it. The curveball and slider are two distinct breaking pitches and both are out pitches to either lefty or righty hitters. In college, Nelson was used as a reliever before transitioning to a starter in the pro ranks. The 163 strikeouts over just 116.1 innings last year say he’s got the stuff to be a No. 2 starter. Nelson might be hitting his ceiling sooner rather than later as he starts at Triple-A in 2022.

We’ve all gotten a shot to see Spencer Strider in the pros with Atlanta to start the 2022 season. He’s been very solid in relief for the Braves to this point, and that could be where he ultimately winds up. Before we get there, though, let’s focus on his repertoire of three pitches that starts with his double-plus fastball. It routinely hits triple-digits with some bite to it – as if the velocity wasn’t enough to start with. The slider is of the wipeout variety and pairs very nicely with the heater. Those two pitches led to a 14.6 K/9 rate in the minors in 2021. Strider does have a changeup that he throws occasionally, but it’s not an MLB-average level pitch yet and limits his upside. If he doesn’t improve the control — he had a 3.8 BB/9 rate in 2021 — and improves his third pitch, he’ll be a high-leverage reliever.

Hold up…it’s the second Prospect Report of the season and we’ve got a second Guardians pitcher in here? Well, they’re just that deep of a system and you’re going to love what happens a few sections down. Williams was drafted in the first round of the MLB Draft last year after having been a one-year starter at ECU. His final college season and his first year in pro ball have been a different story completely complete. Williams’ stuff has made a huge jump in quality and control across the board. The fastball gained life and movement while the curveball gained depth – with both being plus pitches now. The slider and changeup improved as well to above-average on the 20-80 scale. Williams is at High-A Lake County for the moment but could be a fast riser through the Cleveland system. He has the upside of a number-two starter.

The 2019 version of Jeter Downs is about the best we’ll see from him. He hit .276 with 24 homers and 24 steals in 119 games that year. Since then, it’s been a whole different story. In 2021, he hit just .190 while managing 14 home runs and 18 steals over 99 Triple-A games. This year, he’s struggling again. The problems start with his approach. Downs’ plate discipline has disappeared nearly completely. In the 119 games in 2019, he posted 107 Ks and 60 walks. In the 109 games since? A total of 152 Ks and 42 walks in 60 fewer at-bats. Downs has also been blocked by Boston's signing of Trevor Story to a long-term deal and Xander Bogaerts still at shortstop for the Red Sox. Outside of a defensive middle infielder, it’s hard to see the upside here.

The buzz about Austin Martin coming out of Vanderbilt was huge, even when some teams passed on him at the top of the draft. Now though? They look smart for doing so, including the Blue Jays for dealing him away for José Berríos. Martin came in as a guy whose main skill was that he could play a ton of different positions without an overwhelming offensive ceiling. Now that he’s pretty much been limited to just two positions, the lacking offensive upside is starting to show. To be clear, Martin has good contact skills and above-average speed – but little pop. That won't make him a fantasy-relevant prospect. He’s essentially a new version of David Fletcher or Taylor Ward…exactly, not much value there.

Sorry to pick on the Twins here, but Simeon Woods-Richardson is also starting to falter as another prospect received in the Berrios deal. The velocity has fallen off — down to just 91 mph on the fastball — which also means the secondary stuff isn’t as effective. While he’s just 21 years old, there’s still time for him to get back on the right track. Without the uptick in velocity or better control, though, it’s hard to see him regaining his standing. Speaking of the control, reaching Double-A hasn’t helped Woods-Richardson as his walk rate has shot upward when facing more advanced and patient hitters.

Top MLB Prospects To Invest In

There’s been a pretty good history of Australian baseball players coming up and succeeding in the majors – and Curtis Mead could be the next one. Mead has been a rising star in the Rays’ system since he joined them following a 2019 trade. Last season was a great showcase for the up-and-coming third baseman, as he played 104 games across three levels while posting a .321/.378/.533 slash line with 15 homers, 77 runs, 69 RBI, and 11 steals. In 2022, he’s picked up right where he left off over eight games at Double-A this season. With Mead getting as many reps as possible at third base, he should be up late this year or early next year to be Tampa's starting third baseman as the Rays' next batch of prospects start rolling up to the majors.

If Yoelqui Cespedes’ last name sounds familiar, it’s because it should. He’s the younger brother of former All-Star Yoenis Céspedes. While the hit tool isn’t quite as good as his older brother, the rest of the skills are all there for the outfielder. So far in 82 games in the White Sox system, Yoelqui has slashed .283/.343/.476 with 11 homers, 55 runs, 34 RBI, and 18 steals. That being said, the speed is more above-average but plays up due to his intuition on the base paths. Cespedes will have to watch his K-rate as he progresses through the system and doesn’t get caught trying to press too hard when he’s in a slump. All told, though, he has the skills to be a .260 hitter with 25-30 homer pop and 15-steal upside.

Another Cleveland pitcher? Just how deep is this system? Well, my rankings have them as the tops in baseball. Payton Battenfield is a key part of that as well – that is since he got to Cleveland. He’s been traded twice already since being a ninth-round pick in 2019, but he seems to be settling in quite well at Triple-A Columbus. The four-pitch mix that Battenfield uses has been effective over his 157 innings to the point of a 2.29 ERA, .176 BAA, and a 189:38 K:BB ratio. None of his stuff is overpowering in its own right, but the combined package results in a number-three starter at the high end and number-four starter as a floor.

This is what I wrote about Elly De La Cruz in August of last year in the Prospect Report:

“De La Cruz has had the luxury of developing in a system that doesn’t usually get a lot of attention. The 19-year-old was a J2 signing in 2018 and he’s impressed at every step so far both in Dominican Summer League and stateside and the belief, including from myself, that he’s a five-tool prospect in the making. He’s still pretty lanky at 6’2” and 150 pounds but that hasn’t slowed him down in terms of the stats department with a .327/.368/.645 slash line, five homers, 22 runs, 18 RBI, and four steals in 26 games. Right now the power is the worst tool at just below-average but that’s mainly because of the lack of muscle on the frame and as he starts to fill out physically, the power and the rest of the skills will all improve.”

Since then, De La Cruz is now listed at 6’5” and 200 lbs. and slashing .293/.343/.483 with 10 homers and 16 steals over 166 games. At just 20 years old, he’s still filling out and rounding out his raw skills – but the early returns are highly impressive. If you are in a competitive dynasty league or just want a future five-tool stud with a very good home park, grab him now. Oh, and his raw power, just like all the tools, is now at least above-average.