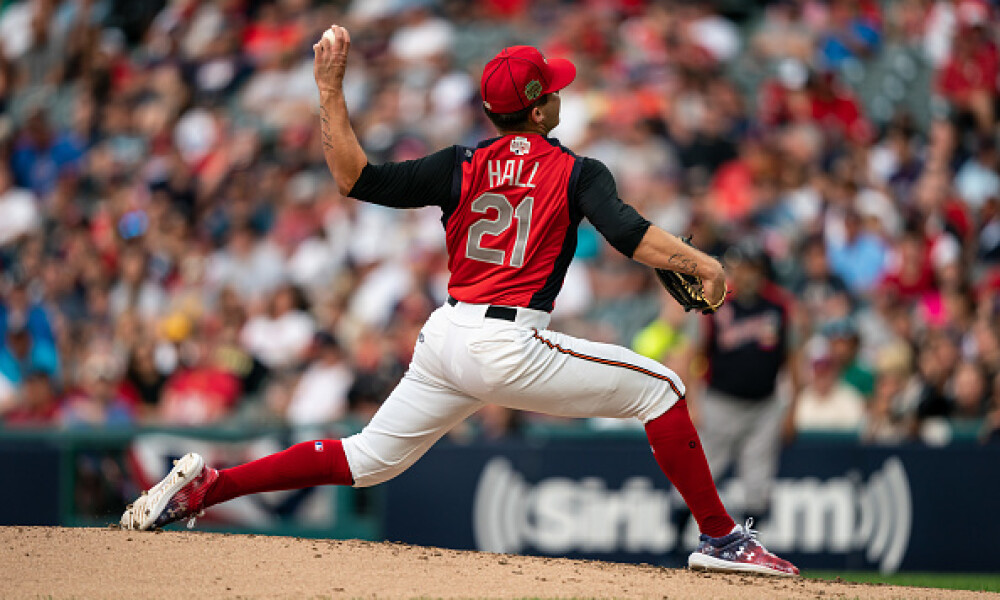 Taken 15th overall in the first round of the 2020 draft out of the Oregon high school ranks, Abel was the best prep arm in the draft. The repertoire shows off why he was viewed that way. He’s got a double-plus fastball that sits in the mid-90s with tight spin while the secondary pitches are all above-average as well in terms of the slider, changeup, and curveball. At 6-foot-5, Abel has the frame to be the frontline starter and the stuff indicates he can be. So why isn’t he a bona fide top pitching prospect just yet? The control. Abel has been inconsistent at finding the strike zone so far in the Phillies' minor league system with 42 walks in 81.2 innings. That struggle to throw strikes, though he has struck out 117 hitters in that span, has led to some crooked ERA numbers and a bit higher WHIP than he should have. If the control shows up, get ready to see Abel at the top of the Phillies rotation in short order next to Aaron Nola and Andrew Painter.

It’s hard to imagine the Blue Jays having a hitter as good as Martinez remaining under the radar. However, when the Blue Jays have guys like Bo Bichette, Vladimir Guerrero Jr., and Alejandro Kirk – it’s easy to forget minor leaguers. We shouldn’t be making that case with Martinez though. The 6-foot-1, 200-pound infielder is a power-first bat who will likely move to third base ultimately in the bigs. The 60-grade power is his calling card but the 50-grade hit tool is a bonus too. Martinez has played 182 games in the minors and launched 49 homers with 154 RBI and 111 runs scored. The average hasn’t been great so far at just under a .260 mark, but we’ll take that average and 40 homers in the majors regardless of the position he plays defensively.

With all of the success of Tampa Bay's pitching prospects, how exactly is there a pitcher falling through the cracks for the Rays? Well, Bradley was drafted in 2018 out of the Georgia high school ranks as a young senior and then took two years to get out of rookie ball. That could do it, but since then, he’s been very good. In 2021, Bradley led the minors with a 1.83 ERA over 103.1 innings across both Class-A levels. Posting a near 4:1 K:BB ratio was also fantastic at 123:31. Now at Double-A Montgomery, he’s started 10 games this year with a 2.18 ERA and 0.93 WHIP, and 58 strikeouts over 45.1 innings. Using a mid-90s fastball, upper-80s slider, and a true 12-to-6 bender, Bradley has been good at keeping hitters off-balance while mixing in an average changeup occasionally. The repertoire is good enough to profile as a No. 2 starter with ace-type stuff behind Shane Baz and Tyler Glasnow in the Tampa rotation. Get him on your rosters now if he’s still hanging out there in your keeper and dynasty leagues.

Signed in 2017 and nearly an Angel as part of the nixed Joc Pederson/Taylor Ward deal, Pages is putting everything together now. The outfielder is now 21 years old and tapping into his 60-grade raw power from the right side of the plate. Along with great power comes great arm strength, though inconsistent routes to actually catching the ball. Through 283 career minor league games, 48 coming at Double-A this year, Pages is slashing .265/.392/.544 with 68 homers, 218 runs, 210 RBI, and 26 steals. That fits the 50-grade hit, 60-grade power, and 45-grade speed profile. At 6-foot-1 and 212 pounds, Pages can play all three outfield spots but likely comes out as a strong-armed left fielder who’s a .265 hitter with 30-plus homers from the dish in the middle of the order.

Not only have prospect hunters and rankers alike been sleeping on Triantos, but other teams also did too in the draft. He was taken in the second round of the 2021 MLB Draft, after reclassifying in that class, out of the Virginia prep ranks, and he’s put on a show since. Possessing a 60-grade hit tool, 55-grade power, 50-grade speed, and 55-60 grade arm and field tools, the second baseman could be a fast riser in the Cubs’ system. Through his first 71 games, he’s slashing .312/.375/.466 with seven homers, 64 runs, 39 RBI, and 11 steals all while being 19 years old. As he makes it higher in the minors, the speed might drop a bit but the power should increase as he hones his stroke to drive the ball a bit more. Triantos has been comped to an Alex Bregman or Anthony Rendon type of hitter.

In this day and age, a prospect without at least average power gets forgotten about. Let’s not do that with Winn. Yes, his bat skills are still a work in progress with a 45-grade hit tool and 45-grade power trait. However, Winn has a 65-70 grade speed trait and elite-level defense. Currently 20 years old, and already at Double-A, Winn has posted a .269/.344/.418 slash line in 144 games in the minors with eight homers, 107 runs, 64 RBI, and 48 steals which all back up his scouting grades. I get we’ve mentioned several Cardinals’ prospects recently between Jordan Walker, Nolan Gorman, and Matthew Liberatore in the past two weeks, but hey, that’s just how deep and under-the-radar their farm system is at this point. Winn’s hitting has to improve, but an OBP-speedy infielder type is also pretty valuable in fantasy baseball.

He’s young. Quite young. Ezequiel Tovar was signed in 2017 and will be just 20 years old for most of the 2022 season; his birthday is in August. That’s key to understanding that he’s still progressing as a prospect. The hit tool is there at a 55-grade skill, the power is burgeoning on average the speed is above-average, and defense counts as Gold Glove quality. Speaking of the burgeoning power, there’s still more weight to add to the 6-foot, 162-pound frame and thus add pop to the swing. It’s already started happening. In the last 152 games, split evenly between Low-A, High-A, and Double-A, Tovar has 27 homers while hitting about .295. Forty steals have accompanied those homers as well. Tovar is a very tantalizing shortstop prospect who, despite being in the Rockies’ system and eventually calling Coors Field home, is sliding under the radar.

It’s easy to forget how deep the O’s farm system is. I mean we just saw Adley Rutschman come up and let’s not forget about the best pitching prospect in baseball in Grayson Rodriguez. DL Hall isn’t far behind them though. The southpaw is the sixth-best prospect in the Orioles’ system in my rankings, behind another sleeper in Colton Cowser, and ranks as the sixth-best left-handed pitching prospect in baseball. When is the last time you saw a lefty slinging the fastball at 101 mph with a filthy break to boot? The changeup is a plus pitch to go with the double-plus fastball and plays well from the same arm slot. Two different breaking pitches are mixed in too with a slider and curveball, though the latter is better than the former. The only thing holding Hall back is the control. Over his career, 246.1 innings, he’s walked 4.96 batters per nine despite striking out 12.09 per nine. Hall has the upside of a No. 2 starter and the floor of a No. 3 in Baltimore.