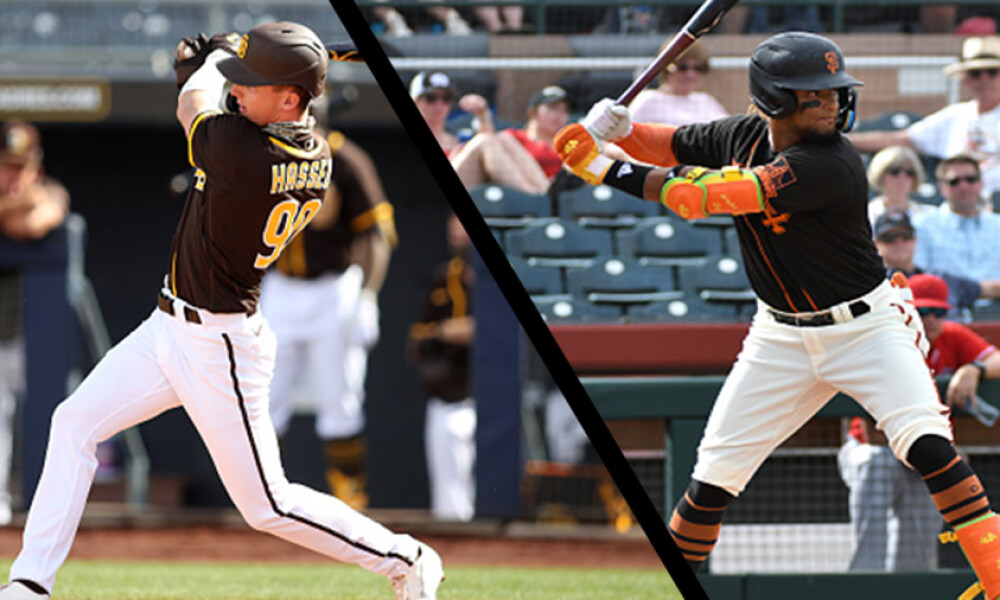 It seems like every year there are a bunch of MLB prospects that slip through the cracks when it comes to fantasy baseball rankings. It's not that these future baseball rookies aren't ranked, but rather they aren't talked about enough despite being top MLB prospects. The 2022 MLB season is no different with plenty of fantasy baseball sleepers slipping through the cracks when it comes to the MLB prospect rankings. Last week, I updated the Top 300 MLB Prospect rankings and the Top MLB Farm System Rankings. With that came some new names creeping up the fantasy baseball rankings. It also means that there are still top 50 prospects that haven’t been talked about enough. While it’s entirely possible that some of these players will already be rostered on fantasy baseball lineups in your league, there’s a chance that they’re not. Some of these MLB prospect sleepers could be top targets on the fantasy baseball waiver wire before long. Why exactly some prospects get overlooked is anyone’s guess, but that doesn’t mean they shouldn’t be rostered just the same. So with that, using the latest Top 300 MLB Prospects Rankings list, let’s dive into the guys in the top 50 who might be getting overlooked in this latest MLB Prospect Report!

How in the world does a guy reach 13th in the rankings and still not get talked about that much? Even being in a farm system like the Padres? Well, Robert Hassell managed to do just that even with being a first-round pick at No. 8 overall in the 2020 draft. The high school product hit the ground running in 2021, literally, with 34 steals in 110 games across Class-A and High-A. The bat isn’t a slouch, either, with a .303 average in 153 games to this point. The power is still coming, with 17 homers in those games, but the rest of his skillset is above-average to plus on the 20-80 scale. As he continues to mature and round out his game, he’ll either stay in center field or move to right, where his plus arm works well. Ultimately, Hassell profiles as a .290 hitter with 25-homer pop and 25-steal speed hitting in the top-third of an MLB order. If for some reason he’s still available in your keeper or dynasty league, get him now and reap the rewards in 2023.

Didn’t we just see a recent Cardinals prospect come up and mash with the best of them? Nolan Gorman and his power got a ton of hype, so why isn’t Walker getting nearly the recognition? He’s arguably got more pop than Gorman and has a better hit tool to start. Walker was taken in the first round of the 2020 draft, out of high school, and has already made Double-A Springfield. That should tell you something. In 41 games at Double-A this year, he’s posted a .314/.420/.500 slash line with four homers, 11 steals, 36 runs, and 22 RBI. Now, let's caution ourselves that at 6-foot-5 and 220 pounds, the steals won’t stay that plentiful. Plus, he’s also struck out 131 times in 123 minor league games. That tends to happen with big-time power hitters, though. The other issue that might arise is exactly where Walker will play when called up. He’s been doing nicely at the hot corner so far in the minors, but with Nolan Arenado at third for St. Louis, that’s clearly not an option. Nor is first base likely with Paul Goldschmidt there. We might be looking at a DH for St. Louis to get a huge power bat in the lineup who should hit .270, if not .280, in the majors at least.

Boston took a shot on drafting Yorke in the first round of the 2020 draft at 17th overall. He’s done nothing to prove the Red Sox wrong for doing so. Elite bat-to-ball skills and burgeoning power led Yorke to a breakout campaign in his first full pro season last year. Through 131 pro games (34 at High-A), Yorke is slashing .303/.387/.472 with 18 homers, 18 steals, 101 runs scord, and 80 RBI. With a 65-grade hit tool in his pocket, he’s simply been able to focus on turning on balls better and getting his power into his game more. While he was drafted as a second baseman and has been playing there in the minors, he could see a move to left field – given his profile and the block in the middle infield in Boston. Just like being a surprise first-round pick, Yorke has continued to fly under the radar as a near top-20 prospect who could be up in the second half of 2023.

The Giants' farm system, as a whole, is typically overlooked. Generally, only one or two guys in their system get talked about. Right now, it seems that’s reserved for Heliot Ramos and Marco Luciano. However, Luis Matos should be being talked about in the same breath. Kyle Harrison, as well, but we'll get to him later. Matos, the 20-year-old outfielder, has five tools that are at least above-average and the hit and run tools both flash plus upside. Signed in 2018, he’s now been playing stateside since 2020 and has 188 games under his belt with a .316/.376/.488 with 22 homers, 157 runs, 137 RBI, and 44 steals. Matos profiles as a .300 hitter with 17-22 homers and 25-28 steals per season. If he’s still available in your dynasty or keeper leagues, he should be snatched up as quickly as possible as he’s about to hit the upper minors at Double-A later this year and will become more known.

In Spring Training, there was chatter from Marlins’ execs, scouts, and beat writers that Eury Perez might be the best pitching prospect in their system. Given his rank and production, that fits. Even though Perez has been in the system since 2019, he’s still just 19 years old and already at Double-A. Possessing a three-pitch mix of a fastball, changeup, and a curveball, the lanky teen (6-foot-8, 220 pounds) has been able to use that mix to strike out hitters who have often been older than him. So far, in 112 pro innings, Perez has posted a combined 2.49 ERA and 158:35 K:BB ratio with a .169 BAA. He’s been able to add velocity and stuff since he was signed and, with about 20 pounds left to put on his frame, there’s likely more velocity still coming. It’s unusual to see such a lanky pitcher be able to control his stuff the way Perez does, but that’s why he’s gotten so much hype as potentially the best arm in the Marlins’ system. In 2024, he should be no worse than a No. 2 starter with high-strikeout upside.

Drafted in the 2020 draft, out of the prep ranks, Harrison been moving quickly through the Giants’ system to this point. Already up to Double-A Richmond this year, Harrison has an intriguing mix of pitches that make him a potential No. 2 starter with a floor of a high-strikeout No. 3 starter. The fastball has already picked up velocity since joining the pro ranks and it now sits in the mid-90s. The slider sits in the mid-80s with a lot of bite to it. Both are plus pitches. His third pitch is still coming along, a changeup, and it grades as average at the moment. All three offerings get nice run and movement from his three-quarters arm slot. The downside right now for Harrison, though, is that the control isn’t there yet. Through 133.1 innings pitched since being drafted, he’s tallied 63 walks – which equals a 4.25 BB/9. Given what the Giants have been able to do in developing pitching, Harrison looks like a very good fantasy arm starting late in 2023.

Mayo has remarkable pop. So much so that he’s got arguably the rawest power in the Orioles' system. That, and his double-plus arm, are his best traits. The bat is risky, though, as is the speed. However, there is hope that the bat can get a little better and allow him to consistently get to the raw power in game situations against top-level pitching. So far, through the low minors, he’s been good with a .277/.370/.522 slash line in 93 games and 19 homers, 77 runs, 74 RBI, and 16 steals. Mayo’s size likely means the steals trail off as he moves up and it also could mean that he moves to left field or first base. Either way, though, there’s a shot at a .260 hitter with 35-homer pop here for a 2024 debut.