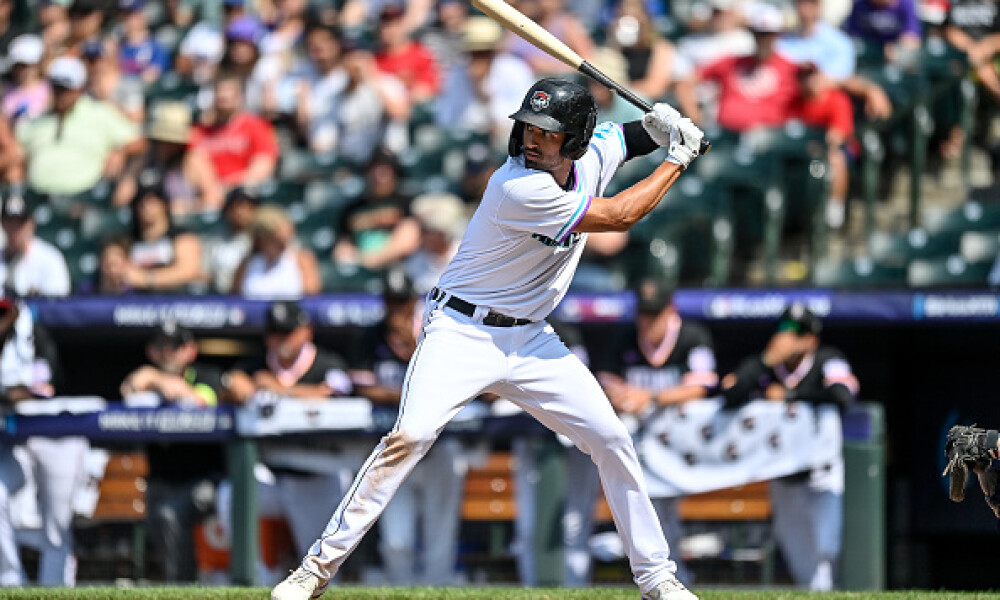 There’s been a whole lot of stuff happening in the 2022 MLB season. That includes prospects coming up and fantasy baseball rookies taking over. That means, we have to update the Top 300 Fantasy Baseball Prospects list. One of those moves was Detroit Tigers outfielder Riley Greene jumping to the No. 1 spot in the fantasy baseball prospect rankings. Graduations to the big leagues, injuries, hot starts, and cold play all account for shifts in these rankings. In this article, we'll break down the biggest risers and fallers in the MLB prospect ranks as you look for help on the fantasy baseball waiver wire. Some of these future MLB rookies could help your fantasy baseball lineups out if you have players on the current MLB injury report.

The key to ranking these prospects is taking into account their fantasy upsides and not just how they are at playing baseball. Playing baseball well is obviously key. But you can be a solid ballplayer and have no fantasy value, like David Fletcher. This set of rankings is more focused on players that have all-around value or have maximized a certain skill set. If you go looking on Baseball America or MLB Pipeline, the order of prospects might be different as they are taking into account how solid a player is for reality instead of just fantasy baseball.

For those that don’t know, a prospect loses their prospect status after 130 at-bats or 50 innings pitched in the majors, or (a lesser-known rule), 40 days on the active roster not in September.

In this article, we’ll talk about the biggest risers and biggest fallers among MLB prospects since the last set of rankings and which teams have the best systems in the league currently. You can see the full list of Top-300 Fantasy Baseball Prospects here.

A late bloomer. That’s the best way to describe Vinnie Pasquantino at this point starting as a junior in college at Old Dominion. Since that season, he’s been a remarkably consistent hitter with a high average and a very good power stroke. He has one of the prettiest swings in the minors and an approach that’s just as good, having produced a .298/.388/.585 slash line in 215 minor league games, 42 of which have come at Triple-A Omaha. In addition to the good slash line, he’s hit 50 homers in that span while walking 115 times. He’s shown enough at every level to be up very soon with Kansas City as they have a hole to fill at either 1B or DH. Don’t be surprised if he’s a top-five fantasy first baseman as soon as next year.

The former Cincinnati Bearcat has had a very quick turnaround since being drafted by Milwaukee. They took him in the fourth round of the 2020 draft and now it’s looking like a steal of a pick. Over 148 minor league games, 39 coming this year at Double-A, he’s slashing .298/.394/.570 with 38 homers and 40 steals with over 100 runs and RBI's. The average should drop a bit as he continues into the upper minors but the power and speed are real. He is a bit of a free-swinger in his approach which might mean we see more whiffs and fewer walks as he faces more advanced pitching, but getting a guy that can hit .270 with 30 homers and 25 steal upside right now is a must in your dynasty leagues.

We’ve seen pitchers for Boston get a bunch of hype throughout the minors before fizzing out. That doesn’t seem to be the case with Brayan Bello though. He’s been more of a slow burn than the others and has learned his craft at every step of the way. Signed in 2017, he’s worked his way up through the system to now be the top pitching prospect in the Red Sox system with three plus pitches. The fastball now sits in the upper-90s, though with little movement, and the mid-80s changeup uses the same arm slot and arm speed to generate good depth and fade. The Slider is perhaps the least consistent of his pitches but it’s still plus enough to count it as a plus pitch. Bello has posted a 1.97 ERA and 0.90 WHIP in 45.2 innings in eight starts across two levels with a 62:16 K: BB ratio. Bello should find his way to at least the number three spot in the Red Sox order perhaps starting in August of this year.

It’s been a while since there’s been a clear-cut top pitching prospect for the Astros aside from Forrest Whitley. That’s just what Hunter Brown is right now. The 2019 fifth-rounder has three plus pitches in his arsenal and a fourth pitch that hovers around average. Just like with all pitchers in this day and age, he’s got the mid-to-upper-90s velo and nice bite on the fastball. He then utilizes two different breaking pitches — a power curve and a slider with a lot of horizontal run — before rounding things out with a changeup. The biggest jump for him came from improving his control and a repeatable delivery that’s made the stuff even better. Over 33.1 innings at Triple-A this year, Brown has a 2.43 ERA with a 46:17 K: BB ratio and just one homer allowed. Houston needs some depth in the rotation and a few more good starts from Brown at Sugar Land should see him down the road in Houston.

Who? Exactly. I like to get you the jump on guys before they become known so you can reap the benefits. I did that with Andry Lara last year and Daniel Espino over the last two years. Now it’s Deyvison De Los Santos’ turn. The 18-year-old third base prospect for Arizona has a ton of raw power. The most in their system perhaps which is saying something given who’s at the top of their prospect rankings. The bat is at least average right now, with a shot to improve if his approach improves, but the power is the calling card. De Los Santos has enough athleticism to stick at the hot corner, which Arizona needs help with, and the bat certainly profiles there. Ultimately, De Los Santos profiles as a .270-.280 hitter with 30-35 homer upside and a handful of steals while hitting in the middle of the order. Think of him as a Kris Bryant type, with a tad less speed.

The Red Sox took Blaze Jordan in the third round of the 2020 MLB draft and since then, while his approach was better than expected, it’s still leaving much to be desired. There’s more swing-and-miss in his game than there should be against same-aged competition and he’s too pull happy at times. The power has been there, as expected with a 60-grade power tool, but the rest of the game still isn’t average. With a biggish frame — 6’2” and 220 lbs. — and a lack of speed and footwork, third base might not be his final defensive spot. He draws comps to Mark Trumbo right now and that’s not that exciting for fantasy value given we don’t need another .240 hitter with 25 homer pop and a lack of a defensive home.

Teams draft players off of what their scouts think they can get out of that player. That’s what the Reds did with Rece Hinds. They took him out of the prep ranks of IMG Academy and signed him over-slot to keep him from an LSU commitment but since then, it’s been a battle to see what he’s capable of. The batting average has been middling, though with a 45-grade hit tool that’s to be expected. The power has been there — 17 homers in 88 games — but that’s his main threat at the dish. If he can’t keep the average up, nor keep his health from getting in the way, there’s not much left to his profile other than power, which everyone has nowadays.

Injuries are a part of the game. Sure. But for Heston Kjerstad, it’s a little more serious than an injury. Drafted number two in the 2020 MLB draft, he’s yet to play a game or do much of anything for the Orioles since. He’s coming back from myocarditis, an inflammation of the heart, that’s kept him from playing for two years. The bat is still tantalizing as a middle-of-the-order bat and a corner outfielder who’s still just 22 years old. But until he can shake the aftereffects of the myocarditis, he has to keep dropping in the ranks.

It’s quite simple for Jeter Downs, he’s not hitting, and he hasn’t been. He’s been at Triple-A Worcester for a while now, dating back to last year, and the numbers aren’t good. In 135 games at Triple-A, Downs has posted a .196/.287/.356 triple slash with 182 strikeouts in 489 at-bats. Sure, he’s posted 21 homers and 25 steals. But that doesn’t make up for the huge K-rate and the terrible slash line. Let’s also not forget that he’s now blocked by Xander Bogaerts and Trevor Story, and even Kiké Hernández on the major league squad. It’s looking down for Downs — excuse the pun but I couldn’t help myself.

The rankings are determined by giving the prospects a point value (300 pts for #1 to 1 point for #300). The points are then added up with the team with the most rankings first.