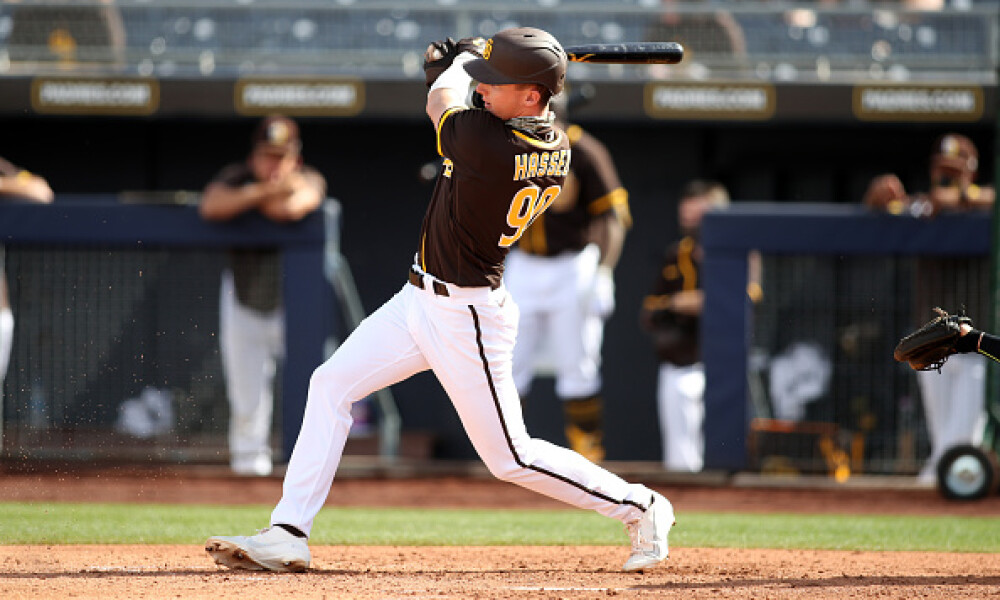 Juan Soto. Once thought to be an indispensable part of the Washington Nationals’ future and present plans might now be on his way out of town. He’s the name everyone has been talking about for two weeks now, ever since a leak of him turning down a $440 million offer from the team. It’s quite clear that he’s easily the biggest name that’s been known to be available at the MLB trade deadline in years and perhaps ever. That’s not meant as hyperbole either. A 23-year-old who’s an MVP-caliber player every year who is controllable for two more years and perhaps as many as 15 depending on a long-term deal. There’s not been anything like him on the trade block in a very long time.

So with him being available, according to the Nationals, let’s look at some of the prospect packages it might take to get his services for at least three pennant runs. Given the leaked package Washington is looking for is a team’s top-four prospects, at least one major leaguer, and perhaps taking Patrick Corbin as well, it might only be a select group of teams capable of being involved in the talks. We’ll break them down by frontrunners, contenders, and dark horses.

We all know the Padres and Nationals have made big trades before including the one that got Washington last year’s trade deadline piece Trea Turner. We also know that AJ Preller hasn’t met a deal he doesn’t want to make. While San Diego has dealt a ton of prospects in the past few years, they still have some intriguing guys like Robert Hassell III, Luis Campusano, James Wood, and Jackson Merrill at the top of their system. That combo of talent plus a major leaguer like CJ Abrams or MacKenzie Gore would be enough to get Soto. Hassell is a legit five-tool outfielder who is manhandling High-A Fort Wayne currently. Campusano is a hit-first catcher with solid defense and nearly a full year at Triple-A under his belt. He’s hit .297 with 22 homers in 141 games at El Paso with a 55-grade hit tool and power-tool. James Wood is a young, interesting outfield prospect who still needs to refine  parts of his game. The speed and power are intriguing but he needs to refine his approach at the plate to maximize those skills. Jackson Merrill was drafted last year and is still in Rookie ball but the tools are there for him to be a solid contributor in the middle of the defense.

The Rangers spent a ton of money on offense this offseason yet it hasn’t helped. So what’s one more bat to help the starting nine? They moved from dark horse to the frontrunner category because of who they possess down on the farm. Reports are out that suggest that Jack Leiter would be included in a deal, that’s a great start but who else? It would likely be Josh Jung, Ezequiel Duran, Owen White, and probably Justin Foscue as well. Leiter is well-established as a future ace caliber pitcher, not much more to add. Josh Jung should’ve been the starting third baseman for Texas this year prior to his injury and he’s a middle-of-the-order masher when healthy. Duran, a versatile infielder, has really taken steps this year making it to the majors for the last 23 games. Owen White is, in my book, a tad better of a prospect than Cole Winn at this point. He has a four-pitch mix with three of them being above-average or plus and gives him the floor of being a solid number-two starter. The last piece, at least for prospects, I believe would be Justin Foscue who is now position-blocked by Corey Seager and Marcus Semien. His skill set reminds me a lot of former Mets and Nationals second baseman Daniel Murphy. He’s got an average hit tool but is an on-base machine with solid power who will steal perhaps 5-7 bags a year.

Can you image a 3-4-5 combo that includes Soto, Paul Goldschmidt, and Nolan Arenado? It’s quite feasible given the depth of the Cardinals’ farm system. The package would almost assuredly start with third baseman Jordan Walker and then move onto either Matthew Liberatore, Gordon Graceffo, or Michael McGreevy, then go with Massyn Winn, and perhaps Joshua Baez if Washington doesn’t double up on pitchers to go with Tyler O’Neil. Walker is nearing a top-10 prospect status at third who’s hitting .309 with 22 homers and 29 steals in 159 games in Class-A and Double-A. Liberatore is a known pitching prospect at this point who should be a number-two starter in the majors while that’s also what Graceffo profiles as, just a tick behind Liberatore in development, and McGreevy is perhaps best suited for a mid-rotation spot. Massyn Winn lit things up in the Future’s Game when he uncorked a throw from short at more than 100 mph. Strong arm aside, he’s more of your prototypical shortstop on offense with an okay batting average and below-average power but plus speed. The last prospect mentioned is Joshua Baez who has double-plus power, elite arm strength and below-average hit tools. He’s the rawest of the prospects in this theoretical package but still has intriguing tools nonetheless.

The fit for the Yankees might be the best among the teams listed here. Soto is a young, left-handed hitting, outfielder who gets them away from having to pay Aaron Judge this offseason. They also may have the most intriguing prospect lineup to offer. New York may not have to give up Anthony Volpe either to make a deal. A package of Oswald Peraza, Jasson Dominguez, Austin Wells, Ken Waldichuk, and a major leaguer like Gleyber Torres probably gets it done. Volpe gets all the hype, as well he should, but Peraza and Dominguez come with their own copious amounts of plus-tools and room to grow. Each have four-plus tools and one average one and profile as all-stars for quite a while. Wells was a first rounder of the Yankees in 2020 and is a hit-first catcher who will move to either first or left field with above-average hit and power tools. Waldichuk is the top pitching prospect for the Yankees and fits as a mid-rotation, high-strikeout lefty who could be pitching in the majors right now. If they don’t want to give up Torres, they could throw Trey Sweeney in the deal who is position blocked at short in New York but profiles as a .300 hitter with 20-25 homer power at third base, much like an Anthony Rendon in D.C. The only reason they’re in the contender category is because of the trade they already made to get Andrew Benintendi from Kansas City.

The Dodgers are always in the mix for big names. That’s just how they roll at this point. Los Angeles just made a blockbuster deal with the Nationals at this time last year to get Max Scherzer and Trea Turner for a few prospects. They still have a bunch of prospects to deal and the money can be printed in the basement of Dodger Stadium so that’s clearly not a concern. A package of Diego Cartaya, Bobby Miller, Michael Busch, and either Andy Pages or Miguel Vargas and Clayton Beeter could be dealt. Cartaya is the top catcher in baseball and would make a lethal combo behind the dish paired with his former system-mate, Keibert Ruiz. Miller has a four-pitch mix made of a 70-grade fastball, 60-grade slider, 60-grade changeup, and 55-grade curveball. Everything is there for him to become an ace-caliber starter. Beeter is decently far down the Dodgers’ system rankings but he still has the stuff to be a quality mid-rotation starter with high strikeout upside. The tricky part is figuring out if Andy Pages, a five-tool outfielder, or Miguel Vargas, a fast-rising tools infielder would be included. Both guys can contribute on both sides of game while Pages is more likely to full realize his ability compared to Vargas. Busch is an Anthony Rizzo type first baseman prospect.

We’re dealing with Jerry DiPotto here which means he’s always up for a trade. He’s made a ton of them in his Mariners’ tenure. While the Mariners don’t necessarily have the deepest system, they do have some big name prospects that could make a splash and get Washington to listen. Noelvi Marte, Harry Ford, and Emerson Hancock would have to start the talks while you could include Jarred Kelenic and perhaps Ty France and/or Kyle Lewis in the deal as well. That might be a little lighter on the prospects in volume but they the number two shortstop and five catcher respectively in prospect rankings. Hancock is a solid mid-rotation starter with upside. Kelenic needs a fresh start now given how he’s performed in Seattle as does Kyle Lewis with the injuries. Ty France is having a heck of a run and could fill a hole at first for the Nationals assuming Josh Bell is traded or not re-signed. Whether Seattle has the funds to sign Soto long-term is a question which might reduce the package for him if they’re only getting 2.5 years of him.

Yes, the team the Nationals beat for the 2019 World Series is in the mix. Firstly, they have the prospects to be able to make a deal happen, though might have to include an extra major leaguer as well. Secondly, the Astros and Nationals share a spring training complex and so the regimes are more familiar with the players that could be involved than most. Houston would have to give up Hunter Brown, Pedro Leon, Korey Lee, and Colin Barber for starters and then perhaps their first round pick this year in Drew Gilbert. Brown is an ace in the making while Lee has a ton of pop as Brown’s battery mate. Colin Barber, Pedro Leon, and Drew Gilbert are all interesting outfield prospects in their own right with Barber being the most well-rounded, Leon with the most pop but not much hit tool, and Gilbert being a spark plug type guy with good bat-to-ball skills and nice speed. If they’re keeping one or two of those guys you could see either Cristian Javier or Luis García moved.