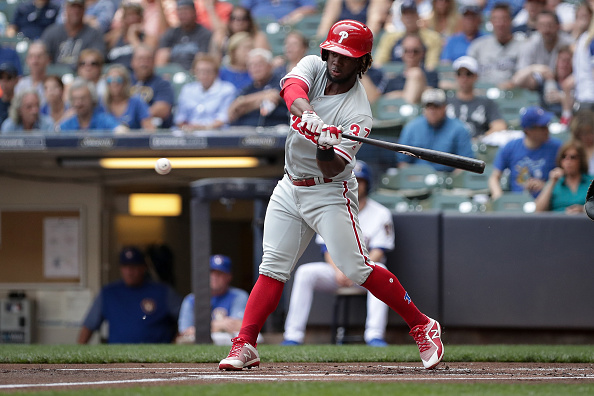 The MLB record for consecutive games with a home run currently stands at eight and is held by three different names from the past; Dale Long, Don Mattingly, and Ken Griffey Jr. On Friday night, Odubel Herrera drove one out of the yard in his fifth straight game and for the sixth time over the Phillies last seven contests. Overall during this stretch, Herrera has gone an incredibly impressive 15-for-31 with eight extra-base hits, nine RBI and 11 runs scored. The Phillies will contend with Erick Fedde in the nation’s capital on Saturday afternoon. Herrera has never faced the young right-hander.

J.D. Martínez put up a monstrous performance in Friday night’s 24-run slugfest against the Mariners. The veteran slugger led the Red Sox to victory, going 4-for-5 with a homer, two doubles, and five RBI. Martinez is the first player in the majors to reach 60 RBI this season and is tied with Mike Trout atop the home-run leaderboard with 23.

Where would the Brewers be without Jesus Aguilar this season? The Crew came up with just three hits in Friday’s 2-1 win over the Cardinals, two of which were Aguilar homers. He broke up rookie Jack Flaherty ’s no-hit bid with a game-tying shot in the seventh inning before walking it off with his 16th roundtripper of the season in the bottom of the ninth off of Bud Norris .

After laboring to a 6.46 ERA while allowing at least five earned runs in three of his previous four outings, Patrick Corbin entered Friday’s start at Pittsburgh in need of a rebound. Suffice it to say, he came up with one. The Arizona southpaw worked 7.0 shutout frames, surrendering just three hits and no walks while racking up 12 punchouts.

Clayton Kershaw missed all but the first and last day of May as well as all of June so far due to a lingering back issue. However, the future Cooperstown resident is ready to return to the mound for the Dodgers in New York against the Mets. Kershaw will certainly be monitored closely by his coaches and training staff, but a matchup opposite Jacob deGrom should be a real treat for fans that enjoy pitching duels.

Another staff “ace” that will return to the bump Saturday is Marcus Stroman . Before a shoulder issue sent him to the DL back in early-May, the Toronto righty had not been anywhere close to top form, struggling to a 7.71 ERA and 1.71 WHIP across his first 37.1 innings of the campaign. Stroman and the Blue Jays are on the road visiting the Angels.