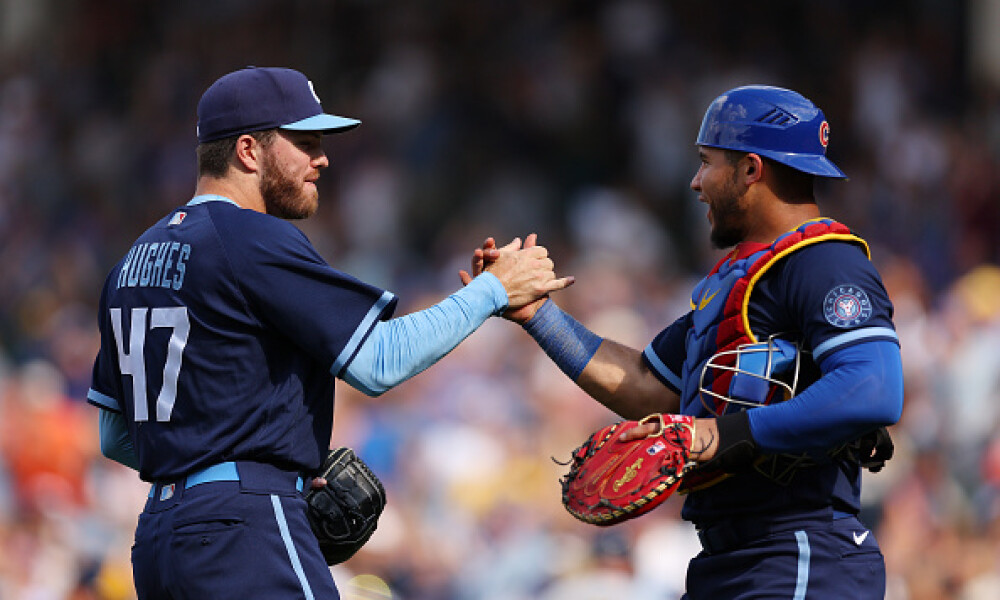 Austin Pruitt picked up his first save of the season and was the A’s closer for the day on Sunday. However, if you tried looking up his name on your fantasy baseball league’s waiver wire on Monday you wouldn’t find it. Unfortunately, he had already been designated for assignment. Pruitt’s situation demonstrates the volatility surrounding life as a big-league reliever. It’s been a typically busy week for those of us monitoring MLB bullpen usage. Baseball’s co-leader in saves has been given a break from closing games, the Yankees are now using a mix and match approach to managing their bullpen, and a former outfielder had the most saves in baseball last week. We’ll provide you with all the details and as we often do in this column, we’ll identify a couple of under the radar relievers who can sometimes provide better weekly fantasy production than some ordinary starting pitchers. Don’t forget to utilize our Closer Grid throughout the week. It’s a great resource for identifying bullpen closers, handcuffs, and sleepers.

(The statistics quoted in this article are accurate as of the morning of 8.23.2022)

Hughes, a former college and minor league outfielder, picked up the first three saves of his big-league career this week. Rowan Wick converted four of the Cubs’ first five saves since the MLB Trade Deadline (Mark Leiter Jr. recorded the other). However, even though Wick appeared rested and available to pitch on August 19th he’s been faltering of late and Cubs manager David Ross summoned Hughes from the bullpen. The rookie responded by recording his second straight save. Hughes picked up his third save on Tuesday against the Cardinals. With Wick giving up at least one run in three of his last four appearances (10.80 ERA) it appears that the Cubs will continue to turn to Hughes in late inning high leverage situations.

Seven other relievers had two saves each last week. Kenley Jansen (29 saves on the season), Liam Hendriks (28), Ryan Pressly (25) and Gregory Soto (23) are a few of the names that you’ll recognize from among that group but, there were a couple of others including:

As we’ve mentioned in the past, the Rays commonly use a closer by committee approach in managing their bullpen. Ten Rays relievers have at least one save on the season and six have at least three. However, since making his season debut on July 17th Fairbanks has four saves and five holds and Jason Adam also has four saves and five holds during that same time span. With only two other Rays relievers recording saves since July 17th, if you’re desperately looking for help in that category, Adams and Fairbanks seem to be the Rays relievers to roster. For what it’s worth, Fairbanks also held two games this past week.

Finnegan has a firm grip on the Nationals’ closers job and even though they’re a win challenged franchise, he’s recorded six saves in 12 appearances over the past month. Finnegan has an impressive 1.29 ERA and .140 BAA during that time span.

Raley’s three holds last week gives him 20 on the season. That’s the fifth most in baseball. Raley has a 1.13 ERA in his last 17 games (16 IP) and two saves and nine holds during that stretch.

Poche is another multi-faceted Rays reliever. He has a 3.00 ERA, seven saves and 16 holds on the season.

Boxberger has the second most holds in baseball (23). He’s also been on a roll of late, pitching 9.1 consecutive scoreless innings across his last 12 appearances. Boxberger also has 82 career saves.

Bush has two saves and three holds (recorded last week) since being traded to the Brewers.

MLB Bullpens To Take Note Of

Josh Hader, who entered Tuesday’s action tied for the major league lead in saves (29) is temporarily taking “a little break” from closing out games. Hader has blown two saves and pitched to an 18.78 ERA in his last 11 games. Unfortunately, the Padres are using a closer by committee approach in managing their bullpen and Luis García, Nick Martinez, Robert Suarez and Adrian Morejon are all part of that committee. Garcia and Martinez each have a save over the past week but with their expected usage being so sporadic they probably shouldn’t be rostered in fantasy. Hold onto Hader if you can, and if you’re lucky he’ll figure things out just in time for your fantasy league’s playoffs.

With Clay Holmes and Scott Effross both hitting the IL this week the Yankees were hoping that Aroldis Chapman, who had been pitching better, would reclaim his role as the team’s closer. Unfortunately, Chapman gave up two hits, four walks and three earned runs in his last two appearances (1 IP). The Yanks still have plenty of talented relievers. Wandy Peralta saved the Yanks’ Tuesday night victory, and Jonathan Loáisiga picked up a save on Monday night, but manager Aaron Boone confirmed that they will be using a mix and match approach in managing their bullpen for the near future. Additional help could be on the way. Zack Britton, who is recovering from Tommy John surgery, is beginning a minor league rehab assignment and could rejoin the team in September.

Keep an eye on Ryan Pressly who was unavailable on Tuesday night due to a stiff neck. It’s an issue that has been bothering Pressly on and off for the past couple of weeks. Should Pressly be forced to the IL look for Rafael Montero, Héctor Neris and even Bryan Abreu (who picked up a one out save on Tuesday night) to be used in late inning high leverage situations.

With starting pitchers averaging 5.2 innings per start so far this season, in some instances you might get similar, or even better production by using a top middle relief pitcher instead of a mediocre starting pitcher in a given week. The following are examples of two middle relievers who often make multi-inning relief appearances and might have deep league fantasy value based on their recent performance.

Ramirez pitched five scoreless innings across four appearances last week. He recorded a win, struck out eight batters and walked just one. Ramirez has a 3-0 win/loss record, two holds and a 0.81 ERA in his last 15 appearances dating back to July 17th.

Adam appeared in four games last week, pitching 4.1 scoreless innings. He struck out eight batters and issued just one walk. Adam hasn’t given up a run in his last 13 appearances spanning 13.1 IP. He struck out 17 batters and walked just three batters during that time frame.