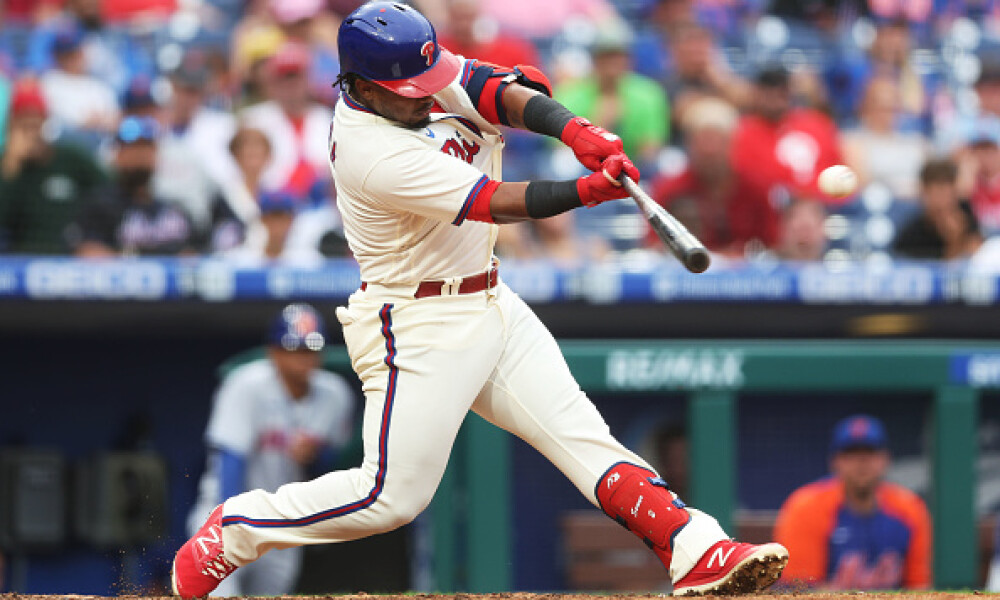 When looking at the free agent second baseman this MLB offseason, I desperately wanted to include Trea Turner in this list, because without Turner, one of the premiere free agents, the second base position is incredibly thin. Many of the players below project to be super-utility guys for most MLB teams, but stranger things have happened to say the least. The second base position is one of the more shallow spots in 2023 MLB free agency, but that’s not to say that some of these guys couldn’t provide a little bit of fantasy value throughout the 2023 fantasy baseball season. Outside of maybe Jean Segura, none of these second baseman should be considered amongst the best MLB free agents available, but some of the guys below would be smart investments for teams looking to add some depth pieces, and with the likes of Brandon Drury and Adam Frazier, some positional versatility as well. In the latest installment in our top MLB free agent rankings series, we’ll highlight the second base position, and the names that fantasy baseball managers will want to keep a close eye on heading into the 2023 fantasy baseball season.

Outside of playing in just 98 games due to injury this past season, it was much of the same for Segura in terms of his offensive numbers. He’s got a little pop in his bat, can still scoot around the base paths, and provide league-average defense at the keystone position. Before missing the summer months, Segura had 10 XBH through the first 44 games of the season, before registering just nine over the final 54 games. The second baseman market in free agency is rather thin, but contending teams should love Segura’s ability to make a ton of contact (85.1% for his career), get on base (.344 OBP since start of 2020), and not have to sacrifice too much defensively. If he can stay healthy, and tap into the power we saw through May, he could generate some 2023 fantasy buzz if he lands on a potent offense with a projected full time role.

For the majority of his career, Frazier was a solid source of batting average for MLB teams and fantasy baseball managers alike. However, he’s now hit below .240 in two of the past three seasons. His contact metrics have remained stable, and while he is leaving the zone a bit more in recent years, the overall numbers aren’t anything of which to be wary. The left-handed hitting utility man hasn’t hit lefties as well over the last three years as he did in the early parts of his career, so he may be looking at the strong side of a platoon with his new club. While he may not find a full time gig this free agency, a contending team would be wise to add Frazier to add depth to its team. Since getting called to the big leagues, Frazier has logged at least 25 innings at second base, third base, shortstop, and all three outfield spots.

Drury will likely parlay a career year into a little chunk of change for 2023 and beyond. His 28 home runs were incredible, considering that he hit just 33 home runs from 2017-2021. As expected, his barrel rate jumped to a career best 10.4 percent, and his 39.4 percent fly ball rate was the second-highest mark of his career. He enjoyed the friendly confines of Great American Ball Park for over half of the season, and Drury did have some regression after being traded to San Diego. Drury posted a .955 OPS against southpaws in 2022, and his versatility across the diamond, mainly at second and third, will make him an appealing free agent target for many teams. There will be some regression in store for 2023, but a good home park should help offset some of the regression he’s set to experience.

Harrison will turn 36-years-old in July and is a serviceable backup at this point in his career. He can play numerous positions across the diamond, doesn’t strikeout, and he has  a .332 OBP over the last three seasons. He won’t make a ton of hard contact, and his .233 xBA in 2022 was his lowest mark since 2018. At this point in his career, Harrison is best served as a depth middle infielder who can fill in in a pinch. However, the days of him being a full time starter are behind him, and if a team signs him to be an everyday player, expect him to be moved at the 2023 trade deadline.

Before cooling off down the stretch, Diaz had a nice run in July for the Astros, as he hit .311 with a .434 wOBA and 190 wRC+. Diaz’s role in the postseason was minimal, and his impact even less so, as he slashed .045/.087/.091 across 23 plate appearances. His Statcast metrics from this past year actually look okay, all things considered, and his chase rate and contact rate trended in the proper direction for the second straight year. While contending teams would like Diaz’s bat and versatility coming off the bench, I wouldn’t be surprised to see Diaz sign with a “lesser” team that will offer him the chance at a full time role at the inception of the season. In a full time role, Diaz offers some pop, and could flirt with a .250+ batting average and 20+ homers over the course of a full season. His numbers from 2021 and 2022 over a full 162 game season come out to a line of .250/.302/.404 with 18 home runs, 58 runs scored, and 76 RBI.

Don't forget to check out the MLB lineups page before locking in MLB daily fantasy lineups. Plus, use the MLB daily projections, our MLB DFS Optimizer, and the rest of our MLB DFS lineup tools before setting your lineups.