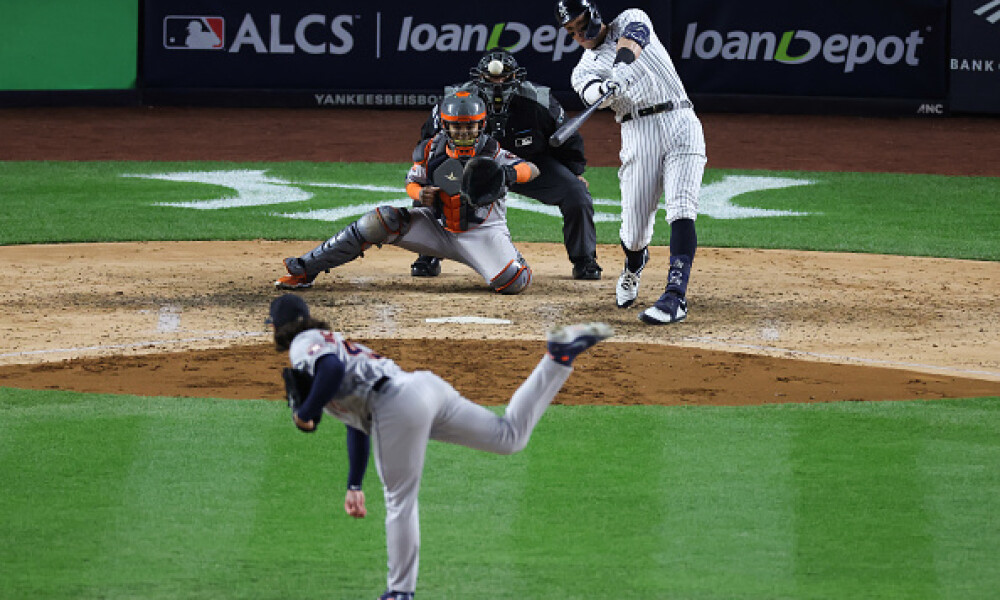 With Michael Harris and Julio Rodríguez winning the NL and AL Rookie of the Year awards respectively for stellar 2022 seasons, outfielders are in the news. They’ll be in the news a lot during MLB free agency too with a star-studded cast of free agents available on the open market for the 2023 season and beyond. Heck, the signing of Joc Pederson, who hit 23 homers in 2022 doesn’t even change the top-five outfielders below; that’s how deep the class is. Some of these top outfielders changed teams in the 2022 season and some are simply able to sign wherever they want to after finishing their time with the teams they started their careers with. Just where they’ll wind up is anyone’s guess at this point but we’ll take a look at how their free agency may impact their fantasy baseball values for 2023.

It might have been the greatest “screw you” season a player has ever had in any sport. The Yankees offered him a contract extension prior to the season but he didn’t agree to it and stated that he intended to test free agency. Then went out and produced the above stat line. A line that will likely win him the AL MVP along with setting a new AL single-season home run record and nearly winning the triple crown. Judge’s wOBA was an astonishing .458 while his wRC+ (weighted runs created +) was a remarkable 207, otherwise known as being 207% better than an average hitter in 2022. Now while he’s posted 50 or more homers twice in his career to this point and has consistently had good batting averages with the lowest mark being .272 in a full season, there’s still concerns. Firstly, he’s going into his age-31 season. Not great, especially for a tall hitter like Judge as players of his height tend to breakdown quicker as evidenced by Adam Wainwright (the pitcher) having the fifth-highest bWAR in MLB history for hitters 6’6” or taller after age-30. Secondly, he’s coming off an historic season and typically getting players after career years doesn’t bode well for real life or fantasy baseball teams. There’s also the real chance that he doesn’t go back to the Bronx and gets a slight downgrade for park factors going forward. One last note is to not expect that many steals again going forward. In the previous five seasons he’d swiped 24 combined bags.

It’s impressive what Nimmo can do when he can manage to stay healthy for a full year. We’ve always figured him for a run scored threat as well as a good average and some pop, he was just never on the field enough for it to come to fruition. That changed in 2022 as he topped 140 games played for just the second time in a full-season since coming up in mid-2016. The former first-round pick is the type of hitter who is an ideal two-hole hitter in a lineup as he’s got enough on-base prowess to be a threat while not having the base-stealing resume of a lead-off type guy. There are plenty of teams that could use an outfielder like that who excels defensively too. The only question marks for Nimmo is, can he reproduce his K-rate numbers going forward as the 17.2% mark was a career-best and again, the health. It was an interesting move for New York to not offer Nimmo a Qualifying Offer but perhaps they were concerned about paying him $19.26 million for the 2023 season. That’s telling though.

Benintendi got off to a hot start in Kansas City with a .320/.387/.398 slash line in the 93 games he played for the Royals prior to the July trade deadline. That made him a key target for the Yankees to sure up their outfield but unfortunately he simply couldn’t stay healthy in the Big Apple. Playing just 33 games down the stretch, it wasn’t a great run for the playoff-bound Yankees. In that stretch Benintendi hit just .254/.331/.404 with just two homers and 25 strikeouts. To put that into perspective, he hit three homers in the cavernous Kauffman stadium and struck out 52 times in 93 games which means he went from a 14.9% K-rate to a 21.9% mark in New York. He’s mainly known as a defensive whiz in left field who can get on base at a good clip but doesn’t have much in the way of pop or base stealing any more. While he’s only going into his age-28 season and he’s shown both 16+-homer pop in the past along with an ability to swipe bags, I doubt we see that come back at this point.

Can we talk about how post-post-post-hype Profar’s season was in 2022? A former number one overall prospect about a decade ago, Profar finally put everything together for his second good season of his MLB career. His 110 wRC+ mark in 2022 was a career-best, for a full season, while his .320 wOBA was the second-best mark. It’s true that the San Diego offense likely gave him a boost in scoring runs, but it was still tied for a career-best mark in that category as well. The advantage that Profar has in free agency right now, over other outfielder options, is that he can play multiple defensive positions. While he played exclusively in left field in 2022, he did play all three outfield spots, second, and first in 2021 also for San Diego. That kind of versatility can be valuable for teams when dealing injuries.

This is an interesting inclusion in the list. There are players like Michael Brantley who are available on the market and previously Joc Pederson along with Mitch Haniger, Tommy Pham, Wil Myers, and now Jason Heyward. However, none of them have the potential upside of a now healthy and rested Conforto. Prior to getting injured in 2021 while playing 125 games with 14 homers, 55 RBI, and 52 runs, he’d posted three-straight years of at least 27 homers between 2017-19 while posting BABIPs of at least .289 in that run. The batting average has been a bit all over the place throughout his career with a career average of .255, but the pop and run-production ability has been there consistently. He’s likely a guy you can get at a value ADP and if he comes back like his 2017 or 2018 or 2019 season, he’d be a steal at that rate. There are a few different teams that have shown interest in him including the Mets as a way to fill some impending holes defensively and offensively.

2022 Stats: Yoshida played in the NPB for the Orix Buffaloes in Osaka Japan

Just like in the Starting Pitcher Top-5 Free Agents, we’re going to get a bit of an international flavor going here with a bonus free agent. Yoshida is a 29-year-old left-handed hitting, right-handed throwing, outfielder who’s played seven seasons in the NPB — Nippon Professional Baseball. Now he’s getting his chance to come stateside to ply his craft in MLB. Over the course of those seven seasons, and 762 regular season games, Yoshida has tallied a .327/.421/.539 slash line with 133 homers, 467 RBI, 418 runs, and 21 steals. He’s hit at least 21 homers in four of the last five seasons, with the only one falling short being the 2020 season, which was still a full season in Japan. His average slash line belies how good he was in 2022 with a .336/.449/.559 which was his fifth-straight year with an OBP over .400. We’ve seen some resent NPB transplants have an adjustment period to MLB with the schedule and travel differences not to mention the speed and movement on pitches. Last year Seiya Suzuki came over and had an up-and-down season. Depending on where Yoshida signs, we could see him utilized anywhere from a leadoff hitter to a number-five hitter who can get on-base at a good clip. So far, the Yankees and Mariners have shown the most interest in him as both need left-handed outfielders and leadoff hitters.