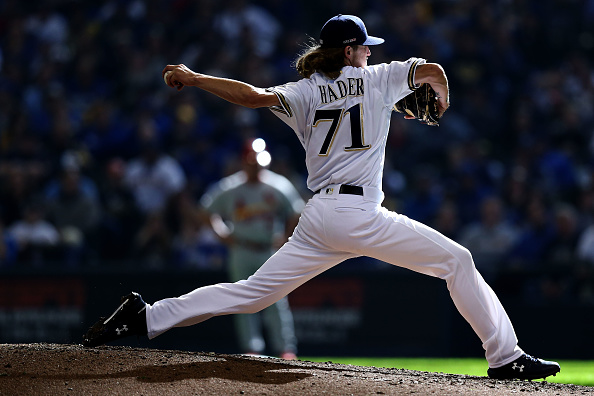 Baseball remains a copycat sport with teams imitating others paths to success. Since the Rays build up bullpen depth each year without overpaying a "closer” using fluidity in high leverage to maximize match-ups, competitors take note. Add in analytics favoring this approach and finding a reliable reliever for saves in fantasy requires one's attention along with a little luck. Volatility remains at the forefront of the saves category, so understanding when and where to target them gives a fantasy player an inherent edge in upcoming drafts.

However, it's not easy and it drives the price up on relievers projected in stable saves environments. This resonates whether one peruses the average draft positions (ADP) on Fantasy Pros or the National Fantasy Baseball Championship data. Four, yes only four, relievers enter 2021 as clear cut closers with strong ratios and the ability to generate strikeouts.

This represents the first tier of the position. A closer does not come off the board in the first two rounds. Instead, one may be reached for in the fourth or fifth round depending on league size then the dominos fall. It's not a deep position by any means and it may be the most frustrating category to target this season. Fantasy baseball is a marathon and you cannot win a marathon without putting a few band-aids on your nipples, so prepare now by maximizing with a plan in the draft room.

Tier One: The Four Horsemen

Year after year fantasy analysts scream from the mountain tops: DO NOT PAY FOR SAVES. Ignore them. It's time to pony up kids. It takes at least 80 saves in 12-team leagues to reach the 80th percentile in the category. Burning up precious FAAB (free agent acquisition budget) or waiver priority for the closer of the week gets old fast. Running to the waiver wire after a melt down. Instead, take one of the four above, if healthy, and breathe. In fact, take two and send your competitors into a frenzy trying to draft saves over value while you rack up hitters or starters to fill out your roster. When everyone zigs, you zag. If you take Chapman, target Zack Britton , his back-up, two rounds before his ADP to insure your investment.

Tier Two: Mostly Stable with a side of Hopeful 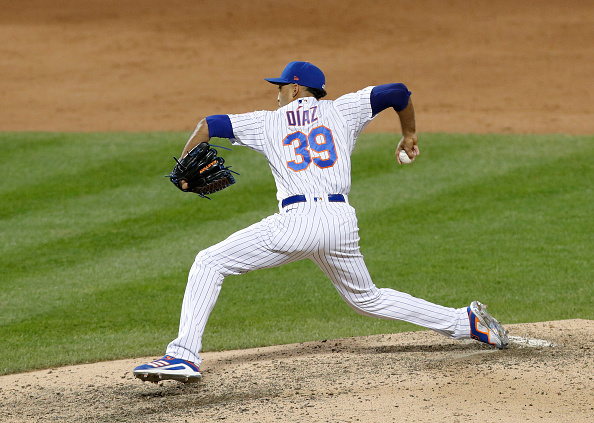 Why such a chasm in this tier in terms of ADP? Well, it gets murky after the first four. Díaz should be the primary closer for the Mets but his time in New York's been volatile to say the least. He turned things around in 2020 but his manager, Luis Rojas insists the high leverage could be fluid. Should Diaz save 30 games, yes. Will the Mets let him? Place your bets. If you believe, target with confidence but it's more risky than many believe it to be.

Hand should do well with the Nationals, especially if his velocity returns to past form. If he's hitting 93 MPH with his fastball by the end of spring training, giddy up. If not, draft Tanner Rainey . Pressly did very well in 2020 for the Astros yet they remain in the rumor mill hoping to add a closer. Yates hopes to rebuild his status in the marketplace reuniting with his former Triple-A manager, Charlie Montoyo. Toronto will be cautious not to overwork Yates but like others, if he's healthy in spring games, he could save 25 or more this year. Also roster his back-up, Jordan Romano as the handcuff.

Will the real Craig Kimbrel please stand up? It's been a tenuous run with the Cubs but he made mechanical adjustments late last year which could carry over. However, if Kimbrel starts out hot but his team fades, he's trade bait. Ride the bull as long as you can, but have a plan if he knocks you into the dirt. No one goes into a draft hoping to get Montero. Yet, if he pitches well and notches 20 saves for the Mariners, he's a nice second closer to pair with one of the four horsemen. Just remember he's an accessory, not a star. (Update 2/18) Rosenthal agreed to a one-year deal with Oakland for less money with assurance he'd be the primary closer. Diekman could siphon some save chances due to match-ups, but it appears Rosenthal can build on his bounce back from 2020 with the A's.

Here's what's so difficult about drafting for saves in 2021. With Karinchak (affectionately known as Special K by fans like myself). Cleveland will not anoint him the closer and two different beat writers suggest they prefer him as the stopper. Not sure what a stopper is? Think of Nick Anderson of Tampa Bay or how Cleveland used Andrew Miller while with the team. A stopper enters the game at the highest leverage point from the seventh inning on to raise the team's chances of winning, not pigeon-holed into the ninth inning. IF Special K opens the year as the closer, he's a top five talent at the position. IF not, he's a huge risk who can still provide value with strikeouts but it's a tightrope walk for the risk averse.

There's a saying in fantasy, it's better to be out of a guy a year too early than a year too late. This season, it's Jansen. He did not record the last and most important out in the franchise's first World Series win since 1988, Julio Urías did. Jansen may start the year as the closer, but someone else usurps him once again before it ends. Both Rosenthal and Melancon remain free agents as of this writing. Heed where they end up before paying full price for saves.

Remember when LeClerc felt like a slam dunk as the Rangers closer? Same here. If he's your third closer, fantastic. Value accordingly but he could finish the year as a top ten closer or back in middle relief. It feels dirty targeting Bard, Bass or Soria as a third closer, but it felt similar last year drafting Brandon Kintzler who secured 12, tying for fourth in the majors. Sign me up for a dirty Bass or dirty Soria if the price is right.

Excluding ADP in this tier and focusing on team battles for high leverage. Decide if hedging to one side on a team focusing on the majority share or who may win the role outright gets dicey. One can canvass (take both parties or two of the three potential outcomes) as well in leagues with deep benches or daily lineups. This tier requires one to pay close attention to usage patterns in spring, performance, velocity updates and reading the beat writers. If you're lazy, stay in the tiers above. In the team battles, a dark horse would be a bet for second half saves.

Now for the battle royales in spring training 2021. Ding Ding!

Handicapping these situations comes with trepidation. If healthy, Martin could be a stealthy play but the potential return of Melancon would harpoon him. Taking the long view in Baltimore betting on Scott getting the most saves of the few they procure. Avoiding Boston, Cincinnati, San Francisco and Tampa Bay due to the sheer volume of potential arms. I’m betting on Hicks in St. Louis and Pagán to get more saves than Pomeranz. Bradley in Philadelphia has appeal and it's always a volatile time in Tampa Bay for fantasy owners. Be safe out there kids.

This list represents relievers with upside in terms of being ratio erasers (protecting ERA and WHIP), getting a handful of saves or taking over if a trade happens or names to put on your watchlist during the season being ready to pounce if they get a chance to close:

Before wrapping up the reliever preview, some cliff notes for your final preparations. First, a chart displaying some indicators expanding sample sizes to all qualified relievers from the second half of 2019 through the end of last year. It includes swinging strike percentage (SwStr%), strikeouts minus walks (K-BB) percent and SIERA (an ERA predictive statistic): 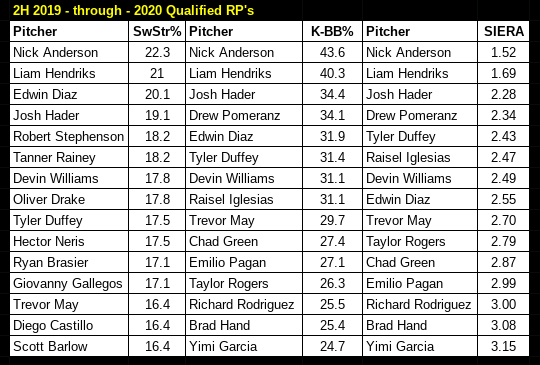 Focusing more on last year, and to include Special K, here's the same chart but with relievers only needing 30 innings to qualify: 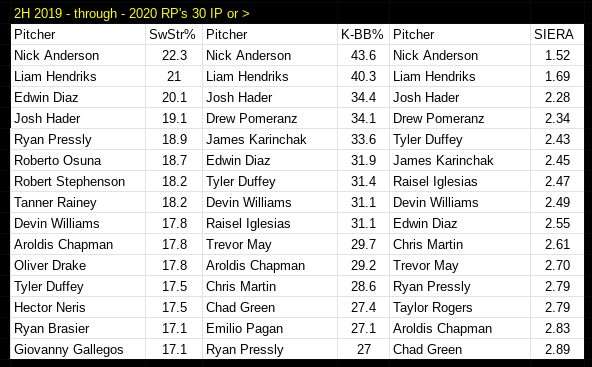 Last but not least, the leaders in saves and strikeouts in this time frame.

Be prepared at your draft when targeting saves to remain ahead of the competition for a scarce commodity. Average draft positions will continue to fluctuate based on roles getting defined, but know your marks and stay the course to avoid needing too many band-aids this fantasy season.