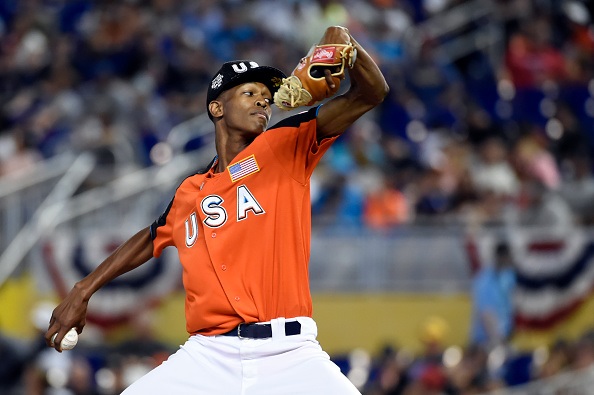 We are about halfway through the minor league season and it is a good time to focus on some of the unheralded prospects among the top-100 in baseball. I know a lot of people focus on the top-100 guys when doing their research, but even with people focusing on them, there are still a bunch of guys that fall through the cracks. This week’s piece will focus on the guys in the top-50 that you may not have heard about. 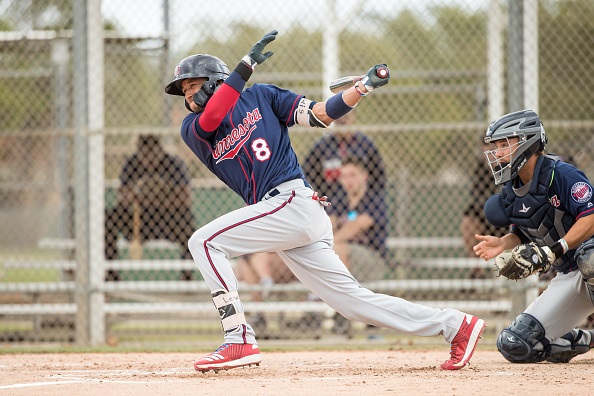 Royce Lewis (SS MIN) The Twins made Lewis the top pick in the 2017 draft last June and since then, he has shown why he rose to that level of selection. In his first year of pro ball, the 6’2” 188-lb. shortstop slashed .280/.381/.407 in 54 games (204 at bats) with four homers, 54 runs, 27 RBI, and 18 steals between two levels. Having just turned 19 years old three weeks ago, Lewis is in Single-A Cedar Rapids once again and his hitting .301/.349/.456 with seven home runs, 43 RBI, 41 runs, and 18 steals in 60 games. His 70-grade run tool is his best tool but the 60-grade Hit tool is close. The other three are average to just above-average which all profile as allowing him to stay at short, though a move to Center may also be in his future. Lewis has the profile of a future star up the middle and fits the mold of the current crop of shortstops in the majors, though Lewis is still about three years away from Minnesota, but is already ranked as the 13th-best prospect in baseball overall.

Jesus Luzardo (LHP OAK) When the Nationals made the trade last year to bolster the pen by acquiring Ryan Madson and Sean Doolittle from the A’s, Luzardo was the biggest piece going back to Oakland in the deal. Drafted in the third round of the 2016 draft, he was a first round talent who fell because of the Tommy John surgery he underwent a couple of months before the draft. He possesses a mid-90s sinking fastball that touches 98 and can be worked well to both sides of the plate, along with a plus changeup that misses bats very well. The third pitch in the arsenal is a curveball that he can add and subtract speed to when necessary and works as a slightly above-average offering. The southpaw has been at Double-A Midland most of this season and over 11 starts, 52.2 innings pitched, he has a 4-3 record with a 3.08 ERA (3.25 FIP, 3.30 xFIP), 1.12 WHIP, and 60 Ks. The ceiling for Luzardo is of a number two starter but his floor is a of a number three, so he’s pretty well locked into a top-half of the rotation role in a few years.

Triston McKenzie (RHP CLE) McKenzie might be the 23-ranked prospect in baseball, the #2 in the Indians system, but there isn’t a lot of buzz made about him simply because of the loaded major league rotation. The 6’5” 165-lb. right-hander has a nice mix of stuff and pitch ability and downward plane that help his pitches play up. A low-90s fastball is his best pitch while his high-spin rate diving curveball is a close second and a good fading changeup is his third-best pitch. Given his lack of weight to his lanky frame, there are still concerns about how he will hold up over the long-term, he’s already been on the seven-day DL this year for a forearm issue, but when he’s healthy his stuff can put him in the top-half of a rotation at the big league level. In the four starts at Double-A Akron (who have a great mascot in the Rubber Ducks) he’s got a 1-2 record with a 4.26 ERA (3.09 FIP) and a 19:5 K:BB ratio in 19 innings pitched. 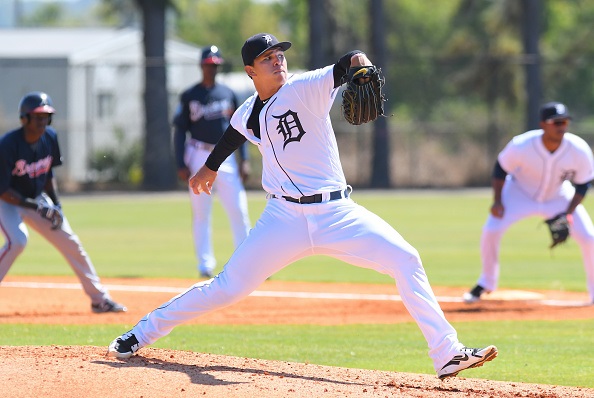 Franklin Perez (RHP DET) Remember when the Tigers traded Justin Verlander to the Astros in August of last year? Well Perez was the key prospect that came back in that trade, a then 19-year-old righty who had already reached Double-A in Houston’s system. Now 20, the 6’3” 197-lb. former third baseman, Perez sits 92-94 with his running fastball and can touch 95-96 an occasion while also working his curveball and slider (both future plus pitches) in the zone at any time. His changeup has nice feel and late fade that also stays in the zone. He has only made one appearance for the Tigers system because the trade happened too late in the season to get him on the hill and he is dealing with a lat strain to start the 2018 season which has kept him off the mound for all but two innings of the year. However, when healthy, he has a near 9.0 K/9 rate with a low three ERA and even a few saves throughout his pro career. Detroit believes he will be a future number-two starter and at just 20 years old, there’s plenty of time to reach that floor.

Michel Baez (RHP SD) Baez, 6’8” and 220 pounds, is a big righty who even at that size has flown at bit under the radar just because of who is ahead of him in the Padres system. Fernando Tatis Jr., Luis Urias, MacKenzie Gore, and Cal Quantrill are all ahead of him in the system and the overall rankings as Baez is the 35th-ranked prospect in the league. Signed out of Cuba in the 2016 international signing period, the imposing righty sits 98-99 with his fastball most of the time and works in a mid-80s slider that has nice two-plane break to it. Baez also works with a curve and changeup that are still developing but have the ability to be above-average offerings when fully fleshed out. So far in 10 starts at High-A Lake Elsinore, Baez has a 2-5 record with a 2.79 ERA (3.51 FIP), 1.24 WHIP, and a 9.12 K/9. The main thing holding him back at this point is his command and control. A 3.91 BB/9 isn’t great obviously and neither is the .282 BABIP against. If he can harness his stuff and develop it, a number three rotation spot is sitting there for the taking in San Diego. 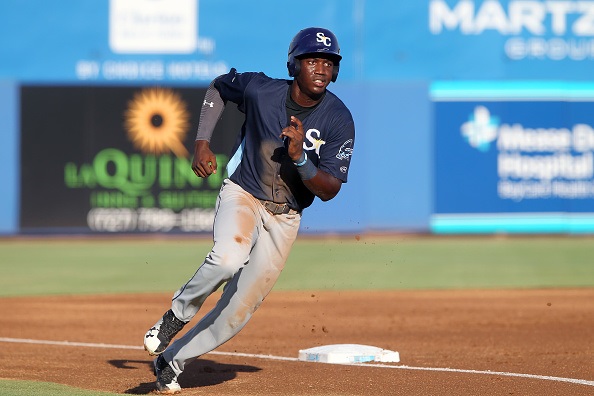 Jesus Sanchez (OF TB) The well-put-together 6’3”, 210-lb. outfielder was signed out of the Dominican Republic in 2014 at just 16 years of age. Now 20, he is progressing through the Rays farm system with his first full season happening last year at Class-A Bowling Green and now playing this year at High-A Port Charlotte. In 117 games at A-ball, Sanchez posted a .305/.348/.478 line with 15 homers, 82 RBI, 81 runs, seven steals and a 17.8% K%. This season, in 62 games, for the Stone Crabs a .316/.332/.500 slash line is present with nine home runs, 45 RBI, 38 runs, and three steals also with a 17.0% K-rate. The youngster has above-average tools across the board and flashes a plus hit-tool that allows for a higher average, though his 2.3% BB rate could improve this year. When he fully develops, Sanchez profiles as a middle-of-the-order bat that should hit for average and 25+ homers with 10-12 steals.

Jo Adell (OF LAA) I first highlighted Adell in the draft recap from last year when he has taken 10th overall by the Angels. When putting everyone in the draft class into perspective, Adell may have the best raw tools of anyone in that class and is the kind of athlete that can develop into a five-tool guy. For example, in 2018 he has played 56 games across two levels (A-ball and High-A Inland Empire) and has posted a line of .326/.379/.632 with 16 homers, 53 RBI, 48 runs, 11 steals, 15 doubles, and three triples. There is a downside here though. There is a swing-and-miss tendency in his approach that has so far kept his K-rate hovering at the 23.4% mark in his pro career over 470 plate appearances. In high school he consistently threw upper-90s fastballs on the mound which means his strong arm can stay in center but also profiles to right as well. He is still just 19 years old, and will be for all of this season so there is still a lot of projection left in his tools but when all is said and done, he is an all-star caliber middle-of-the-order bat to go alongside Mike Trout at the A.

Dylan Cease (RHP CWS) Drafted in the sixth round of the 2014 draft, Cease has been moved along slowly in his professional career after requiring Tommy John surgery following the draft. However, that being said, when he’s been on the mound, his stuff has been electric and proficient at missing bats. His fastball sits at 94-98 and touches 100 along with sink and run. He has a true power curve that when on, draws comps to Dwight Gooden’s remarkable curve. Cease has a changeup as well but it’s still below-average and needs work to become an average offering. The delivery isn’t consistent yet and there is still some cleaning up to do with it, but the stuff that comes from it can be frontline starter caliber in time. In 71.2 innings at High-A Winston-Salem, Cease posted a 2.89 ERA, 1.12 WHIP, 9-2 record, with 82 Ks and that got him a promotion to Double-A Birmingham recently. So while the stuff is there, the size (6’2” 190-lb.) and his health issues in the past have dimmed his light just a tad, though he’s still the 43rd ranked prospect in baseball. If everything comes together you’re looking at the next number two starter on the south side of Chicago.