Greg Jewett takes an upbeat look at the current state of baseball and the up-in-the-air timetable to start the season for 2020. 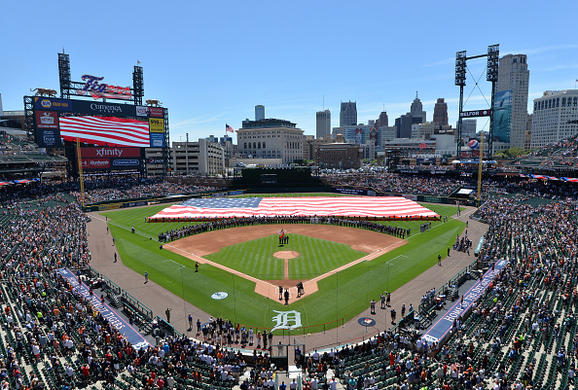 It’s tough to churn out fantasy baseball content in this time of flux. With no definite plan in place, speculation runs rampant. This creates havoc when trying to attach values to players. If baseball somehow creates a community in Arizona with potential games played in neutral park sites with the exception of the Diamondbacks, does this shift values of players? Absolutely. Can this plan go into effect? Well, this remains uncertain. Earlier this week, while sleeping through the pandemic, a Jeff Passan bomb hit on Twitter past midnight in the Eastern Standard time:

NEWS: Major League Baseball and the MLBPA are focusing on a plan backed by federal health officials that could have players in training camps by May and games soon thereafter.

Details at ESPN on how MLB may return -- and the difficulty in doing so: https://t.co/zDoNa3k4pm

Hope can be powerful, especially for someone as passionate about baseball as I consider myself. However, as a parent, this tweet from Brett Anderson resonates with me:

There’s sacrifice playing or coaching sports, and families seem to pay the highest price. As a former coach, losing time with my son for practices, travel to and from games along with missing his practices weigh on one’s conscience. Putting major league players in a virtual bubble in Arizona comes with perhaps too many potential sacrifices.

Add in the present uncertainty of a cure for Coronavirus and when it will peak, baseball needs to be fluid in its approach to a season. With revenues being tied to attendance, placing all the games in one state with no fans could be detrimental. But worse than no season at all? This remains my biggest struggle with future games. How can games happen to preserve player safety while allowing fans to enjoy the sport?

It appears many do not share the views of games without fans being productive:

FYI: In a Ketchum Sports poll released Tuesday, 45% of American sports fans said games should not resume until fans can attend, with 21% in favor of games without fans and 17% in favor of current seasons called off entirely.#Rockies

From a quote in a Los Angeles Times article, 45-percent of sports fans said games should not resume until fans can attend. Within this, 21-percent voting in favor of games without fans seems light. Part of the allure of sports lies in its ability to provide solace. During a time of tragedy in the United States following 9/11, baseball and sports accomplished this:

What I remember post-9/11 was how cathartic baseball/football were. Sports helped us heal pic.twitter.com/jlwSuZkKdq

Now, worries about people in attendance did not exist in terms of spreading a harmful disease. But, concerns regarding safety of being in a big crowd as a potential target existed. Still, the games eventually went on with this being one of the most memorable moments in the first game after 9/11 provided by Mike Piazza:

Still one of the best moments in baseball

It not only uplifted a fan base but meant more to even the players who lost the game:

Sports to many of us represent a welcome escape. And at this time, a needed one. This pandemic provides baseball a chance to be a beacon of hope and to grow its product. Rushing to the field would be a catastrophic mistake as would not having a season. Players like Nolan Arenado seem to be chomping at the bit to play, so how can it happen.

Ever been to a NASCAR race? Seeing the flyovers at one brings about goosebumps. Resuming spring training in May seems too rushed. However, targeting July fourth as a triumphant return for Opening Day makes so much sense. A national holiday coinciding with the resuming of its pastime creates an opportunity for major league baseball. Flyovers at stadiums, even if without fans can be shared with them being televised or if people line up in the streets to witness them prior to the first pitch.

Cookouts, family, and baseball on the fourth. Plus, more accessibility to the players. One player on each team can wear a mic as utilized so well in limited spring training games. Bring the personalities of stars to the fans. Not only could baseball be a part of the healing from the pandemic, it could spark a new generation of fans. Starting late comes with a different set of circumstances for fantasy, but a 100-game schedule sprint to the finish could make for an intriguing postseason enacting change for the future.

It would also put the focus on the game rather than the rule changes which seemed so prevalent not too long ago. So, first step a way to test our nation to insure safety as alluded to in this tweet from Andrew Baggerly:

We all want real live baseball back. Apart from my livelihood depending on it, I drafted a rotisserie team that has a chance to be damn good! But until testing is pretty much available on demand, I don’t see how it’s even a consideration anytime soon. https://t.co/tzMomZMu6C

Also, for fantasy leagues, considering making a better injured list system may be necessary. If a player contracts the virus, a 14-day quarantine could be instituted forcing fluidity to rosters:

Just to update this story on baseball leagues in Asia: Casey Kelly’s 14-day quarantine ended today, allowing him out of his apartment and to join the LG Twins of the KBO. ‘Never thought I would be so excited for practice,’ he texted. https://t.co/yaQAfpixx4

Plus, the Mike Trout effect as explored in this quote from the Bill Shaikin article in the Los Angeles Times:

How factors outside of baseball will be handled will cause ripple effects in fantasy. It’s all to be taken with a grain of salt. Personally, going to side with hope. Hope for games to resume with an eye on the July fourth Opening Day scenario. Hope games can be seen on television by all without worrying about blackout rules. Make the game great again for goodness sakes. Allow access to players and their personalities. Plan for a truncated season with more teams in the playoffs, it should be welcomed.

Most importantly, fantasy owners will need to be fluid and adaptable to the circumstances baseball provides in the coming weeks. For those like me who need visual proof of maintaining hope baseball returns:

It is #MLB, #MLBPA's job to consider all possibilities for when and how the game returns. Many were discussed Monday. Raising in Arizona was reportedly one. Invites many questions, but offers one clear answer:

They cannot afford to lose the 2020 season.https://t.co/dRSSJRQLPt

Losing the season would be rough. So, focus on the positive and how teams continue to help those around them:

The Marlins have donated authentic jerseys, uniform pants, and t-shirts to source the production of 7,500 masks for the South Florida community. #JuntosMiami #WRECares pic.twitter.com/Oq3cs8rqMU

Baseball can be a game to provide solace in a time of our country’s need. So, remain ready and poised like Wilson Ramos:

Sports ability to transcend tragedy in times of need make them necessary in our culture. Not everyone needs to love baseball, but it represents hope at a time we need it most. Until next time, be well and look for an overview of the first and last 100 game samples which could yield some wild fantasy seasons in 2020. Here’s to a cure to Covid and hope our game resumes by July.