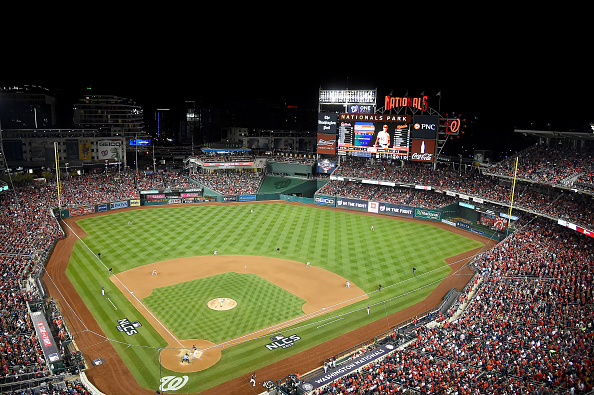 Trying to remain positive, the premise of this will be exploring how schedules could affect early performance in fantasy if games resume in June. This feels like a best case scenario at this point, but one which may allow for competitive advantages in fantasy as a result. As alluded to in the American League version of this, a quote from Jayson Stark of The Athletic:

Again, our own Jim Bodwen shared if games indeed start in June, the major leagues could try to put the games in May in October prolonging the regular season. For the purposes of this exercise, projected winning percentages using the work of Dan Szymborki of Fangraphs were applied to each team in the National League then factored in for each month and an overall strength of schedule for all 15 teams. Unlike the American League, the senior circuit only features five teams with a win percentage below .500 due to the wider range of teams forecast to finish at or near .500 in the standings. Here’s the five teams with the easiest schedules in a potential 101 game sprint from June forward:

As a frame of reference, all but four American League teams own a cumulative win percentage of opponents with a .500 record or higher whereas 11 teams in the National League do. This could be worth noting. This sets up for a rough shortened season for Miami (.5207), Atlanta (.5148), Colorado (.5132) and San Francisco (.5124) in regards to quality of competition. Of course, Los Angeles skews the National League West teams opponent quality but keep in mind 11 of the 15 teams in the National League project to finish or above .500 using Szymborski’s data. Each team’s schedule and notes of interest will be explored.

More time off from games allows Cole Hamels to get healthy providing more depth to Atlanta’s rotation. With Kyle Wright and Ian Anderson waiting in the wings along with a resurgent Félix Hernández this spring, perhaps the team can weather the storm of a tough schedule in this scenario. How Mike Foltenewicz, Mike Soroka and Max Fried fare may decide Atlanta’s fate. Any sort of injury to the top half of this lineup could be scary and fantasy owners should be intrigued by where Dansby Swanson hits in the lineup. He continues to fly well below the radar at a deep position.

An abbreviated season may help Miami if adding younger players to its roster, but two of their spring standouts shifted to the minors in order to protect control years:

The Marlins have optioned OF Monte Harrison & P Nick Neidert to AAA. Harrison had a strong spring and when/if there is a 2020 season will likely make his MLB debut.

Fantasy owners will track Monte Harrison for cheap stolen bases once he’s promoted or benefits from potential expanded rosters. However, for those mining for cheap saves, it could be tough sledding after June due to how things align for Miami depressing what little upside Brandon Kintzler offered. Hope lies in the extra arms the Marlins could deploy if using a six-man rotation in an evolving baseball environment in any sort of compacted schedule.

Losing Noah Syndergaard to Tommy John surgery only reinforces there’s no such thing as too much starting pitching depth. Suddenly, the rumors of trading Steven Matz subsided and this moved up Marcus Stroman in the rotation. A rebound by Rick Porcello remains below the radar at a depressed price and Mets fans can focus on Jacob deGrom hitting 99 MPH with his fastball this spring while hoping he gets positive migration to the mean in wins. He deserves them.

Newly added Zack Wheeler and Didi Gregorius will need to step up to keep the Phillies in the periphery of the playoffs in a truncated season. Gaining recent steam, keep tabs on Spencer Howard possibly winning the last spot in the rotation if Philadelphia’s pushing the chips in for a playoff run. Especially given Vince Velasquez may be most effective as a reliever.

Not only can Max Scherzer get healthy with this delayed start, the Nationals also own pitching depth with Austin Voth potentially starting the season in the bullpen. How teams handle starting pitchers could vary but a shortened season helps Scherzer and Strasburg log more innings coming off a deep postseason run. On offense, the lineup remains in flux and could be fluid during the year. Fantasy owners hope Carter Kieboom can play third base well enough to be a post-hype breakout candidate. Pump the brakes on Victor Robles . Prior to the delay of spring games, he lost his candidacy to hit leadoff, depressing his stolen base upside a bit.

There’s not too much to debate with the Cubs roster. We know Kris Bryant will hit first in the lineup boosting his run totals but resulting in a loss of RBI in his projections. Can Kyle Schwarber carry over his second half surge from last year? Will the real Ian Happ please stand up? For Happ, how he handles fastballs will determine if he can rebound or if he’s a Quad-A player. In a division separating four teams by a combined five games, the schedule could be a determining factor. Last but not least, Craig Kimbrel could decide the Cubs fate.

A delayed start to the season allows Eugenio Suárez and Nick Senzel to rehab their shoulder injuries. If the Reds rotation improves weathering the early storm of tough scheduling, this team could set up for a run in the playoffs. A fluid outfield and deep bullpen will be strengths in a shortened season. Shogo Akiyama will hit leadoff against right-handed pitching plus additions of Mike Moustakas and Nick Castellanos make for a long lineup. My dark horse in this division.

Milwaukee gets extra time to set its rotation but Freddy Peralta and Corbin Burnes possess upside in a shortened schedule. Lost in the shuffle, Corey Knebel could be ready once the season actually resumes adding much needed depth to this bullpen.

As currently constructed, no team would lose a chance to trade veterans more than Pittsburgh:

Say there’s no MLB season in 2020. Keone Kela, Jarrod Dyson and Derek Holland are UFAs. Hurts the Pirates in a hypothetical scenario where they would’ve done well and become trade chips at the deadline.

A key part of this tweet, Keone Kela , He gets early hype in drafts for saves upside but his volatile personality and spotty track record of health makes him a risky proposition. Knowing he’s a trade chip means taking Nick Burdi on any team with Kela on it. In fact, Burdi represents a favorite stash target for saves based on his spring (8:1 K:BB, 4.2 IP). Although the team disappointed fans demoting Ke’Bryan Hayes, it may not be long for him to overtake Colin Moran at the hot corner. Patience and pray for a season Pirates faithful.

Buoyed by the strong springs of Kwang-Hyun Kim and Daniel Ponce de Leon , the Cardinals could benefit from the schedule along with a fluid rotation. If the season resumes in June, the ninth inning remains in potential flux but it allows more time for Jordan Hicks to rehab with an eye on a return in August. Alex Reyes did get demoted late in camp and how he’s used in the minors will foreshadow his role when back in the majors. As time drifts in his development, perhaps he will shift to the bullpen especially given how things transpire with the rotation.

A more open playoff system could help Arizona along with the furthered development of Zac Gallen. Of course, a delayed start could affect Gallen’s spot in the rotation with Mike Leake rehabbing but expanded rosters should keep Gallen in the majors. It makes zero sense to keep one of the team’s best arms out of a starting spot in a shortened season where every game matters. Adding Starling Marte atop the lineup fuels this offense and a healthy Ketel Marte enhances it. Lost in most drafts, David Peralta could provide batting average upside for those seeking insulation in the category.

Not much will get better for the Rockies sidled with questionable contracts and a frayed rotation. Yes, Kyle Freeland could bounce back and German Márquez looks great on the road, but an unfavorable potential schedule and stacked division work against Colorado. Sam Hilliard survived cuts, but will he be in a platoon or fall victim to the Rockies using veterans over rookies as past practice warns? Also, can Wade Davis justify his contract or will this team use him too many times as the closer over Scott Oberg ?

If there’s one franchise in the National League primed to take advantage of a fractured season, it’s the Dodgers. Armed with a bevy of arms to fill rotational spots, Mookie Betts atop the lineup and a rejuvenated closer (Kenley Jansen ), Los Angeles could thrive in a sprint. While many try to discern how Gavin Lux will be valued, as time drifts like his average draft spot, he could be a bargain at his present price point. Not sure if Will Smith will carry a high enough batting average to justify his spot in drafts, tread with some caution. Another overlooked aspect, representing a ratio eraser, Clayton Kershaw gets a boost in production if inning totals become depressed across the landscape pushing him into the top-10 with a more level playing field.

Despite losing Andres Muñoz to Tommy John surgery, the Padres bullpen remains loaded with talent to shorten games. Especially important in a shortened season. San Diego also could man a six-man rotation if they choose with Cal Quantrill battling Joey Lucchesi for the last spot in a five-man staff but opening the door for adaptability due to expanded rosters. Especially if Luis Patino or MacKenzie Gore take over rotation spots as the season ensues. Wil Myers showing signs of life in the spring also fuel late round speculation on a player with power and speed upside in his skill set. Last, Trent Grisham emerging as a center field option could be beneficial on the right side of a platoon hitting lead-off for San Diego.

So many questions surround the playing time for San Francisco with its top spring hitter being non-roster invitee Darin Ruf (.429 average 12-for-28, nine extra-base hits, three home runs). Mauricio Dubon represents an under the radar flier at middle infield projected for double digits in home runs and stolen bases. No word on the health of Tony Watson entering the season in a shared closer role but keep tabs on Tyler Rogers, lesser known brother of Twins closer Taylor. Could expanded rosters get Joey Bart to the majors sooner? Time will tell.

This proves to be a fun exercise seeing what could be on tap in a condensed season with hope for games happening in June. Our own Howard Bender mused about the impact of rosters potentially expanding at the start of the season to protect starting pitchers:

Digging on the decision to expand #MLB big-league rosters to 29 https://t.co/7R1PahS0so

Until any announcement happens, it’s all speculation. Use the data above in the event things pick up in June. Personally thankful for this platform and be sure to stay ahead of the competition on Fantasy Alarm. Be well and be safe.