Pomeranz isn't impressing. Matz is headed to the DL, and it sounds like Smyly might be too. Norris is dealing with dead arm, Sanchez blister sounds like no big deal and Wacha looks sharp, but... 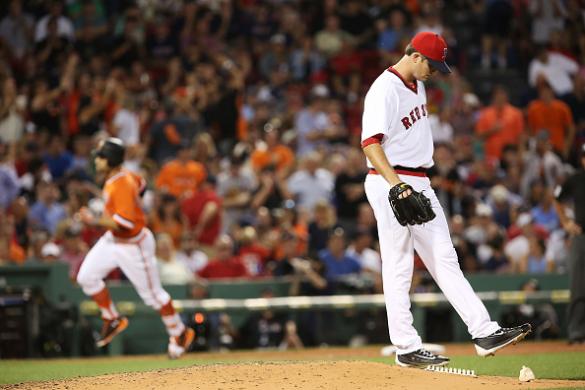 Matt Boyd is the 5th starter for the Tigers beating out the suddenly surging Anibal Sanchez. Boyd also pitched very well in spring with a 2.49 ERA and zero walks over 21.2 innings. He deserves the spot but is still a streaming option in mixed leagues.

Carter Capps will open the year on the disabled list as he works his way back from Tommy John surgery. He could be the closer at some point for the Padres, but as I’ve said all offseason Brandon Maurer has been overlooked by most in the fantasy game.

Jeurys Familia finally got news on his suspension and it was better than anyone thought it would be as MLB suspended him for only 15 games for violating the joint domestic violence, sexual assault and child abuse policy. I don’t know all the details, but given that the police didn’t press charges I’m still unclear how MLB can suspend a player. "The evidence reviewed by my office does not support a determination that Mr. Familia physically assaulted his wife, or threatened her or others with physical force or harm, on Oct. 31, 2016. Nevertheless, I have concluded that Mr. Familia's overall conduct that night was inappropriate, violated the policy, and warrants discipline," MLB commissioner Rob Manfred wrote. Regardless, Familia’s out for just under a 10th of the season. The expectation is that Addison Reed will close for the Mets while Familia is out.

Koda Glover retired just one of three batters he faced Wednesday. He was also called into the game in the 5th inning. There isn’t an announcement yet, but I think things are trending back toward Shawn Kelley being named the closer. Regardless, the team doesn’t fully believe in either arm or they would have made the call a long time ago. That means that no matter who is named closer for Opening Day, the other guy should still be rostered in mixed leagues.

Jon Gray threw 88 pitches Wednesday allowing four runs, three earned. Seems like his toe is alright. He should be able to take the ball the first time through the rotation.

Drew Hutchison has been sent to the minors by the Pirates after imploding for nine runs allowed in his last outing. Too bad. I really like the arm. Seems likely that Tyler Glasnow will be the 5th starter though he too has struggled in spring meaning the gig could go to Trevor Williams.

Sounds like Lance Lynn is likely to make his first turn through the rotation for the Cardinals on April 5th. They want to see how he feels and throws in his next outing before making it official as he left his last start with a rib issue.

Steven Matz won’t be available for the start of the season cause of that elbow and he’s having further tests run. Speaking of running, I would run from Matz as quick as I could. Seth Lugo or Zack Wheeler will open the year in the rotation for the Mets.

Daniel Norris (dead arm) threw Tuesday and is said to have no pain. At the same time, Norris was bombed for nine runs over three innings Monday and all of a sudden the ascension to stardom has dropped him back to the no-man zone.

Drew Pomeranz ends the spring with an ERA of 8.25 after giving up three runs in four innings Wednesday. I’m just not buying the oft injured one being healthy all season. Nope. In fact, sounds like his manager is even concerned. The club also wants to see Pomeranz reach 90 tosses before he’s given the 5th spot (he threw 76 pitches in his outing Wednesday). You’ve been warned all preseason with Pomeranz.

Aaron Sanchez popped a blister on his hand the other day. Seems like it’s a relatively minor issue as he’s still lined up to take the ball the first time through the rotation in week one. He might skip his final start in the minors this weekend and just throw a side session, but it sounds like he should be good to go.

Drew Smyly will not make his start Friday. I’m very nervous as I write this. Apparently Smyly "didn't feel great" after his bullpen session Tuesday. He is said to be dealing with a “soggy” arm at the moment. I have no idea what that means, but it ain’t a good thing. Smyly looked great in the WBC but gave up three homers in his first start back in big league game. "At this time of spring you're always a little concerned," manager Scott Servais said. "We're getting close to Opening Day. But I don't want to rush to any judgments. We'll just wait and see what the docs say and go from there. I don't have any timeline. The doc will take a look and fill me in." If Drew isn’t ready to go for the start of the season I would have to think that Ariel Miranda would open the season in the rotation.

Chris Tillman (shoulder) hopes to return to the Orioles rotation by the end of April. He’s set to throw in extended spring training on April 11th.

Michael Wacha allowed two runs in four innings in his last tune-up. He finishes spring with 22 strikeouts in 26 innings and looks solid at the moment. However, as I noted in his Player Profile, I simply cannot trust his arm.