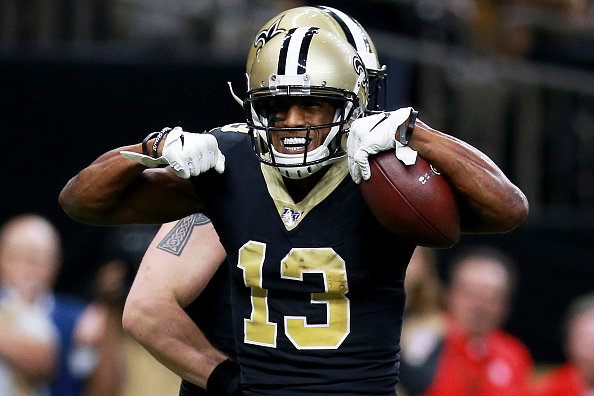 There’s a time and place for upside and no fantasy team should be devoid of players that could reach their ceiling in 2020. However, when there’s too much upside and “what could be’s” on your team and not enough reliable players, you could be in some trouble. These players that are consistent tend to not necessarily be the flashy or sexy picks, and likely have guys around them that have larger upside that could be league winners. There’s a time and place for upside, but amidst those picks, it’s the time to find the guys that can balance on your team and offer a reliable floor that allows you to take those risker, upside plays.

Consider these age-old adages that I just came up with. These have certainly been said before my someone in the world, so they aren’t necessarily mine, but they are statements I believe.

You draft consistency to afford yourself the luxury of drafting guys with higher ceilings and lower floors.

You don’t build a house with the ceiling first. Build off your foundation (your consistent, high-floor guys).

The more risk you take early, the more you need to double down on consistent guys in the middle of the rounds. Forget the sexy picks, and get the guy that will help your team overall.

Let me provide some statements here that may put things into context. What if I told you, per data from RotoViz, that…

Tom Brady scored more fantasy points than Gardner Minshew last year, but Minshew had more weeks as a QB1 than Brady (43% to 38%).

Once he took over the starting role, Ryan Tannehill was a QB1 58 percent of the time, which was comparable to Deshaun Watson (60%).

Mike Evans scored the 12th-most fantasy points in a Half PPR format, but it may not have felt like it for his fantasy owners in 2019. Last year, he had as many games under 10 fantasy points (5) as he did with 15 or more (5). WILD! It’s not that Evans wasn’t valuable to his fantasy owners last year, but he ended the week more often as a WR3 or worse than a WR1, where he is routinely being drafted at.

You can do this with many players at seasons end and it’s a really neat exercise to showcase worth to a fantasy team. It’s not meant to discount top tier players that thrive on big weekly outputs to the occasional clunker, but if you had Mike Evans last year, a guy like Robert Woods would have been great for your fantasy team. Sure, he probably won’t explode like Evans will, but Woods’ weekly 15 or so points helps offset those weeks that Evans registered a point total in the single digits. However, you can use numbers from last year to help with forecasting 2020.

Aaron Jones is a trendy pick here in 2020, although it seems like you’re on either end of the spectrum with him, and there’s no middle. However, Todd Gurley is washed up and isn’t a flashy pick. However, in Half PPR formats, Gurley had fewer games under 10 fantasy points than Jones, as well as just three games fewer with 15 or more fantasy points. Right now, you can get Gurley nearly 20 picks after Jones, per NFFC data.

Injuries are mostly out of your control when drafting, but some guys are injured year after year, and while the upside is there, if you don’t bank enough stability, you’re helping yourself, what, maybe two or three weeks out of the year? If you don’t have a stable core of receivers, and there’s a bunch of risk, is drafting Will Fuller the right play? 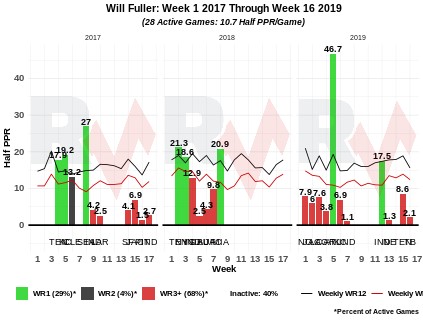 Look at 2019. That near 50-burger against Atlanta was awesome, but coming off four straight clunkers, did many even have him in their starting lineup? After that game, just one double digit outing, and since the start of 2017, you can see he has been inactive 40 percent of the time. The best ability is availability, and after that, it’s consistency.

Additionally, it’s the same concept with rookies. Jonathan Taylor and Clyde Edwards-Helaire are hot commodities right now, but both are far from devoid with talent in the backfield with them. Bob Lung does a whole piece on rookies and consistency and the overall results tend to be underwhelming in most situations. I AM NOT SAYING TO AVOID THESE TWO ALTOGETHER! However, be careful pushing up relative unknowns when you have some guys available shortly thereafter that may have the ability to be more consistent on a weekly basis in terms of volume, scoring output, etc.

Especially with rookie wide receivers, yes, saying I selected CeeDee Lamb or Jerry Jeudy in the 10th round may sound better than Brandin Cooks or Marvin Jones , but these guys are the epitome of “not super exciting, but they get the job done.” In PPR formats, Cooks has been a top 24 wideout 39 percent of the time, while Jones comes in at 34 percent of the time. For a frame of reference, here’s how some of the rookie receivers fared in 2019:

The point of the draft isn’t to take all the flashy names and appease the thoughts and opinions of your league mates. It’s the time where you assemble your team and build the framework of a championship contender. DO NOT be worried about the optics of a particular pick, especially if you believe in that player outperforming his draft price, or his value added to your team. Yes, CeeDee Lamb or Justin Jefferson carries a better name value and more “draft appeal” than someone like Brandin Cooks , but by seasons end, will it play out that way? It’s hard to predict that here in the middle of June, but what it ultimately comes to is balancing your team with a healthy blend of upside and reliability, so that it’s going to take a good week to beat you on a daily basis.

Make that your goal this draft season. Build the framework of a team that even on your worst week, it’s going to take a solid week from that other team to beat you.

The best ability is availability, but after that, it’s consistency.