Colby Conway analyzes the draft strategy of waiting on quarterbacks. Is it the right approach? 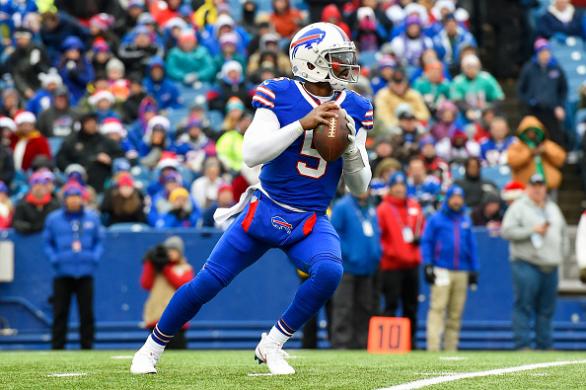 For the most part, everyone goes and grabs a star running back and wide receiver early in the draft. Everyone has a good idea of how they want to attack those two positions, but the quarterback position is one that baffles many. Do you take Aaron Rodgers over your second running back or wide receiver? Should you wait and bolster the other parts of your lineup and then take a gamble on a quarterback outside the top 10? Of course, league size matters as well as how the draft plays out, but in general, waiting on a quarterback seems to be more beneficial for a fantasy squad.

Based off Howard Bender’s Mock Draft Army last season, these were the top 10 quarterbacks drafted. The column on the far right indicates where the player finished in total points at his position.

Only four quarterbacks finished among the top 10 in the position, while five of the other six finished 15th or worse. Sure, Brady had the suspension, but the other guys simply disappointed. Signal callers like Rodgers, Luck and Brees all paid off, but 30 percent of the guys doesn’t make me feel secure nabbing a quarterback instead of a solid second running back or receiver.

Here are the next 10 guys from last year’s Mock Draft Army and their respective finish.

Atlanta’s Matt Ryan was 21st in the Mock Draft Army last year, so he just missed the cut. However, save for Tony Romo, the output of quarterbacks 11 through 20 is much better, especially considering you could have had these guys multiple rounds later.

As you can see, this second batch of quarterbacks, sans Romo, wasn’t too far off from the top 10. Cousins went on average 100 picks after Rodgers, but Rodgers did score 80 more fantasy points. On the other hand, Andy Dalton went over 100 picks after Roethlisberger, and managed to outscore him by eight points. Sure, it may not seem like much now, but perhaps taking Dalton a few rounds later would have graced you Emmanuel Sanders as your WR3 instead of Will Fuller.

Obviously, you need more than one wide receiver, so while that spread of 45.9 for receivers is less than that of quarterbacks, ideally, you’re going to have at least two receivers within that top 17. The best way to ensure that is to stock up on skill players early.

Aaron Rodgers had the most points at the position last year, while Buffalo’s Tyrod Taylor had the eighth-most. However, when you average it out, Rodgers’ weekly output was just 5.7 points more than Taylor. With that in mind, was taking Rodgers around pick 50 more beneficial to your team than drafting someone like Demarco Murray, Greg Olsen or Doug Baldwin? If you did take Rodgers, back around Taylor’s 171.9 ADP are guys like Will Fuller, Mike Wallace and Shane Vereen.

Here's the thing when it comes to your strategy on quarterbacks. There is much more to lose than there is to gain when drafting a quarterback so early. Not only are you not taking an important skill player, but you’re essentially banking on that quarterback to put up similar, or better, numbers from the year before. Current projections have Rodgers, Brees and Luck scoring fewer points than they did in 2016. Of course, projections aren’t the final word, nor should you base your whole strategy off them, but it is something worth noting.

Lastly, the overall point output is something to consider when deciding what strategy you’re going to employ in your drafts. 200 passing yards and a touchdown is doable for most quarterbacks in the National Football League. In most scoring formats, that comes out to 12 fantasy points. In standard scoring formats, that will take a skill player either 120 rushing/receiving yards, 60 rushing/receiving yards and a score, or two touchdowns. If you take a quarterback early, finding a skill player with the ability to produce the above outcomes often is rather slim.

In last year’s draft guide, it was said that waiting on a quarterback in 2015 was more effective and efficient. 2016 produced similar results. Deciding on your strategy for a quarterback can surely be conflicting, but it’s hard to ignore results from the prior year. Passing up on the fantasy appeal of Rodgers and Brees can be difficult, but perhaps waiting a few rounds and snagging another gunslinger is more beneficial for your team.

Should you wait? Should you take a star early? Ultimately, that decision is yours. Do your due diligence and employ various strategies in different mock drafts and determine which team turns out the best in your eyes. Whether you wait on a quarterback or not, don’t wait until draft night to solidify your strategy.