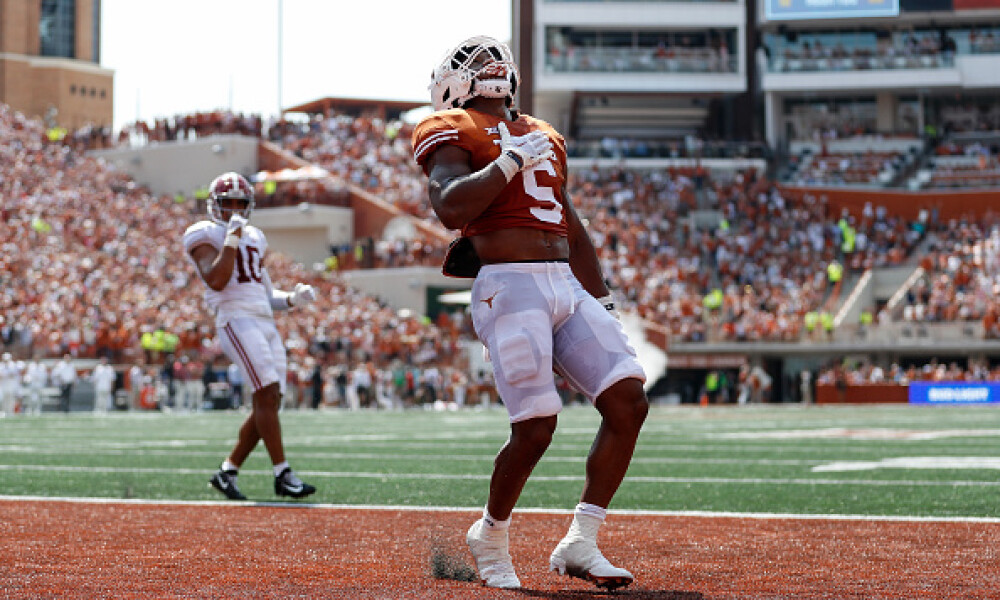 College Football Week 3 continues with a Saturday Night (7pm ET) slate of games for our CFB DFS lineups! If you're looking to build CFB daily fantasy lineups on DraftKings or FanDuel, we have you covered as DraftKings will be carrying eight games while FanDuel presents us with 11. Check out all the CFB DFS top picks, lineup strategy, teams to target, and value plays to lock in before the action begins. Remember, you can access all of our College Football DFS coverage with a Fantasy Alarm All-Pro Subscription. If you have any questions about CFB daily fantasy lineup strategy for Week 3 or beyond, ask away in the Fantasy Alarm Discord chat. Plus, check out our college football daily projections and CFB DFS lineup generator for more winning picks. Now, let's get into the CFB DFS top plays and lineup picks for College Football Week 3 Saturday Night:

CJ Stroud got off to a slow start in the first week of the season, as the Buckeyes barely got past Notre Dame 21-10. He completed 24 of 34 passes for 223 yards and a couple of scores.

Stroud took a big step towards silencing his critics last week, leading Ohio State to a 45-12 victory over Arkansas State. In the win, Stroud hit on 16-of-24 passes for 351 yards and four touchdowns. One worry is that due to an increased emphasis on the run game, Stroud may not put up the same lofty numbers that he did last season. The Buckeyes are 32-point favorites tonight over Toledo, so we also have to worry about the blowout factor. GPP play due to price and the fact that we may not see a full game out of the OSU leader.

Taulia Tagovailoa was obviously frustrated with the way he played in Maryland’s season-opening game against Buffalo. He failed to record a touchdown in the 31-10 win and threw for only 290 passing yards and one interception as his running backs did all the work for the offense. Last game was a different story as he picked apart  Charlotte’s defense on the road throwing a career-high four touchdown passes in just the first half of Maryland’s 56-21 thrashing of the 49ers. He finished with 391 yards and five total touchdowns in the victory, completing 87 percent of his passes. Look for a shootout tonight against opposing quarterback Tanner Mordecai and SMU. This is the highest game total on the DK slate and both quarterbacks are firmly in pay in all formats.

This should be a “get right” game for Anthony Richardson after last week’s terrible performance against Kentucky. He had two turnovers and at least a dozen wayward throws where he missed everywhere. Richardson completed 14 of 35 passes for 143 yards in the 26-16 loss and he ran for just 4 yards. Tonight’s game against South Florida is a nice well-timed matchup against a team that he owned last season. Richardson torched USF off the bench running four times for 115 yards and a touchdown and completed all three of his passes for 152 yards and two scores. Take that game and this season’s opener against then-No.7 Utah where he ran for 106 yards and three scores in a remarkable victory in the Swamp and we should get a big fantasy game out of the Gator quarterback. Top GPP play

Texas is a prime candidate for an emotional letdown at home after a highly competitive and gut-wrenching loss to Alabama last week. Enter Frank Harris and UTSA who are only 11-point underdogs. UTSA is one of the best teams in Group of Five and Harris is as dynamic as any player in Conference USA. Harris was the 2022 C-USA Preseason Offensive Player of the Year, and he’s playing like a Player of the Year- he is the national leader in total offense at 394.5 yards per game and currently paces C-USA and ranks sixth nationally with 348.0 passing yards per game, and his six passing TDs stand 10th among FBS players. averaging 348 passing yards per game, the sixth-highest mark in the nation. He also has 93 rushing yards and a touchdown on 16 attempts which is almost six yards per rush. Harris also has played quality teams, not cupcakes. UTSA opened the season with a 37-35 overtime loss to Houston (one of the best Group of Five team) and then came back with a 41-38 overtime victory over Army, which won nine games in 2021. At only $5.7K on DK, Harris is the top QB value of the slate.

Robinson ran for 1,127 yards and tallied 1,422 total yards from scrimmage and 15 touchdowns in 10 games last season as he is arguably the top running back in college football this season. In Week 1 against Louisiana-Monroe he had just 71 rushing yards, but only on 10 carries for an average of 7.1 yards, along with three catches for 40 yards, and scored two touchdowns. Last week against Alabama, he ran the ball 21 times for 57 yards and a score. UTSA is a good squad, but Bijan is matchup proof and the top running back of the slate on both sites.

Abanikanda had a poor opening week performance against West Virginia, but he sure turned it around last week against Tennessee with a career-best day. It was a big boy performance, with 154 yards on the ground and 21 yards through the air on 26 touches, plus a 76-yard touchdown in the first half. Abanikanda was named as the ACC Running Back of the Week. Vincent Davis was the only other running back to get touches (five carries for 15 yards) last week because Rodney Hammond, who did not finish the game against West Virginia did not play against Tennessee. If Hammond is out again expect Abanikanda to get another heavy workload against a Western Michigan rush defense that is allowing 176.5 yards per game on the ground.

Devon Achane is under four yards per carry in two games in 2022 after leading the SEC and second nationally with seven yards per carry in 2021. Tonight, A&M faces Miami (FL.) in a battle of ranked, non-conference teams both looking to avoid a costly early season loss in Week 3. The Aggies need to control the tempo and establish the run behind Achane and even though Miami is 8th nationally allowing 58.5 yards per game on the ground, they have not faced a back of Achane's quality yet this season. A&M's 2022 offense was supposed to be the running game with a big and experienced offensive line making way for speedster Achane but injuries have all of a sudden turned the line into a young group due to injuries, so this is a key game for both teams and a “get right” spot for Achane.

With the loss of star tailback Kenneth Walker III, it appeared the passing attack would lead the way early in the year for the Michigan State offense. That hasn’t really been the case as the Spartans ran for 6.2 yards per carry for 197 rushing yards in the season-opener against Western Michigan, and then another 260 yards and six touchdowns on the ground against Akron in Week 2. The running back tandem of Wisconsin transfer Jalen Berger and Colorado transfer Jarek Broussard has been one of the surprise stories for MSU through the first two weeks. Berger has run for 100 rushing yards in back-to-back games, going for 107 yards and three touchdowns last week against Akron and now 227 rushing yards and four touchdowns on the season (6.9 YPC).

Broussard, meanwhile, ran for 81 yards and his first two rushing touchdowns of the year against the Zips last week, which rose his season total up to 135 rushing yards (5.4 YPC).

It's been just two weeks, but Trevor Etienne has already made his impact on Florida's offense. The former four-star prospect has carried the ball 14 times but already has 110 yards and a touchdown. In the Gators season-opening win against then-No. 7 Utah, which has always been known for a solid run defense, Etienne rushed five times for 64 yard plus his 7.9 yards per rush currently leads the team. While it's unfair to compare Etienne to his older brother Travis, who won ACC Player of the Year twice during his career at Clemson, the ceiling is just as high for the Gators freshman running back and even though there are a lot of mouths to feed in the Gator running back room this is a nice price for the freshman who will see action in what should be a blowout.

Rashee Rice is ready to become SMU’s next great receiver. He started off his senior season with a career-high for receiving yards. He had 166 yards on eight catches and a touchdown against UNT and then last week he caught nine passes for 132 yards and two more scores. He is now #3 in the country with 298 yards receiving and three touchdowns and this Rhett Lashlee offense is showing what it is capable of. Rice has all the makings of an NFL receiver — size, length, explosiveness, and a competitive mentality- and tonight’s game is going to be a big test because he has not faced a cornerback as good as Jakorian Bennet of Maryland. If Rice can put up numbers against the physical Bennett than we are looking at one of the best receivers in the nation.

The Roadrunners’ all-time leader in nearly every receiving category continued to build his legend in an overtime win over Army on the road as he caught 10 passes for the second straight week for 122 yards and a couple of scores. Franklin already has 22 catches for 222 yards and a pair of scores on the season but faces a stiff matchup as an underdog on the road at Texas. This is a solid price for a good receiver making Franklin viable in all formats.

Over the first two weeks of the 2022 season, Emeka Egbuka and Marvin Harrison have been called into a bigger role than anticipated due to injuries to junior wideouts Jaxon Smith-Njigba and Julian Fleming.  Egbuka was rated as a five-star prospect and the No. 1 ranked receiver nationally in the 2020 class and has put his talents on display over the first two games going 9-90-1 in his first game and then 4-118-1 in Week 2. Smith-Njigba and Fleming are expected back this week but at Egbuka’s discounted price he is firmly in play in a game where Ohio State has a 47-point implied total.

Senior wideout Jared Wayne has accounted for nearly 30% of Pitt's receiving yards through two games. He has had to carry the burden of playmaking especially when the PIT offense badly needs a play while the rest of the unit has been struggling- especially new transfers Konata Mumpfield and Bub Means. Wayne has been the WR1 since Jordan Addison left in the spring, but the PITT offense at least thought he had help with the new additions — it hasn’t turned out that way so far this season. Wayne (seven catches for 82 yards and one touchdown) was targeted 12 times in the Tennessee game and expect to see more of the same this week.

Evan Stewart, the five-star true freshman sensation out of Liberty High School, was the nation’s No. 2 rated receiver out of the 2022 class by 274 Sports. He is a generational talent that was the talk of spring and fall camp plus has track speed, soft hands, and can consistently get open. Do not be surprised if Stewart ends up as the teams WR1 soon and leads the team in essentially every receiving category. It could all start this week in a must win game against Miami (FL). His DK price is far too cheap and expect to see a bump up over his two-game total of 10 receptions on 13 targets for 105 yards.