A look at today's MLB main slate and the best DFS stacks to play in both cash games and GPP contests. 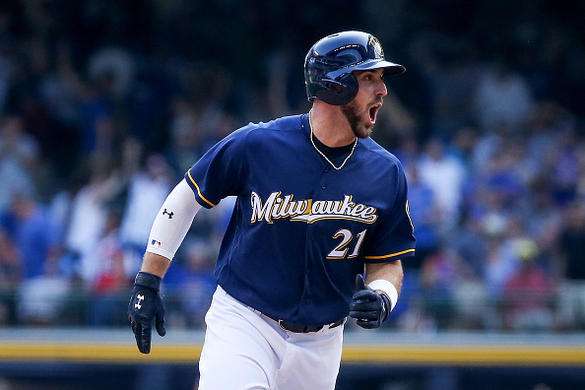 Below are some stacks to consider for Tuesday’s nine-game MLB main slate.

Hitter-friendly conditions are hard to come by on tonight’s slate. We’ve got three games on the generally pitcher-friendly West Coast, there’s a game in no-longer-hitter-friendly Arizona thanks to the humidor, and there are elements in play in Atlanta (wind blowing in from right) and New York (44-degree game time temperature). Thankfully, there’s a game in Milwaukee’s climate-controlled stadium that had the third highest HR as L park factor and fifth highest HR as R park factor last year (per Fangraphs).

The Brewers will host the Cardinals who will be sending Jack Flaherty to the mound. Flaherty made his MLB debut last season with six appearances (five starts) in September. Flaherty had pitched well in the minors prior to his September call-up, but he struggled in the bigs with a 6.33 ERA and 10.6 percent walk rate in 21.1 innings. He gave up four home runs to 94 batters faced with a HR/FB rate of 21.1 percent. The 22-year-old may eventually acclimate to the majors given his minor league track record, but his matchup with the Brewers is a tough one to start the season.

The Brewers have several left-handers who hit right-handers (like Flaherty) well last season. Eric Thames (138 wRC+), Travis Shaw (127 wRC+) and Christian Yelich (123 wRC+) will have the platoon advantage against Flaherty. Right-handers Domingo Santana and Lorenzo Cain fared well against same-handed pitching last year with wRC+ marks of 125 and 114 against them, respectively. Those five hit 1-5 in the order against a right-hander on Saturday, though Ryan Braun being in the lineup would alter that. Braun had a 107 wRC+ against righties last season, so even if he’s in the lineup, the top half of Milwaukee’s order will be very stackable.

Houston’s 2017 lineup was often compared to the famous ’27 Yankee lineup, and the defending champs return every key piece of that lineup from last season (though Carlos Correa could be out of the lineup today after leaving yesterday’s game early). Today they’ll face the cheapest starting pitcher available on either DK or FD, Mike Wright Jr., so it almost seems too obvious to mention them as a stack, but we would be remiss not to mention them.

Houston’s studs like Jose Altuve, George Springer and Correa (if he’s in the lineup) will be chalky plays, and it makes plenty of sense to have exposure to them in cash games. But you could instead (or additionally) roster some guys that will hit in the second half of the order whose ownership percentages might not be quite so high.

Marwin Gonzalez is a switch-hitter who is much better from the left side and actually had the second highest wRC+ of any Astro against right-handed pitching last season. Left-hander Josh Reddick remained good with the platoon advantage last year with a 131 wRC+. And were Jake Marisnick to draw a start against a right-hander, he hit for plenty of power against same-handed pitching last season with a .287 ISO.

Aside from Houston’s offensive prowess and the good matchup with Wright, their ballpark is also a plus for their stackability. The park played slightly hitter-friendly with regard to home runs last season, and the deep centerfield/alleys make the park play up for triples as well. You want extra base hits when you’re stacking, and Houston plays on the hitter side of the ledger in that regard.

Like the Astros, Washington figures to be a popular pick tonight, but there are many reasons to like the Nats. Above we mentioned the wind will be blowing in (from right) in Atlanta, but it’s only a 10-15 mph wind and is somewhat offset by the face that the game in Atlanta will have the warmest game time temperature of the night (though it may be similarly warm in Houston if they open the roof again tonight). All in all, the elements are nowhere near prohibitive to a Nats stack.

The Nats have also owned Atlanta starter Julio Teheran in his career. Active Nats have combined for a healthy .393 wOBA against Teheran in a total of 175 plate appearances. Bryce Harper destroys Teheran with seven home runs off him in only 45 PA. Matt Adams has three extra-base hits in five PA against Teheran, and Trea Turner is 5-for-9 against him.

The Nats had seven hitters that were at least 14 percent better than league average against right-handers last season: Harper, Adam Eaton, Anthony Rendon, Ryan Zimmerman, Adams, Turner and Howie Kendrick. Some combination of those seven has hit 1-5 in the order of all three of Washington’s games against right-handers so far this season, and some combo hit 1-6 in the order in two of three games.