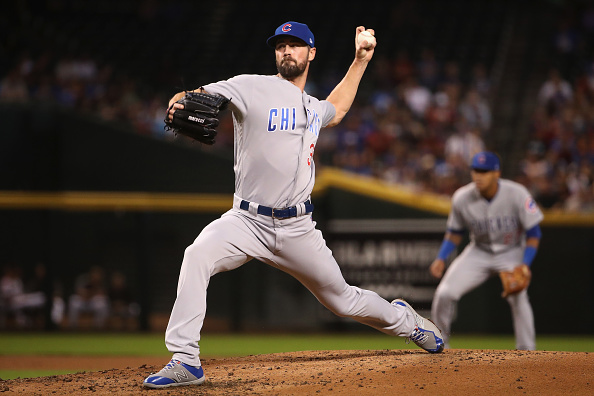 We now head into the final week of the baseball season, and naturally, starting rotations are in flux, as the playoff bound teams set their rotations for either a wild-card matchup, or their league playoff series contests. Realize, please, that teams that are looking to play on past September will likely not overtax their top starting pitching options this week, so even if a pitcher is set to make two trips to the hill, he may not pitch deep enough into the game to rack up his usual set of counting stats, let alone a favorable decision. Of course, those in the top tier are hurlers you would likely start whether they were dual appearance options or only scheduled to toe the rubber once in the upcoming scoring period.

Start each and every one of these pitchers, no matter how long they are lined up to pitch this week. These are the pitchers that helped you in your fantasy efforts this season, and now is no time to hesitate using them, even if you will not get a full pair of outings from them as the season winds to a close. If they were scheduled to only pitch one game, you would not bench them because of that circumstance, now, would you?

Gomber leads off the middle tier this final week of the season, and while he has stumbled a bit in his last two outings, he did twirl three consecutive quality starts (QS) prior to that. While two of those outings were against lesser ran opponents in the form of the Tigers and Reds, the first QS effort at the end of August took place on the road at Coors Field, not a feat to entirely discount. The matchups in Week Twenty-Five could certainly be more favorable, but with the Cards fighting for playoff contention, he and his team will be fighting for every possible win. He is just a so-so K option, and his control needs work, but he is effective in keeping the ball in the park (0.5 HR/9).

Eflin has now held opposing offenses to just one earned run over his last two trips to the bump, including five shutout innings in his latest appearance against the visiting Mets, where he also racked up nine strikeouts. Of course, he was coming off a string of four less memorable starts, so caution is advised if you elect to plug him into your rotation. Also, his first start of the week takes place on the road against the Rockies, so a home start opposing the Braves looks the most positive time to employ his services. He is a good source of swings and misses, posting an 8.6 K/9 through 125.1 innings pitched (IP), and he does exhibit decent control, too (2.4 BB/9 in 23 starts to date).

Jackson, despite still featuring a 93 MPH fastball, is a sub-par K option, with just a 6.8 K/9 rate through his 87.2 IP. Still, hard to ignore his stellar ratio stats since joining the Oakland rotation this season: 3.18 ERA and 1.16 WHIP in 16 starts. He is on the road for both his Week Twenty-Five starts, but Oakland is looking to wrap up a playoff berth in their coming games, and with decent matchups, he is a better two start option than Eflin, who is more of a single game streaming option, in the coming scoring period.

Holland gets a pair of home starts to wrap up his season, and he has been an effective addition to the Giants’ rotation this season. In 33 appearances (29 starts), he has delivered a fantasy-friendly 3.57 ERA and useful if not superb 1.26 WHIP. His control is not the best (3.46 BB/9 through 163.2 IP) but he does provide better than a strikeout per inning (9.1 K/9) with his low-90s fastball. He was roughed up by the Padres in his last start to the tune of four earned runs over 5.0 IP, but he is facing them in his home park this go-around and then takes on the Kershaw-led Dodgers, and that game will be largely influenced by the LA playoff picture as to whether the Giants see a big dose of the Dodger ace, or if Kershaw is just getting a post-season tune up.

Boyd is coming off a disastrous one and a third inning outing at home against the Royals, where he yielded five runs (just two earned) and gave up a pair of dingers. Prior to that, however, he had been effective, giving up six earned runs over 18.1 IP with a 24:4 K/BB ratio. He has been the most effective SP for the Tigers of late, for what that is worth. Although both his starts in Week Twenty-Five are away from Comerica Park, his home/road splits show that as a point in his favor. You could do far worse than trotting him out there in your rotation, which is damning with faint praise, to be certain.

Leake has managed to toss 18 QS (out of 30 starts) this season, but he also has had his share of poor outings similar to his most recent five earned run effort against the Astros, where he collected just three Ks over 6.1 IP. He has been slightly better at home overall this season, and has a pair of home starts on the schedule to wrap up 2018. That is about all that recommends him besides having two starts this scoring period.

Anderson was removed from this last start before the end of the fourth inning, which marks the fourth time in his last eight appearances where he has not pitched through the fifth inning. He has been much better on the road this season, so if you wanted to stream him, the second game of Week Twenty-Five against the Tigers in Detroit would be the best bet. He is a below average K producer with a 7.3 K/9 rate over his 30 starts.

Newcomb has been inconsistent at best over his last seven starts, posting an abysmal 7.44 ERA and 1.87 WHIP during that 32.2 IP stretch. Both is starts in this final week of the regular season are on the road, which bodes well for his production. Atlanta will be tuning up for the postseason, and would love to have Newcomb get back on track, so look the Braves to give him every chance to head into October on a high note, but do not rely too heavily on the struggling second-year southpaw.

The upper few denizens of this final tier could provide some benefit for your pitching efforts in a championship situation. Velasquez is available if you need some K’s to put you over the top in your final matchup week. Bundy would be interesting if the matchups were not so awful. Montgomery certainly has his moments when he is a useful SP, but his inconsistency makes him risky. All things considered, this is a group to generally avoid employing in your rotations, as they have been all season.