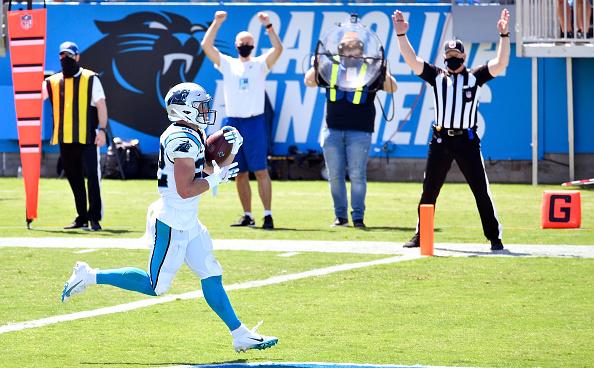 We have reached Week 16 of the NFL Season and hopefully you are gearing up for a championship run in season-long leagues, or just keeping an eye on players for some daily fantasy! Either way, let’s discuss a few of the important names you should be monitoring during the Week 16 prep!

There is hope that this will be the week that CMC can return after missing the past three games for the Panthers. Head Coach Matt Rhule is “hopeful” that McCaffrey will be able to retake the practice field on Wednesday of this week, and he will be further evaluated in doing so. The good news is that if he is present during the Wednesday practice session as the Panthers get ready for their Sunday date with the Washington Football Team, then it should put positive light on his availability for this game. We will hope to have a clearer report on his status on Friday after we scour the practice reports this week.

It is apparent that Diggs did so much running and catching in the Bills decisive win over the Broncos last Saturday that he gained a foot injury in the process. He did actually leave that game later in the fourth quarter, so there is a bit of a severity measure that we likely have to monitor for Diggs this week. The good news here is that the Bills don’t take the field for their Week 16 match against the Patriots until Monday night, so this hopefully should allow that extra time needed for Diggs to recover and heal if this is just a mild injury. We will keep an eye on his status this week heading into the weekend.

Would it make any sense for the Falcons to bring Julio back while he still isn’t 100%? Likely not, but he is listed as “questionable” at the current time as the Falcons begin their preparation in playing a meaningless game against the Chiefs in Week 16. Julio has missed the past three games and has been ruled out with plenty of time before the kick of their games over the past couple of weeks, and I wouldn’t expect him to take the field this week either, but we will keep an eye on his status.

Robison was forced out of the Jaguars loss against the Ravens last Sunday late in the game with an ankle injury. He was not able to return to that game as a result and this has placed a “questionable” tag next to his name as the Jags prepare for their Week 16 tilt against the Bears at home. We have yet to have any new reports to begin the week on the severity of the ankle injury Robinson sustained, but we will keep an eye on his status in hopes to have a clearer status report on Friday.

Zeke Elliott was held-out of the Cowboys 41-33 win over the 49ers in Week 15 with a calf injury after it was expected that he would suit up. After missing the week, it seems as if Zeke may be good enough to give it a go as the Cowboys get ready to play the Eagles in an NFC clash this Sunday afternoon. Head Coach Mike McCarthy said on Monday that Elliott “has a chance to suit up on Sunday against the Eagles,” so there is a little bit of optimism that he will retake the playing field. At this point with how embarrassing Elliott has been this season, would it really matter though? I’m sure there are still some Zeke backers out there, so we will look to report on Elliott once again on Friday.

After missing back-to-back games now, Gibson is “questionable” once again to retake the field of play on Sunday against the Panthers. Gibson was able to participate in a very limited capacity on Friday of last week before being ultimately ruled out for the contest against the Seahawks. There has yet to be any new reports on the progress of the case of turf-toe for Gibson heading into Week 16, but we will monitor the practice reports in hope of reporting back on Friday.

Conner was held out of the Steelers Monday Night Football loss to the Bengals due to a quad injury. Conner was listed as “questionable” to play all weekend as he was able to return to the practice field in a limited capacity on Friday in hopes that he would be ready to retake the playing field. However, he was not able to progress enough to do so. Now, heading into the Steelers Week 16 match against the Colts in Pittsburgh, Conner is in danger of missing a second consecutive game. We will look to see if Conner can make any full-practice sessions this week in preparation.

Parker, along with starting TE Mike Gesicki and WR Jakeem Grant were all ultimately held-out of the Dolphins Week 15 match against the Patriots with injuries. In the case of Parker, he is deal with a hamstring issue. We have yet to hear of any new reports on the Dolphins players as they prepare for their Week 16 clash against the Raiders, but surely, we will have a more definite report when Friday’s report is posted.

Mostert just cannot stay away from the injury bug as he left late in the Niners loss to the Cowboys on Sunday with a new injury, an ankle injury this time around. Mostert has been dealing with a plethora of injuries mostly all season long, a knee that gave him a trip to the IR not to long ago, as well, and now he is in danger of missing yet another game with the newly sustained ankle ailment. He was not able to return to the game against the Cowboys, and we have yet to hear a severity report on the ankle yet, but we will continue to monitor his status during the week and report back on Friday.

M. Stafford - QB
DET1
ESPN's Adam Schefter reports teams are "already reaching out" to initiate Matthew Stafford trade talks.
A trade can't technically be completed until the start of the new league year in March, but it's not uncommon for big-ticket deals to be agreed upon well in advance of free agency. With Deshaun Watson and a host of other starters potentially on the move, it is going to be an unusually explosive quarterback market this winter. So far, the only team has Stafford has been indirectly connected to is the 49ers, who are said to be "monitoring" the situation. 12 days shy of his 33rd birthday, Stafford will have a robust market.
Added Yesterday 4:41 pm (EST)
Added Yesterday 4:41 pm (EST)