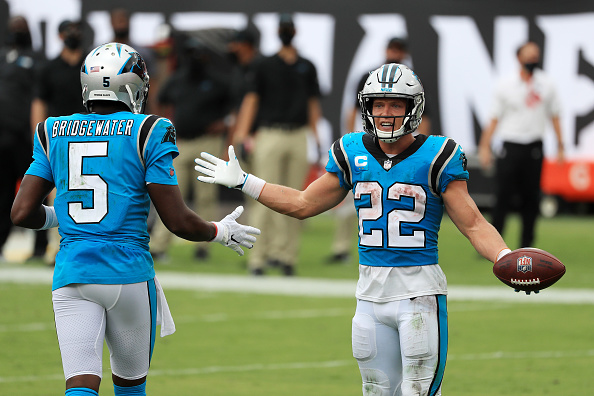 We have now made it to Week 14 of the 2020 NFL Season! If you are still reading this article, then likely you made or are close to making the playoffs depending on your league settings (or just paying attention for DFS). Welcome back to the Fantasy Alarm Early NFL Injury Report for Week 14! Let’s see who we have to keep an eye on this week.

The Panthers will welcome the Broncos to town on Sunday and the “hope” from Head Coach Matt Rhule is that McCaffrey will be able to take the field for this one. With the Panthers electing to not rush CMC back before the Week 13 bye, this does indicate that there is a more than likely chance that he will be ready to re-take the field for Week 14 with the added time off. We will hopefully have a clearer status on CMC on Friday.

Gibson literally only played just a few snaps in the Football Team’s huge win over the undefeated Pittsburgh Steelers on Monday Night Football before suffered a case of turf toe that produced an early exit for this game. Gibson was seen on the sidelines getting taped up in efforts to make the injury playable, however, it was deemed that he would not be able to return. If we have noticed anything about turf toe injuries this year and years past, it is not a fun injury and can likely lead to multiple weeks of absence in some cases. Obviously, Gibson’s next shot at taking the field again will be on Sunday as the WFT travels into San Francisco to take on the Niners, so we shall continue to monitor the practice reports during the week of prep.

Swift was able to clear concussion protocol for the league last Thursday, but ultimately was not able to re-take the playing field when the Lions traveled into Chicago to take on the Bears. It was not due to the concussion, though as Swift was dealing with an illness after clearing protocol. The next chance Swift will get to re-take the playing field will be on Sunday as the Lions welcome in a familiar foe in the Green Bay Packers. After missing his third game in a row, we could perhaps finally see Swift back on the field. We will hopefully have a more concrete status by Friday.

Jacobs was held out of the Raiders win over the New York Jets in Week 13 due to an ankle injury. It was reported by Head Coach Jon Gruden that he felt there wasn’t much confidence that Jacobs would be healthy enough to re-take the field for Week 14 when the Raiders welcome in the Colts to town on Sunday. This obviously isn’t a great first report on the status of Jacobs as we head into the week of preparation. At least the word is early, so there is always room for improvement, and that’s exactly what we will do – monitor the practice reports heading into Friday.

It seems that Golladay is finally getting closer and closer to making a return to the field. After missing his seventh game of the 2020 NFL season, Golladay could have a legit shot at a return for Week 14 when the Lions play host to the Packers on Sunday. Reports stated that Golladay was getting some conditioning work in while the Lions were warming up for their game against the Bears last Sunday, so hopefully this is a positive sign for this week. We will continue to monitor his status for Friday’s report.

Although CEH was cleared and made active for the Chiefs Week 13 match against the Broncos, he was not used on a single play. Clyde missed both the Thursday and Friday segments of Chiefs practices with the flu but was somehow active to play. Edwards-Helaire failed to register one snap, so likely he was still a bit under the weather but was made active to use in key situations that never prevailed. We should feel confident that he will be good-to-go for the Chiefs upcoming Week 14 match against the Dolphins in Miami on Sunday.

Tee was able to play all of the game for the Bengals when they traveled into Miami last Sunday but reports after the game suggested that he “tweaked a hamstring” during the game. There have been no reports yet of the severity of the tweak, but obviously this is something we should keep an eye on as we head into the latter part of the week. The Bengals will play host to the Dallas Cowboys on Sunday, and it is the early kick-off time, so we should have this status before kick either way.

This is not what you wanted to see, nor hear about Johnson after the Lions game against the Bears. It was stated the Johnson suffered a knee injury during the game late in the fourth quarter, and the severity of the injury has yet to be determined. In the event that this does turn-up severe, if Swift is also not able to re-take the field for the Lions upcoming match against the Packers, this would leave Adrian Peterson in a huge workload situation. We will monitor his status over the week.

It wasn’t officially reported, but after the Panthers loss to the Vikings in Week 12, Teddy Bridgewater was reported to have left early before the final play of the game in what was reported as a “undisclosed” injury. I placed the knee as the culprit in the header, as I felt this could possibly what the injury could have pertained to as we know Teddy was dealing with a knee injury before this game. There has yet to be anything new reported on Teddy, but we will look to keep an eye out on the Panthers practice reports this week as they get ready to play the Broncos on Sunday.

Head Coach Joe Judge said on Monday that he will give Jones “every opportunity” to re-take the field for the Giants in their upcoming game against the Cardinals at home on Sunday. Jones already had a one-week absence due to the hamstring ailment, but it seems he could likely just miss the single week with the injury. We will see how he progresses over the course of the week and report back on Friday, but something to keep an eye on.