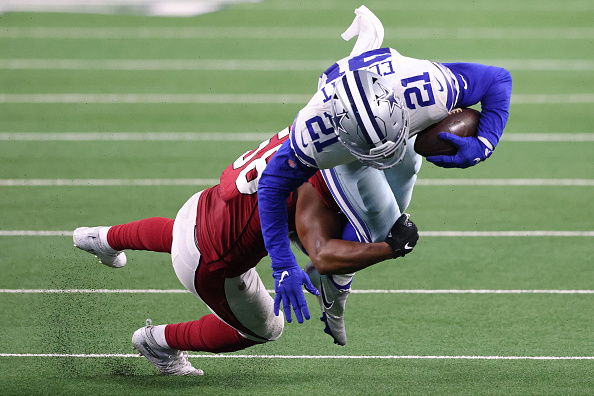 Welcome back to the Fantasy Alarm NFL Injury Report for Week 9! As we head into the weekend there are a few important statuses that we should be monitoring, and we will discuss them here!

Looks as if your time of holding out on CMC to return has come to fruition as it has been reported the Head coach Matt Rhule is expecting CMC to suit up for the Panther’s upcoming game on Sunday against the Chiefs. This was the second time this week that Rhule had made this claim, so all signs point to a McCaffrey return in Week nine.

Reports out of Falcon’s practice at the end of this week have been not been great as Ridley was not able to take part in any of the practices in any capacity. This should lead to a pretty tough road for him to be available for the Falcon’s home game against the Broncos in Week nine, but he is still listed as “questionable” meaning he could ultimately be a game-time call come Sunday. This is a status we will absolutely want to monitor heading to Sunday.

Thomas still is labeled with the “questionable” tag, but the signs are pointing to a return finally for the stud wide-out in the Saint’s upcoming Sunday Night Football game against the Buccaneers in Tampa Bay. Thomas was able to participate in limited sessions for Wednesday, Thursday, and Friday, thus giving us that much more hope that he is finally ready to hit the field once again.

It appears as if Zeke is dealing with a little hamstring discomfort from the Cowboy’s Week eight contest against the Eagles and was not able to take the practice field any in preparation for Week nine. It was reported from Cowboy’s owner Jerry Jones that he still fully expects Elliot to be available and play on Sunday afternoon when the Cowboys play host to the Steelers.

This is one that has already been reported, but if you have not seen Chris Carson WILL NOT be playing in the Seahawk’s upcoming game against the Bills in Buffalo on Sunday. The foot injury that has now taken two games away from Carson is still lingering and he did not make enough progress to take the field. Look for both DeeJay Dallas and Travis Homer to man the backfield for the Seahawks once again with Carlos Hyde still shelved with a hamstring injury, as well.

This is likely just a precautionary status for Jacobs as he is dealing with some illness and a knee ailment. Jacobs was held-out of the Raider’s Thursday practice session, but no worries as he was able to make a return in Friday’s session and doesn’t seem to be in any immediate danger of missing the Raider’s Week nine tilt against the Chargers.

Godwin is still being listed as “questionable” heading into the Buccaneer’s Sunday night home showdown against the Saints with the finger he had to have a procedure on recently to repair fractures. However, Godwin was able to be a full-practice participant in the Buccaneer’s Friday practice session, so this does leave us with a bit of optimism that Godwin is fairly close to ready to re-take the field, if not ready to do so on Sunday Night. We will monitor his status head into Sunday Night Football.

Crowder was just able to barely log a limited practice for the Jet’s on Friday after missing the prior practice sessions earlier in the week and is listed as “questionable” to take the field against the Patriots on Monday Night. The good thing here is he has the extra day to heal up and get treatment, so this could help in his progress. This big key here will be to see if Crowder is able to take the practice field for a second day in a row on Saturday. This will be the report we will want to monitor and look for over the weekend as we head into the Jet’s Monday night game.

Harris is listed as “questionable” as well heading into the same Monday night match up against the Jets as Crowder above. Harris has been dealing with an ankle ailment that only allowed him to see the practice field in limited fashion on Thursday of this week. The fact that Sony Michel is coming off of the IR list this week as well may make this a bit more confusing if Harris ultimately available to go and they share the backfield with the plethora of other backs the Patriots deploy.

Lindsay is deal with yet another foot injury heading into the Bronco’s Week nine match against the Falcons. Lindsay is officially being listed as “questionable” to take the field and was only able to practice in limited fashion after missing the Bronco’s Wednesday practice. Head Coach Vic Fangio reported that he feels strongly that Lindsay will however suit up and play in this one despite the injury.

Darnold is dealing with a shoulder injury that could potentially place him in danger of missing the Jet’s Week nine tilt against the Patriots on Monday Night Football. When Darnold was asked by reporters how he felts about his chances of suiting up, Darnold replied with “yea, we will see how it goes, just taking it day-by-day” on Friday. Another status that could not come to fruition until Monday night, so keep an eye on this one if need be.