Triston McKenzie (CLE – SP) Assuming he’s still available on Waivers, McKenzie should be picked up as a short-term play with long-term potential. In his debut he tossed six innings of one-run ball with ten strikeouts, one walk, and two hits. We’ve seen seasoned veterans struggle to go that deep into the game and he made it look like child’s play. He only needed 80 pitches to get through six innings including 17 swinging strikes. It’s only one start but given the circumstances of 2020 it’s easy to get excited. His next start will come Friday against St. Louis with a matchup against the Royals the following Wednesday.

Alec Bohm (PHI – 3B) Bohm made the waiver column following his initial callup, but he’s performed really well upon initial review. He launched his first career home run on Sunday and has four multi-hit games since August 16th. It’s a small sample size but he’s slashing .344/.462/.531. Perhaps the other impressive factor with Bohm has been his patience at the plate. In his first ten games he drew seven walks which have helped elevate his OBP, thus making him a pretty solid grab in points leagues as well.

Justus Sheffield (SEA – SP) After a pretty awful start to the short season, Sheffield’s strung together a trio of good starts. He’s logged three straight quality starts picking up two wins as well. He’s allowed two earned runs and two walks over his last 18 innings of work with 16 strikeouts. He seems to be locating his pitches well enough lately as he’s been surrendering more soft contact to opposing hitters and they’ve been putting more balls in the ground. His next matchup will come against the Angels who are tied for the worst record in the American League with the Boston Red Sox.

Emilio Pagán (SD – RP) With Drew Pomeranz and Kirby Yates sidelined with injuries, Pagan is in line for save opportunities on a Padres team that has been providing plenty of run support lately. He blew his first save opportunity on Thursday, but he followed it up with save opportunities Friday and Sunday. He’s given up quite a few walks and hasn’t generated the strikeout numbers we saw during his time with the Rays, Athletics, and Mariners. But he’s done well enough in his last two save opportunities. He hasn’t allowed a hit, he’s allowed just one walk, but again, no strikeouts. Be patient and see if the strikeouts come along. Worst case scenario, he’s still a pitcher lined up for saves.

Luis García (WSH – SS, 2B) Garcia is another one of these organizational prospects that was called up not too long ago. He’s done well in the handful of games he’s appeared in. He won’t turn 21 until next May but he entered Monday hitting .357 and he has scored six runs in nine games. If he can keep getting on base that may move him up just slightly in the batting order, but I wouldn’t expect him too much in that regard. The other knock on him is the plate discipline. Keep in mind, he isn’t old enough to drink so it’s not exactly surprising to see a 24.1% strikeout rate, and a 3.4% walk rate at this juncture. He’s still putting the bat on the ball and is available pretty much everywhere.

Giovanny Gallegos (STL – RP) I’ll take the potential ‘L’ with the St. Louis bullpen, but I’m not ruling out the fact it could be a committee with

this organization at the moment. It could be pretty telling by whoever gets the next save opportunity. Andrew Miller took the loss on August 19th after collecting saves on the 15th and 17th. Since then he has been used in lower-leverage situations although he did work the eighth inning on Sunday in a game the Cards won by four runs. Giovanny Gallegos logged the most recent save for the Cardinals, but that came on Saturday. He’s only made five appearances on the year, but in 4.2 innings of work he has allowed just one hit, no walks, and has seven strikeouts, all of which have come in his last four outings. Hopefully we get some clarity on this opportunity in the coming days. For now, it’s a bit foggy.

Ian Anderson (ATL – SP) Another rookie to get called up. Surprise, surprise. Fortunately for you Anderson’s big-league debut on Tuesday was delayed until Wednesday for a double-header so you may be able to still grab him for the debut. How deep he goes is a bit unclear given MLB’s double-header rules for 2020. However, he is viewed as a very strong pitching prospect and naturally fantasy owners will flock to waivers to pick him up. Sadly the start does come against the Yankees in the Bronx. But this is a team that’s battling injuries which seems to be the MO for that organization over the last couple seasons. He’s an elite prospect that can deliver a strikeout per inning at his best. Keep in mind he did struggle with command in the minors and allowed a fair amount of free passes and that could translate to the majors for the immediate future. It’s something he will likely fix further down the road though.

Jordan Romano (TOR – RP) Ken Giles doesn’t have a timetable to return yet, but he’s still actively throwing. When he returns, he’ll get his job back. However, in the short-term Romano is in line for saves. He’s recorded saves in Toronto’s last two opportunities and he can help out in most ratio categories. He touts a 0.64 ERA and a 0.50 WHIP and 12.86 K/9. He’s been Toronto’s best reliever and he’ll help out with more than just saves.

Jonathan Schoop (DET – 2B) Schoop largely went undrafted in most fantasy baseball leagues, likely due to the less-than-stellar lineup the Tigers boast. But he has six home runs on the season and a .696 slugging percentage over the last week. As is always the case, he comes with the disclaimer that he strikes out far more than he walks so he may not be as sexy of a pickup in points leagues. But his production comes in bunches. He collects numerous multi-hit games and can usually launch a home run in these contests as well.

Ryan Mountcastle (BAL – 1B, 3B) Mountcastle has looked pretty strong in his MLB tenure. It’s a small sample size but it looks like he belongs and comments from the front office suggest that he’s here to stay. Plate discipline has been suspect with five strikeouts in four games, but he’s finding ways to get on base and his Fangraphs Prospect Report gave him a Raw/Power grade of 60 out of 70. The home runs haven’t come yet, but he has some doubles and he’s still producing. Once the power comes it’ll break the seal for more.

NFL DFS can be difficult yet rewarding in so many ways. Finding the right strategies for Cash games and GPP contests will help you build your bankroll in the upcoming season. Check out the latest NFK Draft Guide article DFS Strategies from James Grande and let us help you become a better DFS player! 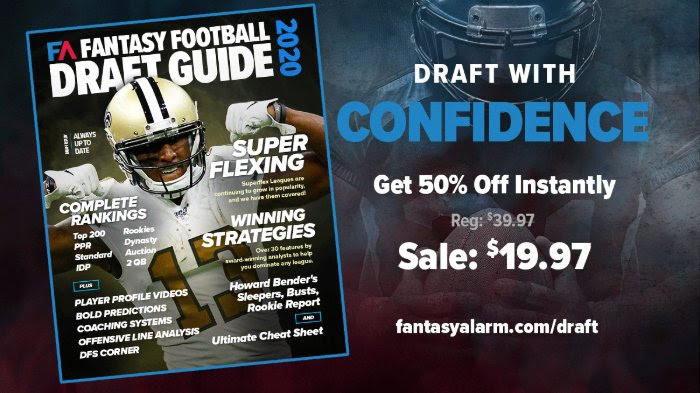