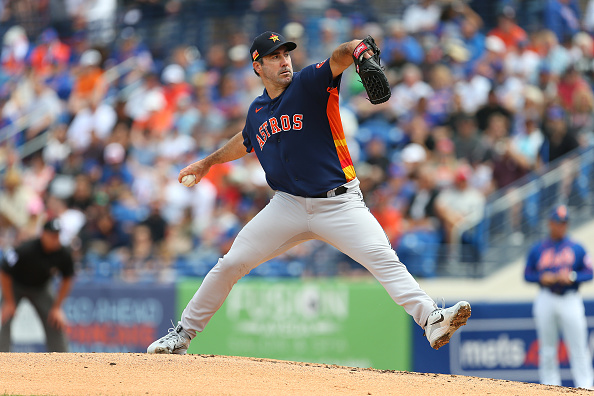 A flurry of MLB injuries has affected the average draft position of not only the afflicted players but those who may benefit from more playing time.  With Tout Wars, the NFBC NY Main Event, and many home leagues drafting this weekend, we need to stay updated on who the risers and fallers are on your draft boards.  If you use an outdated ADP, you may miss out on some rising players or you may draft someone earlier than necessary. For comparisons I am going to use this week’s Fantasy Alarm’s Mock Draft Army mock drafts and compare them to the overall MDA ADP, the NFBC ADP from 3/1 - 3/6 and from 3/7 - 3/11.

With the breaking news that the coronavirus outbreak will delay the start of the season, those risers and fallers that are caused by injuries may reverse their course if their injuries are expected to get better by the time the season resumes.  Each announcement may cause these players to move up or down the list depending upon what the decisions are.

Justin Verlander ’s lat strain has caused his ADP to fall significantly as he is expected to miss 6-8 weeks.  This time table would have him make his debut in late April or early May. What this chart doesn’t show is that his ADP from the same two days that the MDA mocks went on was 27.89.  He has gone from a late first, early second round pick to a third to fourth round pick. Now that the outbreak will delay the start of the season he may move back up to the early second round. What is expected to be seen, but which hasn’t really panned out yet, is that there will be some movement in the top pitchers moving up a little bit on people’s draft boards.  With some more data we may see Walker Buehler , Jack Flaherty , Stephen Strasburg and if he isn’t hurt, Max Scherzer , get taken earlier. As they move up you may see a ripple effect that moves the second and third tier pitchers move up also. Verlander’s injury also brought his teammates into light as we saw some significant ADP movement by Jose Urquidy and Josh James . James was in a battle for the fifth starter, but it seems clear now that he will break camp as a starter.  Both saw little movement in their MDA ADP but the drafters in the NFBC gave them both significant boosts with James rising 110 slots. He is someone you can miss out on if you don’t use a short time period on whatever ADP you may follow during your draft.
The Yankees injury bug was never eradicated from 2019 and has continued in 2020.  With Judge out with a stress fracture of his rib indefinitely (Igor Shesterkin of the NY Rangers was the starting goalie two weeks after breaking a rib in a car accident, just saying).  There has been a big drop in Judge’s ADP over the last week as his status is up in the air. Stanton’s has dropped but had already taken a hit beforehand. The beneficiary of their drops is Michael Tauchman.  He has had a 165 ADP rise over the last week. The Army has even moved him higher this week up to 264 from 292. Adam Frazier still hasn’t come up on the radar, but if it’s announced that he will break camp with the Yankees, which most assume he will, you should see a bounce in his stock.  Now with the potential delayed opening of the season do Judge and Stanton become less of a risk and move back up into the earlier rounds?
Montgomery was a long shot to make the Yankees rotation when spring training started. The injuries to Paxton and Severino put him in the mix. Now that he’s having a very good spring with 16 Ks in 11 innings, he’s jumping up everyone’s draft rankings. His only flaw has been he’s given up 4 homers over 11 innings. His WHIP is 0.73 and despite the four home runs he’s only given up five runs. He’s a buy now but will he remain in the rotation once Paxton and German return? If the season gets delayed, will his stock go down as Paxton may be much closer to returning?
Willie Calhoun started his breakout in 2019 and there are some who believe it would continue into 2020. Then along came a Julio Urías fastball to the jaw and all bets are off. His injury wasn’t too severe and he is expected to make a full recovery but there has been no word on long he’ll be sidelined. His MDA stock has plummeted like Wall Street’s recent decline going from 175 to 256 in its small sample size. In the NFBC he’s seen a 25 slot drop. Nick Solak is one of the expected players who could receive a boost in ADP with Calhoun’s injury and the Army drafted him about 3 rounds earlier. There was little change in his NFBC ADP.  Is this a wait and see for the NFBC players or do they not value Solack enough to bump him up?
Both Trey Mancini and Michael Conforto will miss the start of the season if it starts on time. Mancini’s ailment is still a mystery but we know it’s not baseball related. It’s not right to speculate what it is and Mancini himself said that he would update us when it’s the right time. I’m not sure if I would draft him now if you have other options but a late round flier on someone with dual position eligibility can give you a boost whenever he returns. I’m surprised he’s still being taken so early in the NFBC. You would expect a boost to the likes of Austin Hays and Anthony Santander but that hasn’t materialized most likely to the fact that they play for the Orioles and there are other players out there that are being chosen ahead of them.  As for Conforto, he was diagnosed with a Grade 1 oblique strain and we know these can linger for an extended period of time. It’s probably a four week injury putting his return in mid-April. Some have said that it would be JD Davis getting the boost, but I see it being Dom Smith who was going to be a bench player. The other possibility is that Jeff McNeil gets moved to right field, Davis to left field, and either Luis Guillorme or Eduardo Núñez take over at third. This is not expected to be a long term injury and you can see that Conforto isn’t being discounted much and will be even less with the opening day delay. None of the other Mets appear to be worth moving up your draft boards.

Depending upon what decisions are made, drafts over the weekend may be very different than they would be even today.  Follow the news and make sure you factor in all the available information before you have to make those critical choices on draft day.  Check the Fantasy Alarm Ultimate Cheat Sheet as it is updated daily for the latest information and rankings.