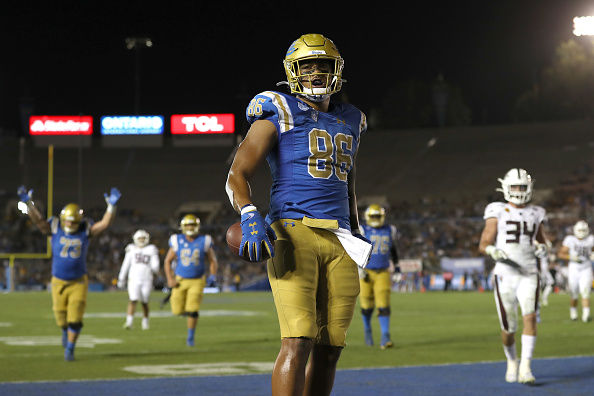 With the only live sports action right now limited to eSports, and the main live fantasy available being the CS:GO daily fantasy coverage of the legendary Sean Mitchell here at Fantasy Alarm, the NFL Draft hit us like an absolute truck last weekend.  It was a glorious break in this desolate sports landscape.  So, naturally we needed to cover the impact of the first round selections on incumbent tight ends for fantasy football last Friday.  Today we will touch on the rookie tight ends and next week we will address some more effects of the draft on incumbent tight ends in a similar fashion to last week’s article.  Then it’s back to grinding out deep dives in search of hidden gems at the tight end position.

Alright, on to the new stuff.  No rookies were drafted in the first round so let's discuss rookie tight ends in general and then get on to some advice.

People might not like to hear it but, for redraft purposes, the rookie tight ends have an uphill battle to relevancy.  There are essentially three types of tight ends, every down, pass catching, and blocking.  You can divide them further into inline tight ends, “move”/H-back tight ends, etc. but what matters most for immediate fantasy success is role.  Of the three, primary pass catching tight ends typically have the most fantasy success in their early years.  Even if he only played 41% of the snaps last year as a sophomore when Mark Andrews was out there, he was out there to catch the ball and he capitalized.  The same can be said with Evan Engram in his early years.  For fantasy in the short term, you want the guy who is going to be used as a pass catcher like Noah Fant, Irv Smith, and Dawson Knox .  You don’t want the Drew Sample who is just blocking.

With “every down” tight ends it is a complicated relationship.  In the long term in your dynasty leagues, you want the guys who will be out there every single snap. Players like the Kelces, the Kittles, the Ertzs.  Though pass-catching tight ends might see the immediate success, if they can’t be trusted to block, they can easily end up in a timeshare which limits them to a pass-catching only role.  Think of how the value trended down for guys like Eric Ebron , Cameron Brate , and even Jimmy Graham when they had to come off the field for half the snaps.  Look at how the perception has shifted on Rams tight ends.  Over the last couple years and up to the halfway point of last season, everyone would have said Gerald Everett was the more valuable fantasy asset because he was the pass catcher while Tyler Higbee was the blocker. When Everett injured his knee, Higbee had a mini breakout showing he could be an every down tight end, something we never saw from Everett.  We told you why you should pump the brakes on Higbee in an article a couple weeks ago, but the community at large is excited about him again.

The big problem with these every-down tight ends as rookies is you are essentially learning two jobs and gaining the trust of both protection and the offensive attack.  You might not realize it, but the complex blocking schemes of the NFL actually require more trust and understanding between the players than the relationship between a pass catcher and a quarterback.  A drop may ruin a drive, but you blow your assignment and the quarterback gets popped? That might ruin a season or even a career.

Depending on the composition of the rest of the tight end group, there is likely a guy on the team who is going to be better than the rookie in at least one of the two capacities and there is no reason for the team not to use him while they are there.  There is of course the rare occasion like we saw with TJ Hockenson where the rookie gets on the field right away in both facets of the game, but even he ceded snaps to the veteran Jesse James .  For Irv Smith and Dawson Knox , guys like Kyle Rudolph , Tyler Kroft , Lee Smith , and Tommy Sweeney were better blockers so they luckily got to contribute on the pass catching side.  With someone like Dallas Goedert , Zack Ertz being there has meant he is used primarily for his blocking skills and has just recently emerged as a threat in the pass game.  We already touched on Higbee with this same path.  For redraft leagues, this is what you need to focus on.  If the guy gets on the field, what will he be doing?

Redraft: Devin Asiasi, New England Patriots. This may come as a surprise to some with other seemingly better tight ends coming off the board, not to mention New England drafting two tight ends but I pretty much just typed all that stuff up before this to tell you why this is your best bet in redraft.  Opportunity.  The Patriots were atrocious in terms of pass catching tight ends last year, Ben Watson led the team with 17 catches.  Something needed to be done, so they drafted some tight ends.  You may look at Dalton Keene, but their trusted fullback James Develin announced his retirement after injuring his neck.  Bill Belicheck already specifically discussed Keene’s usage in college lining up in the backfield.  He talked about how the Patriots use more of a traditional fullback, and that Keene will have to learn the more “specific assignments, particularly in the passing game, learning how to block in close quarters”.  Does that sound like a guy you plan to have in a pass catching role?  Asiasi is your best bet to line up as an in-line or slot tight end and run routes, and he also has the benefit of a week tight end room so it appears he is your best bet to contribute in redraft leagues.  That said, I would not bank on any of these tight ends to be your starter and consider him more of a last round pick type of guy in redraft. 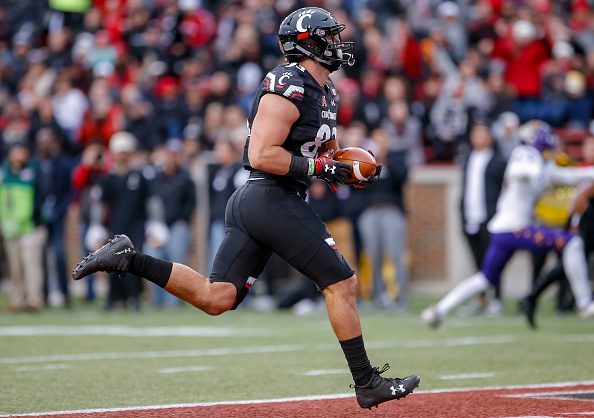 Redraft Watch List - Josiah Deguara, Philadelphia Eagles. With everything we just talked about, this one makes a lot of sense.  The Packers depth chart consists of Marcedes Lewis , a career blocking tight end, Jace Sternberger (who blocked on31.8% of his snaps last year, higher than Lewis’s 28.9% even), and Robert Tonyan (who blocked on 18.2% of his snaps as well).  Jimmy Graham who ran 447 routes and only blocked on 21 pass plays is gone.  Lewis ran 150, Tonyan ran 72, and Sternberger ran 15. Deguara is a serious athlete who starred in football, baseball, and basketball in high school (ooo basketball tight end, I know lame, but still).  He had a decent target share and had 38 catches for 468 yards and five touchdowns his sophomore year. He followed that with 39 catches for 504 yards and seven touchdowns his junior year.  Third round draft capital is nothing to scoff at so, given his profile and his path there’s no reason not to throw him on the watch list or add him in a super deep league and blow everyone’s mind if he does anything at all. If he’s out there playing both tight end and fullback while other guys handle the blocking duties, he has the upside of being a sneaky touchdown dependent asset like Taysom Hill .

Dynasty: Cole Kmet, Chicago Bears. We are giving the slight edge to Kmet here as he went to the Bears with Matt Nagy and we saw what Nagy was able to do with Travis Kelce in Kansas City.  However, Kmet is plagued by the main theme of this article.  Kmet went to the Bears who have Jimmy Graham , a notorious pass friendly and block aversive tight end.  People may think Graham is washed up.  I choose to recognize that he is one of the few players in league history to ever suffer the dreaded torn patellar tendon and soldier through to continue playing.  Plenty of younger guys in their prime like Jerod Mayo, Victor Cruz , Cadillac Williams, and David Boston couldn’t do it so kudos to Graham for battling.  Whether you personally think his washed or not, the Bears do not and they didn’t give Jimmy Graham a two year, $16 million contract to ride the pine.  And though he could be cut after this year if Kmet shows he’s game ready, we expect Kmet to spend most of the year learning the ins and outs of the blocking side of things while Graham factors more on the passing side.  Down the road, Kmet does profile as an everyday tight end and the Bears don’t really have anyone aside from Allen Robinson which is why he’s a good stash.  Just don’t expect him a Rob Gronkowsi type rookie season.

Dynasty: Adam Trautman, New Orleans Saints. Not much needs to be said about Adam Trautman that we didn’t just say about Kmet, just insert Jared Cook for Jimmy Graham .  Per PlayerProfiler.com, Trautman is best comparable to Dallas Goedert and we expect a similar career arc, though hopefully Cook will be gone sooner than Ertz. Cook technically has two years on his deal, but his 2021 year automatically voids after 2020.  Unfortunately, they also signed Emmanuel Sanders to a two year deal so, if Trautman is to be a top two target in this offense, he will likely need to wait a couple years until it’s just him Michael Thomas , and (possibly) Alvin Kamara battling for looks from (possibly) Jameis Winston .

Dynasty Watch List: Colby Parkinson, Seattle Seahawks. Do you need to draft him? Probably not unless your league is a two tight end league or super deep.  But this is the classic case of the Seahawks knowing they will need tight end help at some point, so they drafted two.  Greg Olsen is on his very last legs.  And who knows what Will Dissly will look like after injuring his Achilles.  They took two tight ends if that’s any indication.  Stephen Sullivan wasn’t drafted until pick 251 in the supplemental seventh round picks and he profiles as a blocking tight end so his presence is nothing to worry about. In fact, it’s encouraging if you imagine a team thinks “pass catcher vs. blocker”.  Colby Parkinson profiles as a pass catching tight end and Russell Wilson has proven he can make random tight ends relevant so, with decent fourth round draft capital, there is no reason not to take a flyer on Parkinson if you have the space in a deep one.

Statistics for this article were provided by the author, Andrew Cooper, with help from ProFootballFocus.com, PlayerProfiler.com, ProFootballRefence.com, and AirYards.com. Follow Andrew on Twitter @CoopAFiasco.