Adam Ronis gives his analysis and break down for Rams receiver Robert Woods for the 2020 Fantasy Football season. 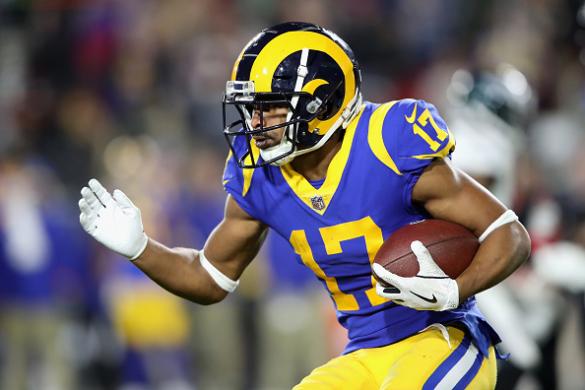 Some players get a label of being boring players. Many aim for a player with a high ceiling and the consistent players can get undervalued. Robert Woods fits this mold. He's not a sexy pick and based on his history, the likelihood of double-digit touchdowns is slim.

The Rams wide receiver has been a consistent wide receiver the last three seasons, yet he's falling further than he should in drafts. Woods was 13th in points per game in PPR formats last season and was 15th in 2018. Woods had these high finishes despite scoring seven total touchdowns in 2018 and three total last season. That does hurt Woods in non-PPR formats, but there's likely positive touchdown regression coming. Woods was the 19th WR in points per game in PPR formats in 2017 in 12 games in his first season with the Rams.

Woods had at least seven targets in 12 of 15 games last season and was second in yards after the catch.

He had six games of double-digit targets and had at least 15 points in PPR formats in six of seven games. The Rams had a shift in offensive philosophy last season, going from 11-personnel to more 12-personnel in the second half to help offset the offensive line problems. The Rams used 11-personnel 73 percent of the time in 2019 and it dropped to 67 percent after their bye week. The Rams used 12-personnel 30 percent of the time after the bye. Woods benefited from the move. He averaged 11.4 targets in the second half of the season. From Weeks 10-17, Woods had 52 receptions, which was second in the NFL. He was fourth in the NFL with 663 receiving yards.

There's no reason Woods shouldn't see 130 targets again. The Rams have 121 vacated targets with the departures of Todd Gurley and Brandin Cooks . Woods could score more touchdowns if the Rams throw more near the goal line considering Gurley scored 14 total touchdowns and there's questions if the backfield can produce that touchdown total again.

The receptions and yards will keep the floor high for Woods. The touchdowns will determine how good Woods will be and if he can ascend to a WR1 for fantasy. The expectations have to be low for touchdowns, but he showed two years ago with a total of seven touchdowns he could finish as a WR1.

The Rams don't throw to Woods much in the red zone. Last season, tight end Tyler Higbee led the Rams with 19 red zone targets and he didn't even get heavily involved in the offense until Week 12. Cooper Kupp had 18 red zone targets, Woods had nine and Gerald Everett eight.

Since June 1, Woods has an Average Draft Position (ADP) of 65.68 and is drafted on average as the 18th wide receiver in bestball10s. Woods is falling later in some drafts and I have seen him go in round five of many drafts. While wide receiver is deep in that range and there are a bevy of good receivers to select in that range, Woods is undervalued.

NFL Glazer: Edwards-Helaire will be active vs. Bills

NFL Watson wants out HOU regardless of who new HC is

NFL Mahomes diagnosed with turf toe in his left foot

L. Bell - RB
KC1
Le'Veon Bell (knee) is inactive for the AFC Championship Game against the Bills.
With Clyde Edwards-Helaire (hip, ankle) returning, Bell wasn't going to be a part of the game plan, anyways. In his absence, Darrel Williams will split snaps and touches with CEH.
Added 5:20 pm (EST)
Added 5:20 pm (EST)

G. Davis - WR
BUF1
Bills WR Gabriel Davis (ankle) is active for the AFC Championship Game against the Chiefs.
As is DT Vernon Butler, the Bills' only other questionable player. Big-play threat Davis should get some opportunities down the sideline, but his snaps figure to be limited after he barely practiced during the week. Inactive for the Bills are QB Jake Fromm, LB Tyrel Dodson, OL Jordan Devey, TE Tyler Kroft, DE Trent Murphy, CB Dane Jackson and WR Kenny Stills.
Added 5:15 pm (EST)
Added 5:15 pm (EST)

S. Watkins - WR
KC1
Sammy Watkins (calf) is inactive for the AFC Championship Game against the Bills.
Watkins hasn't played since Week 16. His absence opposite Tyreek Hill was felt in the Divisional Round. With Bell out, Darrel Williams and a returning Clyde Edwards-Helaire will split work in the Chiefs' backfield. Joining Watkins and Bell on the shelf are OL Yasir Durant, DE Tim Ward, DT Khalen Saunders, CB BoPete Keyes and LB Willie Gay.
Added 5:13 pm (EST)
Added 5:13 pm (EST)

P. Mahomes - QB
KC1
FOX's Jay Glazer reports Patrick Mahomes (toe) has been fitted with a "special orthotic" for the AFC Championship Game against the Bills.
Per Glazer, the Chiefs are "very concerned," and Mahomes could require offseason surgery. Glazer confirms the toe was a bigger issue during practice this week than Mahomes' concussion, which apparently wasn't actually a concussion. Scrambling for first downs like mad in 2020, Mahomes' foot could loom large as the Chiefs look to repeat as AFC champions.
Added 2:53 pm (EST)
Added 2:53 pm (EST)

C. Edwards-Helaire - RB
KC1
Clyde Edwards-Helaire (ankle, hip) will be active for the AFC Championship Game against the Bills.
The report comes via FOX's Jay Glazer. It will be CEH's first appearance since Week 15. With Le'Veon Bell (knee) looking doubtful, Chiefs backfield work will fall to CEH and Darrel Williams. It has been Williams who has taken the lead in CEH's absence, and it will probably remain Williams between the tackles against the Bills. CEH's touches are extremely difficult to project following the long layoff, but he will not lack for DFS upside in a game with a 54.5 over/under.
Added 2:48 pm (EST)
Added 2:48 pm (EST)

G. Olsen - TE
SEA1
Greg Olsen is retiring after 14 seasons in the NFL.
35-year-old Olsen announced his retirement on FOX's NFC Championship Game pre-game show, and confirmed he will begin working for the network in 2021. The No. 31 overall pick of the 2007 Draft, Olsen was inconsistent his first few years in the league under Bears OCs Ron Turner and Mike Martz. A 2011 trade to Carolina and Cam Newton immediately turned him into an All-Pro-type player, one who made three Pro Bowls and caught a whopping 742 career passes. That total is fifth all time amongst tight ends. It would have been much higher if not for a spate of late-career foot issues, injuries that limited him to 41 games over the past four years. That, of course, is the nature of football. Olsen will probably end up on the outside looking in of the Hall-of-Fame, but he should at least generate some discussion.
Added 2:22 pm (EST)
Added 2:22 pm (EST)

D. Watson - QB
HOU1
ESPN's Chris Mortensen reports Texans QB Deshaun Watson's thinking "is not expected to change" based on who Houston hires as their next head coach.
Watson has made his grievances with the organization known and an attempt to placate him with a specific head coach is apparently off the table. A Watson trade is looking increasingly likely by the day. The Jets are reportedly his preferred landing spot with Miami coming in second. Both teams have a young quarterback who could be moved plus a bevy of first-round draft picks. Watson thinks highly of New York's new head coach, Robert Saleh, and wants to play under him for Gang Green. Watson's presence would be a massive upgrade for the New York fantasy options. However, the lack of talent at receiver and tight end does make the landing spot less desirable for Watson's fantasy outlook.
Added 12:52 pm (EST)
Added 12:52 pm (EST)