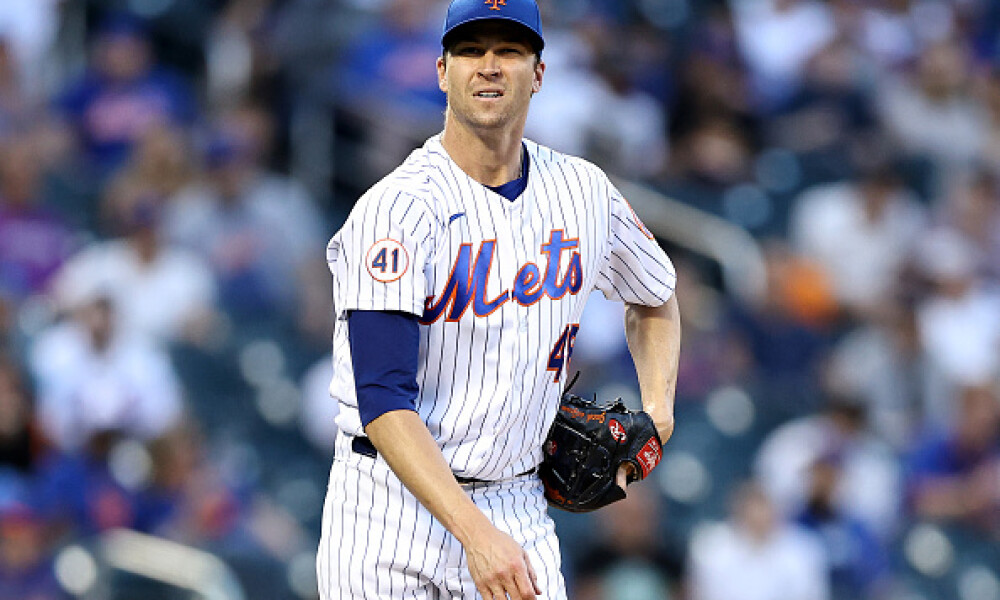 Another Injury Scare for deGrom

All eyes were on Jacob deGrom on Wednesday night after leaving his previous start with right flexor tendonditis. It looked great early on as deGrom threw three perfect innings and struck out eight of the nine batters faced to lower his ERA to 0.54. He even drove in his sixth run of the season in the second inning with a single. But deGrom left after three innings due to right shoulder soreness. He is expected to get an MRI. The Mets did a series of strength tests and don't think it's a serious injury.

Alcantara Gets No Run Support

Sandy Alcantara has pitched excellent this season, but only has four wins due to lack of run support from the Marlins. Alcantara went the distance, allowing a walk-off single in the ninth inning to lose 1-0 to the Cardinals. He went 8.1 innings and allowed six hits, no earned runs, walked one and struck out seven. Alcantara has a 3.09 ERA and 1.06 WHIP.

It's a Bad Smell

Blake Snell showed some promise in his two starts against the Mets by pitching 11 innings and allowing six hits, three earned runs, four walks and and striking out 14. Turns out it didn't mean much. Snell was back to the disappointing pitcher that has crushed fantasy players this season. He lasted 3.1 innings against the Rockies at Coors Field and allowed nine hits, seven earned runs, walked two, struck out one and allowed two home runs. He has a 5.72 ERA.

Tyler Mahle was dominant in a win over the Brewers, tying a career high with 12 strikeouts. He allowed three hits, one run and walked two and is 7-2 with a 3.39 ERA and 1.09 WHIP. He had 19 swinging strikes. Lucas Sims closed it out for his seventh save.

Fernando Tatis Jr. had another big day, going 2-for-4 with two runs, a home run and two RBIs. It was his fourth homer in five games and he has 21 home runs and 48 RBI. He's pretty, pretty, pretty good.

Jose Altuve dropped in drafts after a poor regular season last year and the cheating scandal from two seasons ago might have been on the minds of some. He's proving people wrong. Altuve went 2-for-4 with two home runs last night and has 15 home runs and 36 RBI and is slashing .294/.363/.511.

Alex Bregman left Wednesday's game with a quad injury. He pulled up while running to first base on a double-play ball. Jean Segura was placed on the 10-day injured list with a Grade 1 groin strain. He is expected to miss three weeks. Royals pitcher Brady Singer left his start after three innings with right shoulder tightness. The Astros placed Kyle Tucker on the COVID-19 list. No other details were revealed. The Braves placed Tucker Davidson on the 10-day injured list with a left forearm strain. Mike Moustakas was pulled off his rehab assignment due to renewed soreness in his heel. Josh Donaldson left Wednesday's game with tightness in his right calf and Andrelton Simmons left with ankle tightness.

Fulmer Back To Closing

The Tigers activated Michael Fulmer from the injured list on Monday and he pitched a scoreless inning. Fulmer was asked to get the final three outs with the Tigers leading 6-3 on Wednesday. Fulmer got the save, but he allowed three hits and two runs. It was his fifth save of the season.

Here's what's on tap for Thursday in Major League Baseball!

At least it's not all gloom and doom with injuries. Zac Gallen will be activated from the injured list and start on Thursday for the Diamondbacks against the Giants. He has been out since early May with a strained right elbow after starting the season on the IL with a stress fracture in his right arm. He threw a simulated game on Saturday, but only threw 36 pitches. Don't expect him to go deep into the game as the Diamondbacks attempt to avoid their 23rd consecutive loss on the road. The Giants will start Kevin Gausman, who is 7-1 with a 1.43 ERA.

The Angels are the biggest favorites of the day at -213. Shohei Ohtani will pitcher after homering and stealing a base on Wednesday. Ohtani takes on the Tigers and Matt Manning, who will make his major league debut. Ohtani went five innings in his last start against the Diamondbacks and allowed five hits, two runs, two walks and struck out eight. He has a 2.85 ERA with a 68:28 K:BB ratio in 47.1 innings. Manning was the ninth overall pick of the 2016 draft. Manning had an 8.07 ERA and 1.55 WHIP in 32.1 innings with a 36:10 K:BB ratio at Triple-A and has allowed 11 home runs.

After getting swept in Cincinnati in a three-game series, the Brewers go to Coors Field after scoring four runs in the series. The Brewers are -157 favorites with Brandon Woodruff on the mound. He has allowed two earned runs or fewer in all 13 starts. He is 5-2 with a 1.52 ERA, 0.72 WHIP, 31.5 percent strikeout rate and 5.5 percent walk rate.