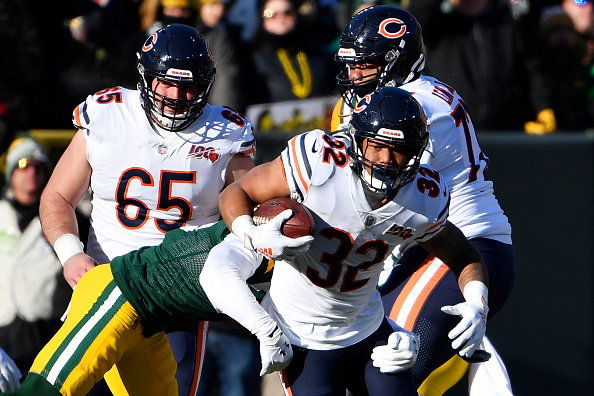 We are now less than two weeks away from the start of the NFL season and fantasy drafts are going hot and heavy right now.  Of course, there are a lot of questions and concerns about whether the season will be able to played normally given the COVID-19 pandemic.  However, fantasy GMs should proceed with drafts and operate normally until we are told otherwise.  Since there are no preseason games, we are simply left with reports coming out of practices and training camps as to players’ health and injury status.  As expected, players are dealing with a variety of injuries which could impact GMs’ draft strategies.  So, without any further adieu, let’s take a look at some of the walking wounded in the fantasy football emergency room.

Kittle remains one of the top fantasy tight ends coming off a season in which he caught 85 passes for 1,053 yards and five touchdowns in 14 games.  He has not been as much of a scoring option as fantasy GMs would like, but that could change this year due to all of the injuries to San Francisco’s wide receivers.  Currently, Kittle is dealing with some tightness in his hamstring and has been limited in practice.  It does not appear to be anything serious, so he is expected to be fully healthy for Week 1.  Fantasy GMs should continue to draft him as one of the top tight ends in the league and hope that he finds the end zone more frequently this year.

Bears running back David Montgomery had an inconsistent rookie season due in part to Matt Nagy’s stubbornness as well as the team’s overall offensive struggles.  He did rush for 889 yards and six touchdowns and also had 25 receptions for 185 yards and one touchdown, so the talent is clearly there.  However, he is now expected to miss two to four weeks after suffering a non-contact knee injury in practice this week.  Montgomery was carted off the field so fantasy GMs understandably had major concerns.  His status for Week 1 is in serious jeopardy, so the Bears will have to turn to the likes of Tarik Cohen , Cordarrelle Patterson , or bring in a free agent to add some depth.

The Bills made a big splash during the offseason when they acquired Stefon Diggs from Minnesota to serve as their premier wide receiver.  The hope is that Diggs will open things up for Josh Allen and allow them to establish more downfield presence with their aerial attack.  He missed practice on Thursday due to some soreness in his back and is considered day-to-day right now.  There is no concern at the moment for his availability for Week 1, so fantasy GMs should continue drafting him accordingly as more of a WR2 or WR3.  Buffalo’s passing attack has to establish itself before we can elevate Diggs back to where he was in the Vikings’ offense.  Plus, Diggs has a lengthy injury history so GMs also need to be able to trust that he can stay on the field for 16 games for the first time in his career.

Mixon has been a polarizing fantasy player ever since he made his professional debut with the Bengals a few years ago.  He has a ton of talent, but he has yet to really establish himself as a top running back due to injuries, attitude and a poor offense around him.  He has been limited in practice this week due to migraine headaches, but there are rumblings that it could be a deeper issue such a contract dispute.  The rumors about a possible holdout have been hovering for months, so fantasy GMs need to consider that before drafting him at his average draft position.

The Eagles will have to make a decision by late next week whether to activate Jeffery from the PUP list or else he will miss the first six weeks of the season.  He continues to try and work his way back from foot surgery, but it is highly unlikely he will be ready to play in Week 1.  At 30-years old, Jeffery is a major injury risk having missed several games over the past few years.  He developed a great rapport with Carson Wentz upon arriving in Philadelphia, but he cannot be trusted to stay on the field in order for GMs to reap the benefits.  This is a conundrum for leagues drafting early next week since we may not know his PUP status.  All things being equal, he should be considered in later rounds as a WR3 or Flex simply because we know he will not be playing in all 16 games.

The Cardinals were so pleased with Drake’s performance after they acquired him in 2019 that they shipped incumbent David Johnson to the Texans in a trade for DeAndre Hopkins .  Drake ran for 817 yards and eight touchdowns last year and is now firmly entrenched as Arizona’s starting running back.  He is currently dealing with a foot injury and missed practice earlier this week.  He has indicated it is not a major issue and is one he has dealt with in the past.  At this point, we should fully expect Drake to be on the field for Week 1 against the 49ers.  Chase Edmonds is his handcuff so GMs can consider drafting him in later rounds for depth.

Chargers wide receiver Mike Williams suffered a sprained shoulder and is expected to miss two to four weeks.  This puts his availability for Week 1 in serious jeopardy.  Head Coach Anthony Lynn is also skeptical about Williams’ status for the regular season as he was quite vague in his estimate of how long he might be sidelined.  Williams is entering his fourth pro season and has been trending upwards since being a first round pick in 2017.  He is coming off a season in which he had 49 catches for 1,001 yards and two touchdowns.  However, his fantasy stock will likely take a hit with Philip Rivers now in Indianapolis.  Williams is nothing more than a WR3 or Flex option in most standard leagues.

Campbell played in only seven games during his rookie season in 2019 thanks to a myriad of injuries including a sports hernia, strained hamstring, and fractures to both his hand and foot.  He is expected to emerge as a viable fantasy option this year with Philp Rivers now under center for the Colts.  Unfortunately, Campbell is now in the league’s concussion protocol after he was in a vehicle accident earlier this week.  Fantasy GMs should rightly be cautious with Campbell due to his already-lengthy injury history.  However, he could be a sleeper this year as the Colts number two wide receiver with an established veteran presence at quarterback.

Injury problems can really cut into a player's consistency. Consistency can be the key to a successful fantasy football season. Take a look at our Seasonal Strategies feature from the 2020 NFL Draft Guide: The Value of Consistency as he helps you identify the types of players that give you steady performance from week to week to counteract some of your more volatile players.