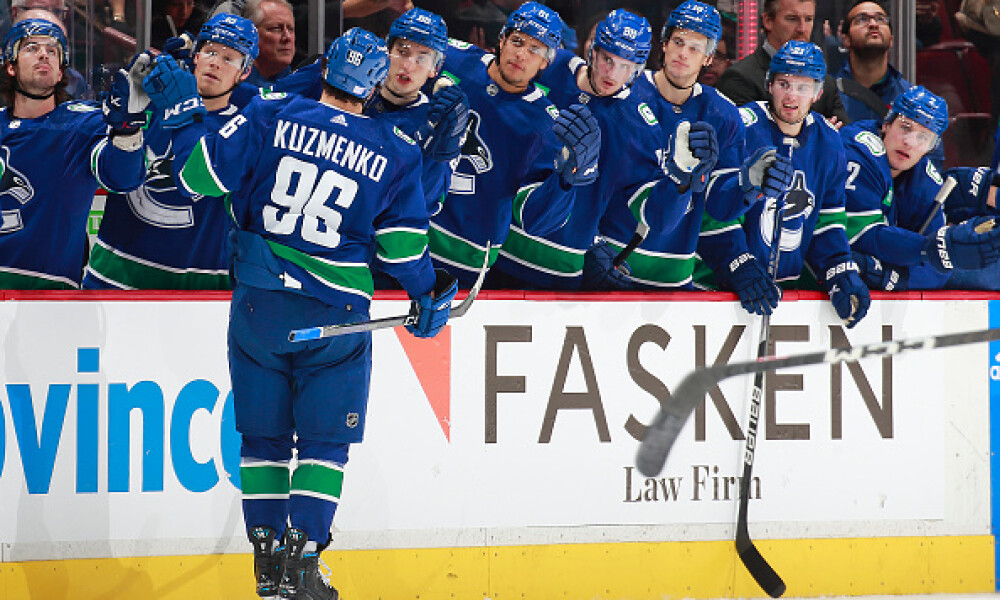 Welcome to another edition of the Fantasy Hockey Waiver Wire Report. The only way to win a championship in any fantasy league is to be active on the waiver wire. If you aren’t checking the wire at least once a week, then you’re doing it wrong. Each week, we’ll look at some players that are trending up the fantasy hockey rankings and who you should be adding to your watch list. For fantasy hockey Week 4, Vancouver Canucks forward Andrei Kuzmenko is among the top risers in rankings and NHL projections. Be sure to check out the NHL injury report, our NHL daily projections, and all of our NHL seasonal tools before making roster moves or setting those fantasy hockey lineups. Let’s take a look at this week's top fantasy hockey waiver wire pickups.

The Vancouver Canucks are a mess of a hockey team, but that hasn’t slowed down Andrei Kuzmenko. The rookie has seven goals in 12 games this season and has found a home on the second line. The 26-year-old was pretty good the last few seasons in the KHL and he seems to be adjusting to life in North America pretty well. He’s currently on pace to score 35 goals this season, which isn’t too bad. He’s a player I’d look to add immediately to my team.

The Florida Panthers are not the same team they were last season, but Carter Verhaeghe is out here reminding everyone that he can be an above-average player in this league. He has six goals in the last five games and is shooting the puck a ton. He’s also seeing over 20-minutes of ice time per game in the last three, and while that number will come down at some point, for now, he’s getting every opportunity to contribute and make an impact. He could be a long-term fantasy option for a team desperate for some scoring.

Most people believed that Kirby Dach was coming to Montreal to play down the middle on the second line, but the kid has found himself playing on the top line with Cole Caufield and Nick Suzuki, and so far, that experiment has gone well. Dach has seven points in the last four games and is seeing a decent amount of ice time. His shot volume is low and he doesn’t really hit or block shots, but he’s a big kid who can pass the puck and score goals, and for fantasy purposes, that’s a good thing. He could push 55-plus points this season if he continues to skate on that top line.

We spoke about Erik Kallgren a few weeks ago, but he’s still only 32% owned in Yahoo! leagues, so we still have time to jump on board the train before it leaves the station. With Matt Murray and Ilya Samsonov both on IR, Kallgren is going to be the starting goalie moving forward. He should be able to hold down the fort for the new couple of weeks.

With Seth Jones out of the lineup for a few weeks, his brother Caleb is stepping up and picking up some of the workload. He has six points in the last seven games and is pretty good at blocking shots. The points are a bonus because he has no offensive game, but he’s doing enough to merit being on a fantasy team in the short term. He can be added in deeper formats.