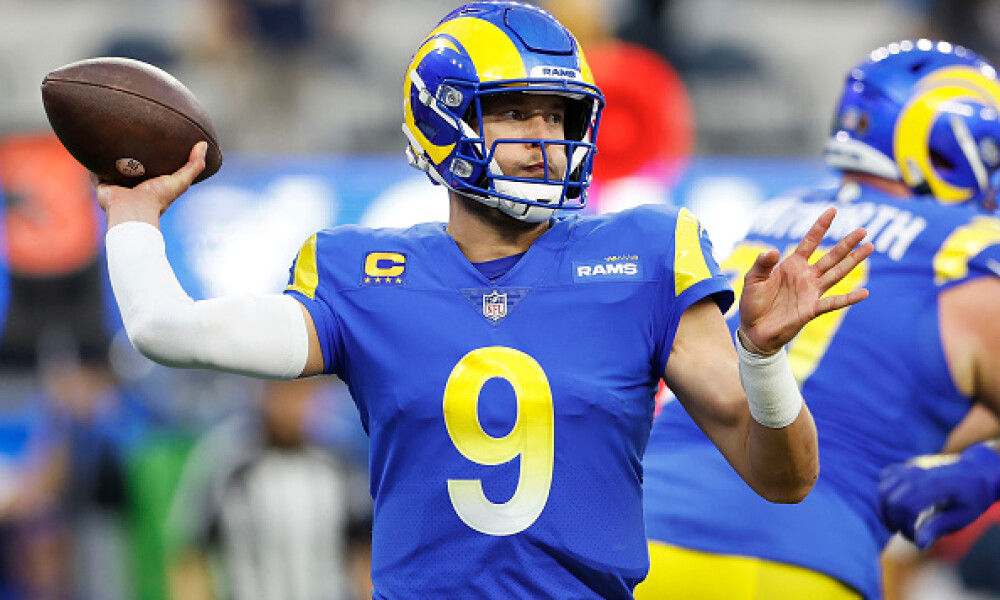 It is finally the week of Super Bowl 56 and we have the Los Angeles Rams facing off against the Cincinnati Bengals. From an NFL DFS and fantasy football perspective, there are plenty of key matchups to focus on. With this being the quarterback coach, though, let’s examine the matchups for Matthew Stafford and Joe Burrow and identify which you should be building your DraftKings, FanDuel, and Yahoo DFS lineups around this weekend!

Talk about a trade paying instant dividends, huh? The Rams acquired Stafford this offseason from the Lions in a deal that sent Jared Goff, two first-round picks, and a third-round pick to Detroit. Stafford completed 67.2% of his passes for 4,886 yards, 41 touchdowns, and 17 interceptions during the regular season and has continued that success into the playoffs. During the postseason, he's thrown for 905 yards, six touchdowns, and one interception while adding two rushing touchdowns as well.

The Rams offense ranked seventh in pass DVOA this season, which should be no surprise seeing as they had the league's receiving leader in Cooper Kupp – who finished the year with 145 receptions for 1,947 yards and 16 touchdowns. Kupp has had a fantastic postseason as well, totaling 25 receptions for 386 yards and four touchdowns. This is the key combo when choosing Stafford as your quarterback for DFS lineups this weekend.  Of the 14 teams that were in the playoffs, the Bengals' defense pass DVOA ranking is just eighth – and they weren’t very good during the regular season either, ranking 24th.

Even if the Bengals do decide to blanket cover Kupp, the Rams made another in-season splash by acquiring Odell Beckham Jr. OBJ appeared in eight games with the Rams and finished with 27 receptions for 305 yards and five touchdowns. During the postseason, OBJ has 19 catches for 236 yards and a score over the three games. In addition to OBJ, there is also Van Jefferson for the Bengals to worry about as well. While Jefferson hasn’t made much of an impact of late, he is still a deep threat that had some good games during the regular season.

Stafford is the more expensive quarterback in DFS contests for a reason and, at least to me, he is well worth the spend-up.

The second-year quarterback had a great regular season, completing 70.4% of his passes for 4,611 yards, 34 touchdowns, and 11 interceptions. He finished the season on a tear, throwing for nearly 1,500 yards with 11 touchdowns and zero interceptions over the final four games as he led the Bengals to the AFC North division title.

The playoffs have been a bit of a mixed bag for Burrow. Through three games, he has completed 68.8% of his passes for 842 yards, four touchdowns, and two interceptions. He led a big comeback in the AFC Championship game over the Chiefs after really struggling during the first half of that contest. In the Divisional matchup against the Titans, he was sacked nine times while managing to throw for 348 yards.

His matchup this weekend will be one of the toughest he has faced all season, with the Rams' defense ranking sixth in DVOA against the pass during the regular season and second in DVOA against the pass during the playoffs. The Rams finished third in the NFL in both interceptions and sacks this season. Los Angeles acquired Von Miller from the Broncos at the deadline to add to their star-studded defense led by Aaron Donald and Jalen Ramsey.

So, is Burrow worth the start this week? I don’t see him being a core play for me. The Bengals allowed the third-most sacks in the NFL this season and I worry about the ability to keep Burrow upright during this matchup against such an elite defense. Sure, there is plenty of skill-position talent on the offensive side of the football with the likes of all-rookie Ja’Marr Chase, Tee Higgins, Tyler Boyd, and Joe Mixon. But Burrow needs to have time in the pocket to allow those guys to get open and – after seeing him get sacked nine times against the Titans – I do worry about that happening here. Burrow is fine if you are making multiple lineups and looking to be contrarian. Again there are only two options here, but Stafford seems like the much safer pick here given the matchup.