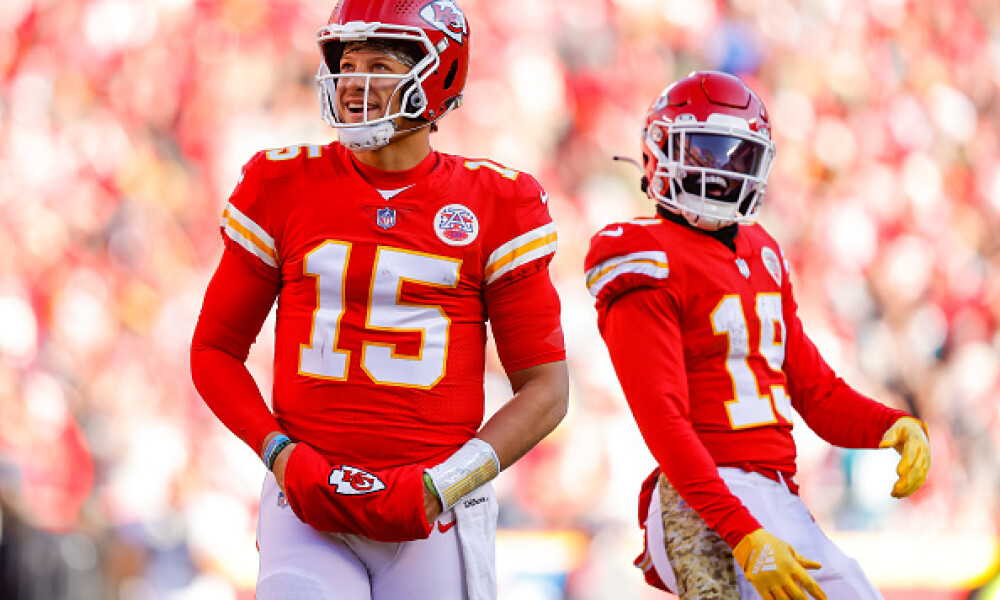 Good afternoon, Family! Are you ready for some Sunday Night Football? What better way to end your week than an NFL DFS Showdown on DraftKings and FanDuel? We have a good one tonight with an AFC West battle between the first place Kansas City Chiefs (7-2) and the second place Los Angeles Chargers (5-4). This could be an exciting matchup as the Chiefs hit the road in a 52.5-point total game against a potent Chargers offense that is finally getting healthy. Patrick Mahomes and Travis Kelce will be in primetime for the third consecutive game between these two rivals and the stakes are high for Justin Herbert and his offense as the Chiefs could have a three-game lead on the Chargers in the divisional standings with a win tonight. There is a full rundown of players and suggestions below and you can always take a look at our Weekly Match-Up Report and use NFL DFS Tools like our DFS Lineup Generator (a.k.a. the DFS lineup optimizer).

First, from the words of our fearless leader at Fantasy Alarm, Howard Bender:
Now before we begin, for those who are new to the process, please take a moment to understand what exactly you are getting yourself into by playing single-game Showdown Slates. We love to have some skin in the game, for sure, but these slates are, for all intents and purposes, a lottery ticket. Sure, there are times when the chalk hits, and everyone shares in the prizes, but, often, you need to hit on that random dart throw that differentiates your lineup from that of the herd in order to claim the top prize. As a result, we encourage you to play responsibly and not over-invest. Stick to the GPP contests (single-entry preferred), don’t blow your whole bankroll, and understand that, unless you are a max-entry player, you should prioritize having fun.
OK, now let’s get to tonight’s action.

Does it get any better for Mahomes? Five-point favorite in a game with a 52.5 total on primetime? Be ready for vintage Mahomes tonight even without JuJu Smith-Schuster (concussion) and Mercole Hardman (abdomen). He can make anyone into a good receiver especially against a mediocre Chargers defense as he once again leads the league with 326.2 passing yards per game and 25 TDs.

Big time bounce back spot for Ekeler tonight who ran for 451 yards plus has caught 67 passes for 420 receiving yards and 10 total scores. The Chiefs can get exposed by running backs and Ekeler will be involved all game due to his running ability as well as being the team’s pass-catching back. His passing game role will take a dip tonight with Keenan Allen and Mike Williams back, but he is still a solid choice even at his normal 5-8 targets per game.

We should see the Mahomes/Kelce connection on full display tonight especially with the absence of Smith-Schuster and Hardman. Kelce leads the team in target share (24.1%) and will be the only receiver that Mahomes completely trusts. Just take one look at that 17-target game two weeks ago against the Titans and we know what kind of ceiling that Kelce brings to the slate.

This is pass-funneling Chiefs defense will be making Herbert drop back and that’s good news because he gets his boys back tonight- Allen and Williams. This looks like the first game since Week 1 that he will have his top receivers in the lineup and one look at his numbers for that game- 279 yards and three touchdowns- give Herbert a big bump up tonight. He has thrown for 1,464 passing yards and 13 touchdowns to just three interceptions in five games against the Chiefs in his career and this will be another game that he will have to pass to keep up.  Herbert is contrarian FanDuel MVP t the popular Mahomes.

Butker is finally healthy and at $4.2K on DK makes for a fine cash play. The veteran will always put-up points as the Chiefs are a constant red zone presence and with a 29.0 team total the kicker will be involved.

MVS is the “boom or bust” poster boy. He has three decent games and then two bad games where he totaled one catch for 12 yards. He is a home run hitter, though, as his 17.0 yards per reception is seventh-best in the NFL. MVS only has 12 targets in his last four games, but this game could shoot out and he will see opportunity with the injuries in the Chiefs receiving room.
Note: MVS missed practice this week due to illness but is expected to play.

Is this the game that the Toney gets unleashed?  I would expect a near full-time role tonight and is now by far the most talented wide receiver on the roster. Priced at just $8K DK Toney caught four of his five passes last week for 57 yards and a touchdown and added 33 yards on the ground on two carries. With Smith-Schuster and Hardman out and Valdes-Scantling not 100% we should see A LOT of Kelce and Toney as Mahomes’ top targets tonight.

Pacheco has usurped Clyde Edward-Helaire as the leader of the Chiefs backfield. He saw 16 carries last week but the Chiefs dominated all game, and we should expect to see double digit carries tonight. The Chargers are one of the worst teams in the NFL at stopping the run, so Pacheco should have room to work, and he is the clear lead back on early downs.

With Smith-Schuster and Hardman out Watson will see action as WR3 and becomes a nice DraftKings Cash play at only $1.4K DK. The Charger play a lot of man coverage and Watson leads the Chiefs with 2.43 yards per route versus man (per Action Network). After Smith-Schuster and Hardman exited in Week 10, Watson ran a route on 73% of Mahomes’ dropbacks so lock him in your Cash lineups.

This play is contingent on Greg Everett’s status. McKitty, who saw six targets after Everett went down last week, should see the bulk of the passing routes at only $2.2K DK.  If Everett is indeed out McKitty will be on the field for almost every snap for one of the pass-heaviest offenses in the NFL.

We have another usurper here as Spiller has out-snapped Sony Michel 23-19 over the past two weeks while handling 11 touches to Michel’s two to become Austin Ekeler’s backup. Ekeler will see a lot of work tonight, but his backups tend to be involved so Spiller could see around 5-8 touches which could be good enough to allow you a way to get three expensive big dogs.
In Week 2 game between these two teams Chargers backup running backs combined for 10 touches and 44 yards.

Josh Palmer/DeAndre Carter, Los Angeles Chargers WRs- Fliers only for GPPs and only in play if Williams or Allen suffer injury setbacks