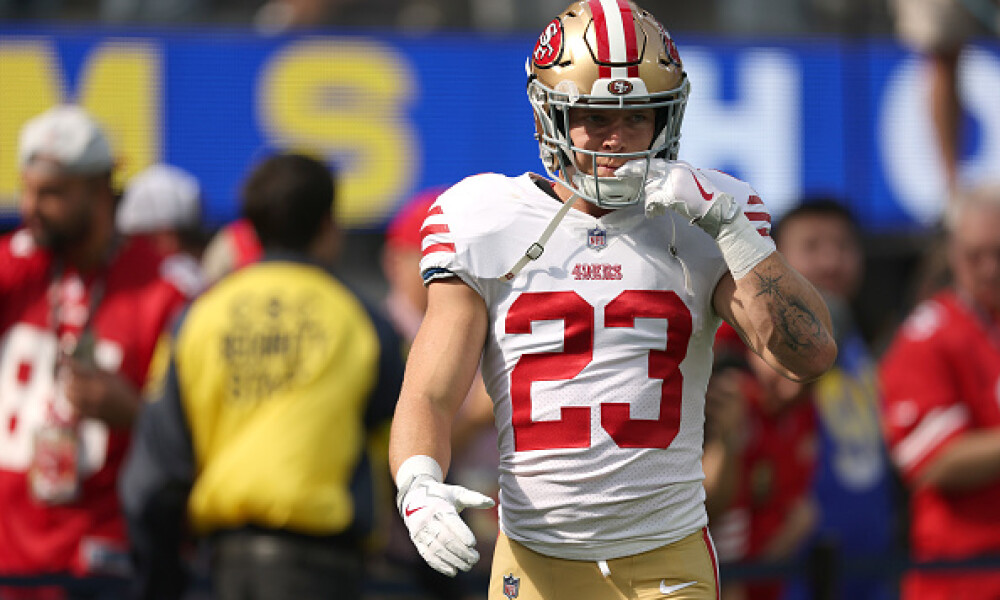 We’ve got one more bite of the NFL Week 11 DFS apple as the Arizona Cardinals play host to the San Francisco 49ers for a classic NFC West battle on Monday Night Football in Mexico City. It may be a bit tricky building your DFS Showdown lineups for this game as reports list Cardinals quarterback Kyler Murray as a true game-time decision which means we aren’t 100-percent sure as to how everything will line up should Colt McCoy be under center. If you are a multi-lineup player, it shouldn’t be too much of a problem as you can raise or lower your exposure to certain players, but if you are a one-lineup player, you should probably grab a placeholder for your contests, build a few different lineups according to the news you currently have and be able to pivot once the team makes their announcement during pre-game warm-ups. It’s not ideal, but then again, this was the way Week 11 went for most people anyway.

Weather: Scattered thunderstorms with temperatures in the mid-60s; wind blowing N at 8-10 mph

McCaffrey is a pretty obvious choice for the top spot in your lineup as there are numerous things working in his favor. The Cardinals may only allow an average of 110.5 rushing yards per game, but they’ve allowed 12 rushing touchdowns on the year. In addition to that, Arizona ranks 30th in DVOA against running back pass-plays and allow the 12th-most fantasy points per game to the running back position.

While most lean on the 49ers ground game, you don’t want to sleep on Kittle as the Cardinals rank 31st in DVOA against the tight end and also allow the most fantasy points per game to the position. Heading into the Week 9 bye, Kittle had back-to-back games with a touchdown so while he only saw two targets last week, he should be more actively involved this week.

There aren’t many ways to attack the 49ers defense, so if you’re looking to go contrarian with your top spot, Murray or McCoy, whichever guy gets the start, would be the way to go. San Francisco is allowing fewer than 200 passing yards per game, but we expect the Cardinals to be playing from behind and forced into throwing even more heavily than they already do. Also, with the 49ers pass-rush as strong as it is, Murray (and to an extent, McCoy) should be able to pick up some rushing yards to add his totals.

We’ve seen a bit of a shift in the targets pecking order and it’s not just about McCaffrey coming in and taking away touches and targets. Over the last four games, Aiyuk has paced the receivers with 35 targets which he’s turned into an average of seven catches for 82 yards per game with three touchdowns. He gets moved around a lot, but we should see him opposite Trayvon Mullen most of the time and that’s a favorable one, for sure.

Plain and simple, if Hopkins is playing, you’re going to want to get him into your lineups. He is the target leader when he is on the field and the game plan is to force-feed him as often as possible. Yes, the hamstring issue is a bit concerning, so keep an eye out for any late-breaking news regarding his status for the game. If there are no restrictions, we’re fine. If we find out he’s on any sort of a snap count, we’re out.

While we may not know who is quarterbacking the Cardinals until closer to game time, we can at least take solace in knowing that, if Hopkins is at less than 100-percent, Moore is going to see a significant target share in this game. The 49ers defense is strong, but they do struggle against slot receivers, ranking 31st in DVOA against them this season. Moore has seen 31 targets over his last three games which shows you that, no matter who is under center, he’s getting the work.

Funny as it seems, rostering Samuel is probably considered a contrarian move these days. The masses are way off him right now due to a diminishing workload ever since the arrival of McCaffrey and while it’s tough to blame them with his seven catches for 66 yards over his last two games, he still has a significant advantage of the Arizona cover-corners. You probably need to be building more than one lineup to even consider using him, but we’ve seen stranger things happen in Showdown slates.

Many were shocked to see Mitchell get 18 carries in his first game since being activated from Injured Reserve, especially with McCaffrey in town, but that’s what Kyle Shanahan does. He loves rotating in his running backs and to have two who are as strong as Micthell and McCaffrey are, you can expect more work for both. McCaffrey will be the lead, but Mitchell is going to see enough touches to be a productive member of your lineup, especially against this soft Arizona defense.

We like Conner if Murray is under center but we LOVE Conner if it’s McCoy. With McCoy under center last week, Conner saw 21 carries out of the backfield along with three targets and should Murray be out, Conner is likely to see a fairly heavy workload once again. The 49er run defense is solid, allowing just 82.7 rushing yards per game but they have given up eight rushing touchdowns so if the Cardinal get inside that green zone, Conner should see some promising touches.

Nothing wrong with sneaking in Garoppolo should you believe that he can throw multiple touchdowns to get the proper value. Arizona is allowing an average of 247.1 passing yards per game with 17 passing touchdowns allowed on the season so it’s not like we’re worried about the match-up. He’s got the weapons to succeed, including two running backs who are dynamite at catching passes out in the flat, so if you have the budget and think he connect with more than one pass-catcher, he should offer up solid value.

Give some of the injuries on the Arizona offensive line and the possibility the Cardinals are forced to start Colt McCoy, the 49ers defense can certainly be used in tonight's contests as a way to save salary. San Francisco may only have 10 takeaways on the year, but they have the sixth-most sacks this season and their pass-rush could certainly make things difficult for Arizona.

Probably closer to a dart-throw here as the rookie tight end may be set for more of a featured role with Zach Ertz injured, but the 49ers rank 11th in DVOA against the tight end and they allow the sixth-fewest fantasy points per game. If you are a multi-lineup player, then maybe get some minor exposure here, but McBride has much better match-ups ahead.

They’re pretty much the same guy at this point. If you’re interested in wishing and hoping for a long touchdown, then use a flier on one of these two. Doesn’t matter which one.

**Keep in mind that both kickers – Robbie Gould and Matt Prater – are in-play this week. With the game taking place in Mexico City, we have altitude like they do in Denver. That means the ball can travel further so perhaps a few longer-than-usual field goals tonight.

He’s as good a dart-throw as any from the remaining 49ers players, but working in his favor is that he does actually see targets. Maybe not a lot, but all it takes is one to pay off his miniscule salary.

The touches have been relatively non-existent, but there has to be a reason the Cardinals opted to cut Eno Benjamin early last week. If Ingram can get even just a minor share of the workload, especially if Murray is out, I could see him getting some work inside the red zone.