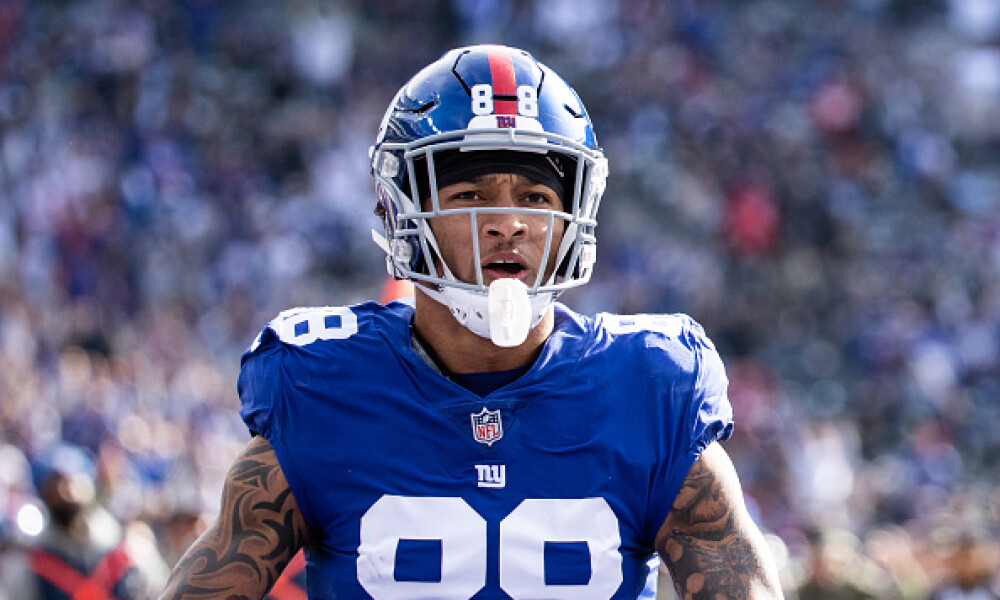 Here it is folks! The fantasy football article that no one asked for. In fact, some of my Twitter followers actively ask me to shut up about Evan Engram, the Jacksonville Jaguars' new tight end. But guess what? I recently realized that I’ve never actually written a full article on Engram and his fantasy football draft value for the upcoming 2022 NFL season. It’s only been in passing tweets and comments on Twitter or Reddit that I’ve given a glimpse of why I’m higher on Engram than most in my fantasy football tight end rankings and projections. Now it’s time to lay out, once and for all, why I’m scooping up Evan Engram in every fantasy football best ball draft this NFL offseason. Whether you like it or not!

Yes, I've drafted Evan Engram in every fantasy football league so far. My exposure to him on Underdog Fantasy is 100% in fantasy football best ball drafts. Will I diversify at point? Of course. But at his current ADP, I at least needed to make sure I have him in multiple Best Ball Mania III drafts, a contest with a $10 million prize pool where the winner gets $2 million. If you aren’t getting in on those yet, then you need to do the following: 1. Go over to Underdog Fantasy. 2. Use promo code ALARM (where they will match up to $100 in bonus credits with your first deposit). 3. Enter Best Ball Mania III. 4. Draft Evan Engram.

Let’s start by talking about Evan Engram himself. This isn’t just your average tight end. Let’s look at his measurables, per Player Profiler.

Yes, that is correct. Engram is in the 100th percentile speed for his position. The fastest tight end at the combine this year was Chigoziem Okonkwo, who ran a 4.52-second forty-yard dash – a full tenth of a second slower than Engram. Plus, Okonkwo's 4.52 is fast for a tight end and about as quick as guys like Noah Fant (4.50) and Albert Okwuegbunam (4.49). All three players fall in the 96-98th percentile for speed at the position. That’s how few tight ends are actually as fast as Engram – if you are a tenth of a second slower, you’re still in the top four percent of tight ends.

The only current starting tight end in that realm for speed is Kyle Pitts with a 4.44-second forty-yard dash, which Player Profiler adjusts to 4.49 since it was a Pro Day and not a legit combine speed. To find real comparable players for Engram in terms of size and speed, the best place to look is actually not tight ends but rather wide receivers. Here are some size/speed comparisons for the 6-foot-3, 234-pound Engram running a 4.42. These are, once again, from our friends at PlayerProfiler.

Engram's true best comparable players in terms of size and speed are actually NFL wideouts, not clunky tight ends. That’s why he’s capable of ripping off huge gains like his 75-yard touchdown in 2019. It’s why he’s recorded an in-game speed of 20.84 mph, which is the second-fastest on-field tight end speed over the last three years. Plus, his split end frame is why it’s possible for him to make catches like this:

There is a stigma surrounding Evan Engram. A lot of that stems from him never quite living up to expectations. So let’s delve a bit into this guy’s history and see what negatives are facts and which ones are myths.

2017 – The very start of his career is what likely set him up for disappointment in the eyes of fans and fantasy football players alike. Engram came out HOT as a rookie for the New York Giants, finishing as a top-five tight end in fantasy with then quarterback Eli Manning. He did this despite getting hurt in Week 15 and only playing 14 full games.

2018 – The next season he struggled with injuries, getting hurt in both Week 3 and Week 11, before missing multiple games afterward. However, if you take the nine full games he played and extrapolate that production out, Engram would have been on pace to improve from his rookie year with 108 targets, 74 receptions, 874 yards, and 5-6 touchdowns. That would have, once again, put him in the top-five fantasy tight end range.

2019 – In this season, Engram picked up where he left off with 11 catches on 14 targets for 116 yards and a touchdown in Week 1. Two weeks later, he had six catches on eight targets for 113 yards and a touchdown as well. Once again, however, he was bitten by the injury bug. Engram only played half the 2019 season but was on pace for 88 catches on 136 targets. That would have tied Travis Kelce for the league lead in targets while the 88 receptions would have tied Zach Ertz for third amongst tight ends. This season was the last for Eli Manning before rookie Daniel Jones took over in New York after the first couple of games.

2020 – This is arguably the most misunderstood season of Engram’s career. He finally got healthy and played all 16 games. He had the fourth-most targets, the fifth most receptions, and the eighth-most receiving yards of any NFL tight end. But here’s the problem – the offense was brutal. The Giants only scored 25 offensive touchdowns in 2020, which tied the Jets for dead last in the league. Daniel Jones turned the ball over 16 times and only threw 11 touchdowns. So, Engram was tied at TE51 in touchdown receptions with only one. Yes, fourth in targets, fifth in receptions, eighth in yards, and 51st in receiving touchdowns. Folks actually make jokes about him being selected to the Pro Bowl that year. The reality, though, is that the Pro Bowl voting total is comprised of the fan, player, and coach votes – each accounting for an equal third. The fans voted for TJ Hockenson and Robert Tonyan, but it was actually the players and coaches who sent Hockenson and Engram to the all-star game – recognizing his efforts despite the awful team performance. Perhaps the fans know best, but I’m more interested in what his peers believe.

2021 – The injury bug returned for Engram in 2021. Plus, Daniel Jones once again had a rough season with 10 turnovers and only 10 touchdown passes. Jones himself struggled with injury, so Engram spent some time catching balls from the likes of Mike Glennon and Jake Fromm. Another lost season where the Giants finished dead last in offensive touchdowns.

That brings us to the present day. Haters will, no doubt, respond to this article saying some snarky comment about drops. And Engram undoubtedly has had issues with dropped passes in the past. Still, dropping four balls in 2021 is not the reason the Giants were dead last in touchdowns. In 2020, Engram dropped eight passes in 16 games while George Kittle had eight drops in eight games. I’ve seen Jimmy Graham drop 15 passes in a single season from Drew Brees then turn around and be the top tight end in the league. The reality for fantasy football is that drops and fumbles only matter if the team loses confidence in you and you get benched. That never happened with Engram.

Now, he’s signed with a new team and he gets a clean slate. A team coached by Doug Pederson who HEAVILY featured tight ends like Zach Ertz and Dallas Goedert. Unlike Giants fans, the Jaguars don’t really care that he dropped that pass against the Eagles two years ago. They’ll evaluate him and deploy him based on the hundreds of passes he sees in practice – just like the Giants did when they continued to trust him and roll him out every game. As fans and fantasy football managers, it’s easy for us to make judgments based on the one day per week that we see them play. In reality, these guys are playing football and earning their job just about every day.

Some may point at the other pass catching tight end on the roster, Dan Arnold. Well, let's think about this logically. Both Arnold and Engram do similar things in terms of lining up at WR and not blocking. Arnold is under contract for one year, $2.5 million. Engram is under contract for a fully guaranteed $9 million. You don't sign Evan Engram to that deal to backup Dan Arnold. If they cut Dan Arnold, they would have $1 million in dead cap and $1.5 million in savings. However, if they trade him, the entire $2.5 million comes off the books. To me, the worst case scenario there is Arnold stays and he's “just a guy”. The likely case is they trade him for a day 3 pick around cut down time and keep the cash. They don't need redundant assets on one year deals.

If you believe in the talent and the upside for this guy who just entered the pass-catching age apex at 27 years old, then you have to like this new opportunity for Engram. We've discussed this before when it comes to elite upside for tight ends, the No. 1 barrier to entry is having a path to either leading your team in targets or at least being second.  Engram lands in a Jacksonville offense with a new coach, a new offensive coordinator, and a young quarterback. We don’t know who will get the snaps at split end, at slot, or at tight end. Christian Kirk is new to the offense. Marvin Jones is 32 years old. Laviska Shenault hasn’t done much. Why can’t Engram lead that team in targets? Or at least be one of the top two? Why can’t Trevor Lawrence be better than Daniel Jones? Why can’t Evan Engram be the elite fantasy football tight end we always thought he could be? The top-five tight end he was with Eli Manning? At his current average draft position on Underdog Fantasy as the 26th tight end, he’s not even being drafted as a TE2 – let alone a TE1. The downside is nothing at that ADP and the upside? It just might be league-winning.