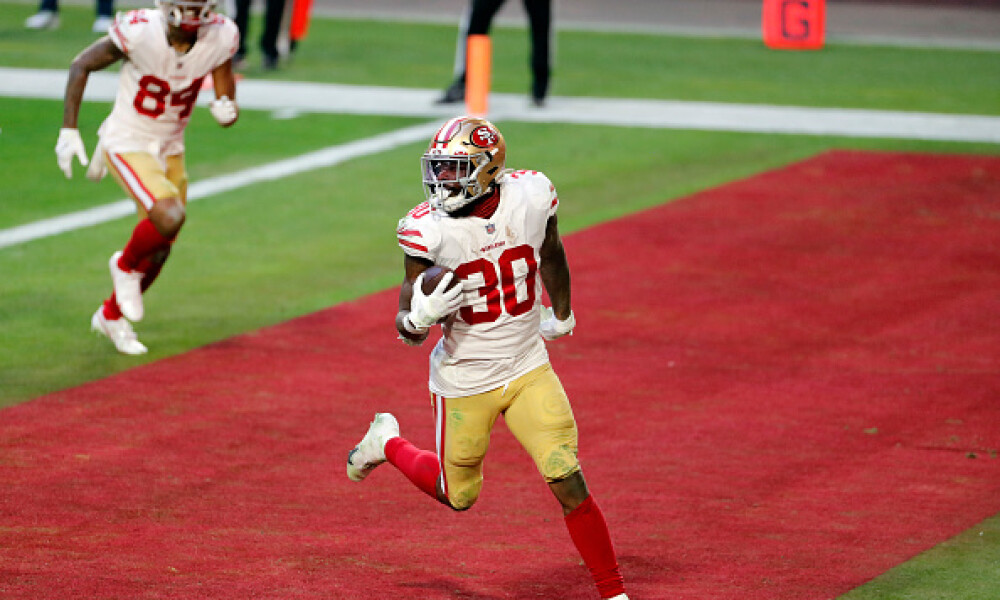 We’re sure you probably caught Cam Newton screaming out “I’m back” to anyone who’d listen or care, after he scored his first TD of the season against the Cardinals this week. “I’m back” could actually be the theme for our column this week.

Several fantasy RBs are eligible to come off the IR this week including Chris Carson and Clyde Edwards-Helaire. It looks like Carson could miss more time (check his progress later this week), but Edwards-Helaire may play Week 11.

WFT RB Antonio Gibson certainly looks like he’s back. He’s been hindered by a shin injury that’s still probably bothering him a bit, he did play 44 snaps against the Bucs this past week. Gibson rushed for 64 yards and only managed a 2.67 YPC average, but he did score two touchdowns.

Let’s check in on a few other NFL backfields of interest ahead of their Week 11 matchups.

With Elijah Mitchell breaking his finger in Monday night’s win against the Rams, Jeff Wilson Jr. will likely see an expanded role in in a Week 11 matchup against the Jaguars. JaMycal Hasty’s status for Week 11 is yet unknown (ankle) and Trey Sermon is securely in the 49ers’ doghouse. Wilson played 22 snaps in his first action of the season on Monday night. For his career Wilson has had a good nose for the end zone. In 29 career games (5 starts) he’s scored a total of 15 TDs.

Like Tony Pollard and Alexander Mattison, Browns RB D’Ernest Johnson has developed into a must own RB handcuff. With Nick Chubb and Demetric Felton sidelined (COVID) and Lamar Hunt still on the IR, Johnson scored just over 22 PPR fantasy points in Week 10. With Chubb and Hunt sidelined in Week 7, Johnson was also forced to take the reigns as the Browns’ lead back and he scored just under 25 PPR fantasy points. Hunt (calf) is eligible to come off the IR this week. It doesn’t look likely but monitor his progress as game time approaches.

The Eagles have become a run first time of late, and with two wins in their last three games it’s likely that they’ll continue to focus on their ground game. Jordan Howard (41 carries, 5.15 YPC, averaging 13 FPPG) and Boston Scott (33 carries, 5.48 YPC, averaging 11.5 FPPG) have led the way over the past three weeks, while Kenneth Gainwell (17 carries, 2.06 YPC) has been lagging behind. Miles Sanders (ankle) began the season as the Eagles’ lead back and is eligible to come off the IR this week. With the Eagles running the ball just under 69% of the time over the past three weeks there will probably be plenty of carries to go around, but there probably won’t be enough work to allow three RBs (Howard, Scott, and Sanders) to have fantasy value.

With Jamaal Williams (thigh) sidelined again in Week 10, (he hasn’t played since Week 7), D’Andre Swift was forced to carry the ball 33 times and play 93% of the team’s offensive snaps. Jermar Jefferson scored a 28-yard TD against the Steelers but is expected to miss some time due to an ankle injury. If Williams is ruled out for Week 11 expect Godwin Igwebuike to be Swift’s backup.

The Packers lucked out with Aaron Jones having only been diagnosed with an MCL sprain which is expected to sideline him for just the next week or two. A.J. Dillon is more than capable of carrying the rock while Jones is out. Dillon has averaged 11.1 PPR fantasy points per game (FPPG) over the past five weeks in a complimentary role and is fifth in the NFL in rushing yards after contact per rush. The Packers have slowly increased Dillon’s role lately. He averaged just under 29% snaps played per game for the first three weeks of the season, and since then that has increased to just under 38% snaps played per game. Patrick Taylor will be Dillon’s back up this week. If the Packers feel they need additional RB depth on their roster before Week 11’s matchup with the Vikings, they can turn to Ryquell Armstead who is on their practice squad. The Packers also worked out former Lions back Kerryon Johnson earlier this week.