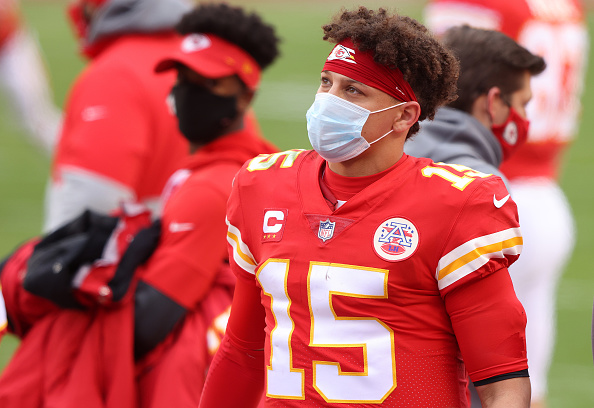 Football fans around the world held their collective breaths this past Sunday as Patrick Mahomes needed help just staying on his feet after taking a hit that forced him out of his matchup against the Browns. Fortunately backup QB Chad Henne helped to preserve the Chiefs’ win and they will play for the AFC Championship this coming Sunday. Will Mahomes? We’ll soon see. The following is an early look at some of the injury related news that we’ll be following this week ahead of NFL Championship Sunday.

Despite not actually having taken a hit to the head, Mahomes is in the league’s concussion protocol. Mahomes suffered what appeared to be concussion-like symptoms (unable to keep his balance), but according to the Kansas City Star Chiefs head coach Andy Reid, he passed concussion evaluation tests after he was removed from Sunday’s game. Reid further added that Mahomes showed some good signs on Sunday night and on Monday. There are five specific steps that must be completed in order for Mahomes to be allowed to play on Sunday. As part of the first step of the concussion protocol Mahomes will engage in activity that will increase his heart rate and he’ll be evaluated to see if he still exhibits concussion-like symptoms. From there Mahomes may be allowed to take the practice field on Wednesday. While the Chiefs are publicly optimistic regarding Mahomes’ condition, on average quarterbacks miss seven days due to a concussion. Mahomes has six full days to be cleared for Sunday’s contest against the Bills. Reid also addressed Mahomes’ toe injury, which caused Mahomes to limp around on the field before his untimely exit, stating that “yeah, I think he’ll be okay there for right now with the toe part.”

Edwards-Helaire was limited at last Wednesday’s practice and unable to practice on Thursday or Friday. Despite being designated as Questionable on Friday he was inactive against the Browns on Sunday, missing his fourth consecutive game.

Dillon left Saturday’s game against the Rams and was unable to return. Packers head coach Matt LaFleur was “hopeful” that Dillon would be able to play this Sunday and is unsure if he’ll be able to practice on Wednesday. The Pack did a good job of rotating Aaron Jones , Dillon and Jamaal Williams in and out on Saturday, allowing the trio to “stay fresh.”

Watkins was unable to practice all of last week and was inactive against the Browns this past Sunday. He has missed six games already this season and we’ll continue to monitor Watkins availability to practice this week.

Brown, who spent much of the second half of his matchup against the Saints on the sidelines, is undergoing an MRI on his knee. He was only able to play 29 snaps and caught just one pass for 29 yards before being removed from Sunday’s game. We probably won’t get an update on his condition until Wednesday.

The Buccaneers designated Vea to return from the Injured Reserve list. He can begin practicing on Wednesday and is eligible to be activated for Sunday’s game against the Packers.