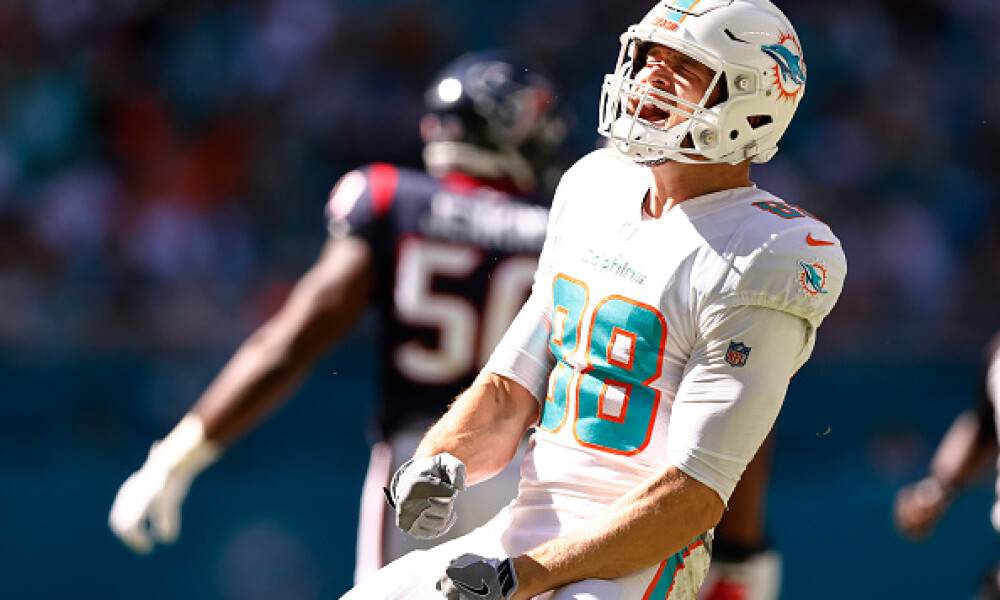 This year’s class of tight-end free agents is deep and extremely talented, so several of them could land big paydays. On the flip side, the class is so deep that some teams struggling with cap space could land some stars for cheap. Let’s look at some of the top free-agent tight ends for 2022.

Although he’s technically labeled a tight end, Mike Gesicki’s role is that of a wide receiver, and he wants to be tagged that way. If the Dolphins decide to go this route and give him the receiver tag over the tight end tag, Gesicki’s payday would increase from just over $10 million to over $19 million. The Dolphins definitely need receiver help with Will Fuller’s chronic injuries and DeVante Parker’s age, and they have the cap space to do it. The question is if head coach Mike McDaniel is going to invest in a tight end who doesn’t block. If Miami can’t get a deal worked out with Gesicki, the Jets, Titans, and Chargers could all be in play.

After a breakout season in 2021, Dalton Schultz will likely command a high price in free agency. Dallas has some pretty severe cap issues, and to make matters worse, they have 24 players scheduled to enter free agency, leaving them with some difficult decisions to make. It’s unlikely that Dallas tags Schultz at a $10 million price tag, so he’s going to have his pick on the open market. The Colts have plenty of cap space, and Jack Doyle has hinted that he is considering retirement, making Schultz an intriguing replacement. The Jaguars and Jets are also in the conversation.

Zach Ertz made an immediate impact on the Cardinals after being traded from the Eagles in mid-October last season, becoming a security blanket for Kyler Murray in the absence of DeAndre Hopkins. Fellow tight end Maxx Williams is also a free agent this season, but he’s also coming off an ACL injury, so he will likely walk. If the Cardinals decide to franchise Ertz, he would see a slight increase over his 2021 contract, and he has expressed his desire to stay in Arizona. A franchise tag makes the most sense, as Ertz is aging and the Cardinals do have cap space issues, but if the two can’t get a deal worked out, the Chargers, Jaguars, and Giants would all make sense for the former Pro Bowl tight end.

One of the most surprising things about the Bengals unlikely Super Bowl run was the emergence of C.J. Uzomah. In 2021, Uzomah set career highs in yardage, touchdown receptions, and reception percentage. He was also an efficient pass blocker, and with that offensive line, that made a huge impact on protecting Joe Burrow. The Bengals have the fourth-most cap space in the NFL in 2022, so it’s likely they find a way to keep him while still being able to address their offensive line issues. If they don’t, however, the Browns and Giants all have potential holes at tight end, and Uzomah would be an upgrade over Austin Hooper, David Njoku, and Evan Engram.

In the event he doesn’t retire (again), Rob Gronkowski is still every bit the beast of a tight end he has been his entire career. Despite missing five games due to broken ribs and a punctured lung, Gronk still ended the season with over 800 yards and six touchdowns. He’s a Hall of Famer with a lot of gas left in the tank, and now that Tom Brady is retired, it's highly unlikely that he stays in Tampa Bay. Gronk has said that he would like to play with Joe Burrow, so if the Bengals could get a better deal for him than Uzomah, it’s not out of the question to see him go to Cincinnati.