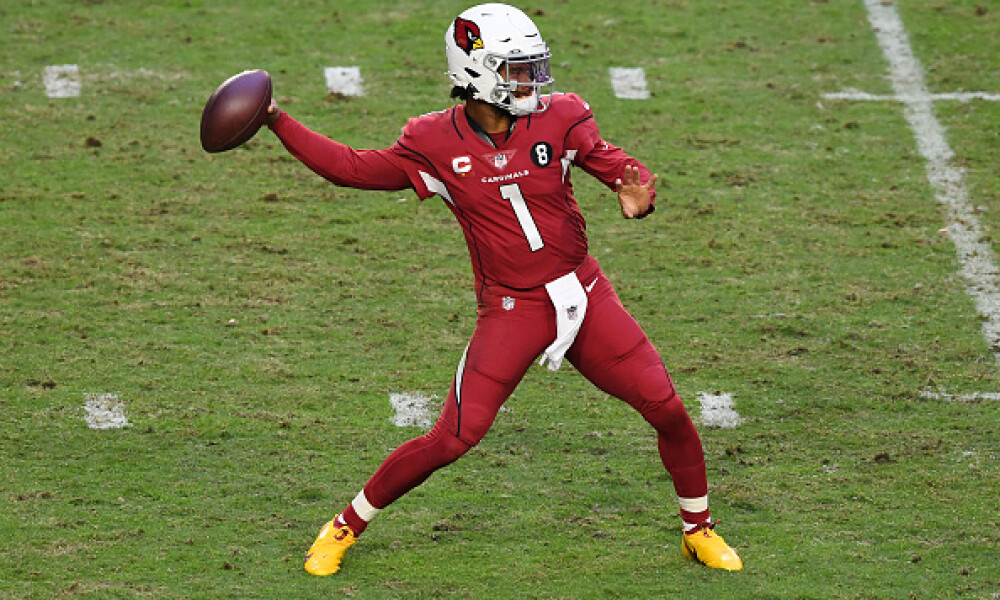 Kyler Murray (ARI) Murray practiced in a limited capacity on Thursday. If he logs a full session on Friday you can feel pretty good about him starting on Sunday. However, even if he’s limited there’s still a very strong chance he gets the start on Sunday. Luckily this week the Cardinals play at 1:00pm ET so you’ll know by 11:30am ET if he’s officially active or not.

Jalen Hurts (PHI) Hurts was a limited participant during Wednesday and Thursday’s practices. Both he and head coach Nick Sirianni are very optimistic he’ll be able to suit up for Sunday’s game against the Jets. There’s always the possibility they rest him, especially with the bye week coming up. However, Friday’s practice will provide some insight into his availability for Sunday. No need to stress too much about him being inactive, however. Update: Jalen Hurts will not play on Sunday. Gardner Minshew will start in his place.

Daniel Jones (NYG) It was announced earlier in the week the Giants would be preparing as if Mike Glennon would start in Miami on Sunday, but Daniel Jones has been a limited participant this week. Jones is dealing with a strained neck that was supposed to keep him week-to-week, but with his emphasis on participating in practice he’s more of a day-to-day call. Don’t expect a decision to come on his status until 11:30am ET. Update: Jones has not been cleared for contact and he has been ruled out for Week 13. Mike Glennon will get the start.

Justin Fields (CHI) Fields is still dealing with some fractured ribs that kept him out of last Thursday’s Thanksgiving game against the Lions. His status on Friday will paint a more vivid image as to whether or not he could play on Sunday. It would come as no surprise if he was given another week off to heal as the Cardinals come to town in Week 13. Update: It was announced on Friday that Andy Dalton will start on Sunday and Nick Foles will be the backup.

Dalvin Cook (MIN) Cook was absent during Thursday’s session and while the Vikings haven’t officially ruled him out for Sunday’s game against Detroit, it’s highly unlikely he suits up this week. Alexander Mattison is in line for a heavy workload.

Darrell Henderson Jr. (LAR) Henderson is battling a thigh injury he sustained in Sunday’s game against the Packers. Even if he doesn’t log a practice session on Friday there’s a chance he plays on Sunday, although it could be in a limited capacity. With the Rams playing at 4:05pm ET on Sunday you won’t know his official designation until 2:35pm ET. Monitor the practice reports and follow along Saturday and Sunday morning to get a read on his status.

James Robinson (JAC) As of right now there’s little reason to be overly concerned with Robinson. However, he has been a limited participant all week with a heel/knee injury. If he gets a full practice session in on Friday then he might enter the weekend without an injury designation but for now he’s worth keeping an eye on. The Jags play at 4:05pm ET on Sunday so have a backup plan if you have no other Sunday afternoon running backs.

Antonio Gibson (WFT) Add Gibson to the growing list of running backs that were limited participants on Thursday. Ultimately, it doesn’t seem like a big deal. Jaret Patterson is in line for a slightly larger workload with J.D. McKissic getting hurt. Ultimately the extra passing downs work could go to Gibson as he potentially becomes the fantasy asset we all thought he could be during the preseason.

Melvin Gordon (DEN) Gordon didn’t practice Thursday and based on comments by Vic Fangio, it appears as if Gordon has a 50/50 chance of playing Sunday night in Kansas City. Javonte Williams stands to have a large workload against the Chiefs. Unfortunately, it looks like Gordon will be a game time decision on Sunday so be sure to have a backup plan in place. UPDATE: Melvin Gordon is Doubtful to play Sunday night against Kansas City.

David Johnson (HOU) Johnson didn’t practice on Thursday due to a non-COVID-related illness. Additionally, he also suffered a thigh injury during Sunday’s loss to the Jets. If he practices on Friday it’s likely he plays on Sunday, but I wouldn’t panic if he sits again on Friday.

Alex Collins (SEA) Collins was a limited participant for Thursday’s practice. That doesn’t necessarily help fantasy owners who struggle with the weekly decision to start or sit him. Whether he’s active or not, just keep him on your bench this week against the 49ers.

Boston Scott and Miles Sanders (PHI) The Eagles primary runners are all dealing with “something” this week. Hurts has an ankle injury. Sanders also has a lower body injury and Scott hasn’t practice the last two days with an illness. Howard’s dealing with a knee injury and he was also out for Thursday’s practice with a knee injury. This is probably one of the biggest backfield situations to monitor. If one is active while the other is out, the active player is due for a nice workload. Update: Scott was still not at practice on Friday with an illness.

DeAndre Hopkins (ARI) Hopkins has been out since Week 8, but both he and Kyler Murray are trending towards playing this week. It won’t be official until Sunday morning, but he’s playing in the early slate of games so you can feel good about knowing whether you have him as an option or not on Sunday.

Deebo Samuel (SF) While it’s highly unlikely Samuel plays this week, some good news can be found in the fact that he was working with the training staff on the sidelines during Thursday’s practice. This could be an indicator he’s ahead in his recovery process.

Brandin Cooks (HOU) Cooks must be dealing with the same illness as David Johnson. He was also listed as a non-participant for Thursday’s practice. It’s said to be non-COVID related, but it’s worth keeping an eye on heading into the weekend.

Odell Beckham Jr. (LAR) OBJ was a limited participant on Wednesday, but a non-participant on Thursday as he’s dealing with a hip injury. He’ll likely go into Sunday with an injury designation, but hopefully we get some clarity on his injury status as we wake up on Sunday.

Allen Robinson (CHI) Robinson has been listed as a non-participant the last few weeks and that was no different on Thursday. He’s dealing with a hamstring injury and those can easily be re-aggravated. He’ll likely be a game time decision for Sunday afternoon’s game, but it looks as if he’ll once again miss this week’s contest.

Corey Davis (NYJ) Davis has been sidelined with week with the groin injury that left him inactive in Week 12. He was able to practice in a limited fashion a week ago before being deemed inactive last week. All signs are pointing to a similar designation for this week’s matchup against Philadelphia.

Sterling Shepard and Kadarius Toney (NYG) Shepard was a limited participant in Thursday’s practice. It’s a good sign, but he’s also missed the last couple games for the Giants and it still looks like a spot where he could be forced to sit out this week’s game in Miami. Toney, on the other hand, was a non-participant in Thursday’s practice as he worked with the training staff on the sideline. Shepard at least looks like he has more of a chance to play this week, but keep an eye out for Friday’s injury report from the Giants.

Curtis Samuel (WFT) Samuel’s groin injury kept him as a limited participant during Thursday’s practice. He’s going to go into the week at less than 100%, but there’s still a chance he gives it a go similar to what we saw last week.

DeSean Jackson (LV) Jackson was a limited participant on Wednesday and then was nowhere to be found on Thursday. He’s dealing with a calf injury, but we should get more clarity on Friday regarding his absence on Thursday.

Darren Waller (LV) It’s no surprise Waller is trending towards missing this week’s game. He suffered a knee injury last Thursday and has been labelled week-to-week. Waller has missed both practices this week so far. Foster Moreau will likely be the starting tight end but I don’t think he carries much weight for fantasy purposes. I’d rather look elsewhere for a streamer.

Pat Freiermuth (PIT) Freiermuth has been working his way out of the NFL’s concussion protocol, but the good news is that he’s logged back-to-back full practice sessions so he’s trending towards playing on Sunday.

Logan Thomas and Ricky Seals-Jones (WFT) Thomas has been a limited participant this week, but take that with a grain of salt. He’s coming off a near eight-week absence and they don’t want to risk him getting injured during practice so these are likely scheduled maintenance days. Thomas’ backup, Ricky Seals-Jones, was inactive last week with a hip injury but practiced in a limited capacity on Thursday. He is trending towards playing this week.

Cole Kmet (CHI) Kmet was a non-participant in Wednesday’s practice but he did log a limited session on Thursday. He’s battling a groin injury so while he likely plays this week, it is worth keeping an eye on ahead of Sunday’s game against Arizona because these are easy injuries to aggravate. On the slight off chance that he misses time, Jimmy Graham could see a little extra run.

Jack Doyle (IND) Doyle has been a pleasant surprise the last few weeks with three touchdowns in his last five games. He sat out Wednesday’s practice with a knee injury, but was limited on Thursday. All signs point to him playing this week as of Friday morning.