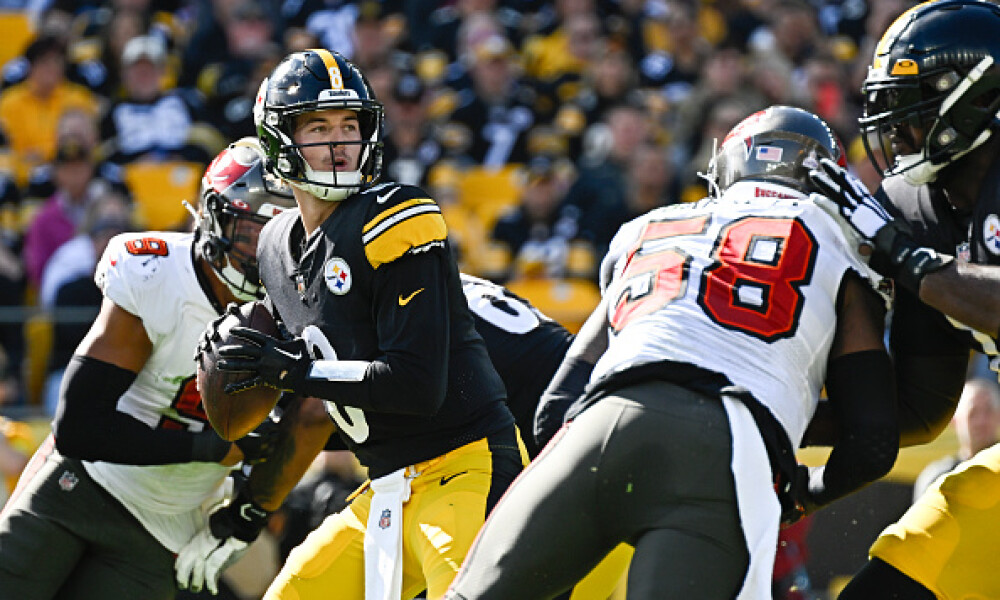 Sunday's NFL Week 6 afternoon action is coming to an end but not all escaped unscathed as some notable players once again went down with injuries. Before checking out the fantasy football waiver wire as we head into Week 7 let's take a look at some of the notable names who went down this week and give updates on their status.

Steelers QB Kenny Pickett was knocked out of Sunday's game during the third quarter against the Buccaneers with a head injury. He was evaluated for a concussion and subsequently ruled out.  Mitch Trubisky replaced Pickett and led the Steelers to an upset victory over the Buccaneers. As of now there has been no further updates on Pickett's status but given the emphasis on concussions around the NFL we can likely expect Pickett to miss the team's Week 7 game against the Miami Dolphins.

Making his first NFL start, Thompson left early in this game with a hand injury which had him questionable to return.  Ultimately the Dolphins stuck with Teddy Bridgewater in his place. Neither QB who played this week will be starting for the Dolphins next week however as Tua Tagovialoa has already been named the starter for the team's Week 7 game against the Steelers.

Jackson was having quite the performance on Sunday, totaling 42 yards and a touchdown on the ground while adding 10 catches for 79 yards through air in his spot start for the injured Jonathan Taylor. Taylor was close to returning this week so while Jackson's status is certainly one to monitor, there is also a high likelihood that Jonathan Taylor is back for the Colts Week 7 matchup.

Kenyan Drake had a big game on Sunday against the Giants because J.K. Dobbins was limited to just seven carries as he dealt with knee tightness and didn't play during the second half of the game. Given the serious knee injury that Dobbins is coming back from it would not shock me to see the Ravens be extra careful with him moving forward, especially with the fact that Gus Edwards is nearing a return and Kenyan Drake proved more than capable of carrying the load.

At the end of the Cardinals matchup against the Seahawks we saw Marquise Brown go down and need the assistance of trainers to get off the field with what looked like an ankle injury. The severity of the injury is not yet known but a loss of Brown for any amount of time would be a tough blow to a Cardinals offense that was just about to be whole with the expected return of DeAndre Hopkins in Week 7.

While not a major player in the Patriots offense, Bourne left Sundays game against the Browns with a toe injury and did not return. The Patriots passing attack looks to heavily feature the likes of Jakobi Meyers, DeVante Parker and rookie Tyquan Thornton moving forward so this Bourne injury is unlikely to carry much fantasy football impact.

The scene of Cobb leaving the field on a cart with tears in his eyes led many to think the veteran receiver may have suffered a season ending injury but x-rays were negative and Aaron Rodgers told reporters after the game that there was a possibility Cobb lands on the short-term injury report which would allow him to still return this season. Cobb was coming off his seasons best performance against the Giants in Week 5 but had just one catch for eight yards at the time of his injury.

Saints tight end suffered a foot injury on Sunday in a bizarre play that saw him go in motion and then collapse. Trautman was later carted to the locker with what has been has been speculated as a foot or ankle injury. As of now there has been no further update from the team. If Trautman is to miss extended time then Juwan Johnson may be a priority add on the waiver wire.

Brate was returning this week after suffering a concussion two weeks ago. Unfortunately the Tampa tight end suffered yet another head injury this week that knocked him out of the game and more than likely will keep him on the shelf for a few weeks given how soon he suffered his second head injury. Rookie Cade Otton is the tight end to roster now in the Tampa Bay Buccaneers offense.