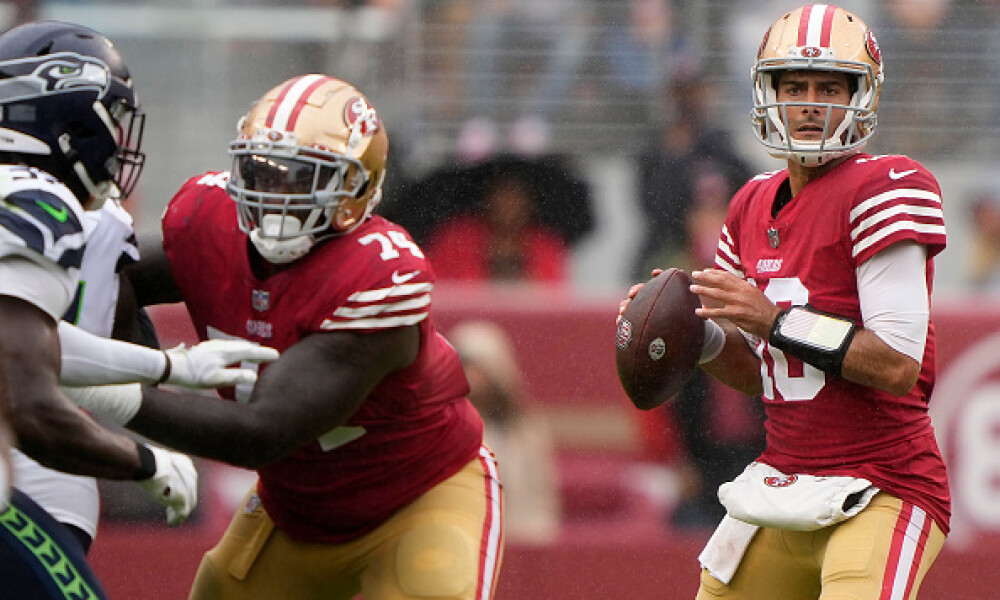 In Week 2, 49ers QB Trey Lance suffered an ankle injury that will require surgery and end his season. In his place the 49ers now turn to their former starting QB in Jimmy Garoppolo who, up until this season, had been under-center in San Francisco since 2017 which included a Super Bowl run back in 2019.  Injuries are part of the NFL. It's an unfortunate occurrence that we as fans and fantasy players certainly don't hope for but they do happen and when they happen, often times, there are big implications to player roles and thus fantasy impact. So, the question now is whether or not Jimmy Garoppolo is worth a claim off the fantasy football waiver wire in Week 3? Should you be spending your fantasy football FAAB on Jimmy G if you were a Trey Lance manager? Let's take a look at Garoppolo's Week 2 performance and whether there is any starting viability when it comes to his fantasy football value this season.

Is Jimmy Garoppolo Worth the Week 3 Waiver Wire Claim?

Garoppolo entered with a little more than two-minutes to go in the first quarter of the 49ers Week 2 matchup against the Seahawks and went on to complete 61.9% of his passes for 154 yards and a touchdown while adding four carries for five yards and a rushing touchdown which was good for 16.7 fantasy points. A modest score but it certainly could be worse. In 2021, Garoppolo appeared in 15 games for the 49ers, completing 68.3% of his passes for 3,810 yards with 20 touchdowns and 12 interceptions. His 254 passing yards per game was good for 12th among NFL QB's last season and he led the league in yards gained per completion at 12.7 yards.

So, is Garoppolo worth a week 3 waiver wire claim for those looking to replace the injured Trey Lance?  In SuperFlex Leagues or a league where you start two QB's the answer is a clear yes. The QB depth on the waiver wire in those league formats likely doesn't have anyone left with a starting job and therefore that makes Garoppolo a hot commodity.

If you find yourself in a single QB league and lost Trey Lance and didn't already have a backup option then that was likely poor planning but Garoppolo could be a streaming option in certain matchups such as Carolina or Atlanta in Week 5 or Week 6 but outside of that the 49ers have a pretty tough schedule this season and the waiver wire more than likely has some higher upside plays available to you like a Carson Wentz who is less than 60% rostered in standard league formats or a Marcus Mariota whose rushing potential makes him an interesting play against the Seahawks in Week 3.