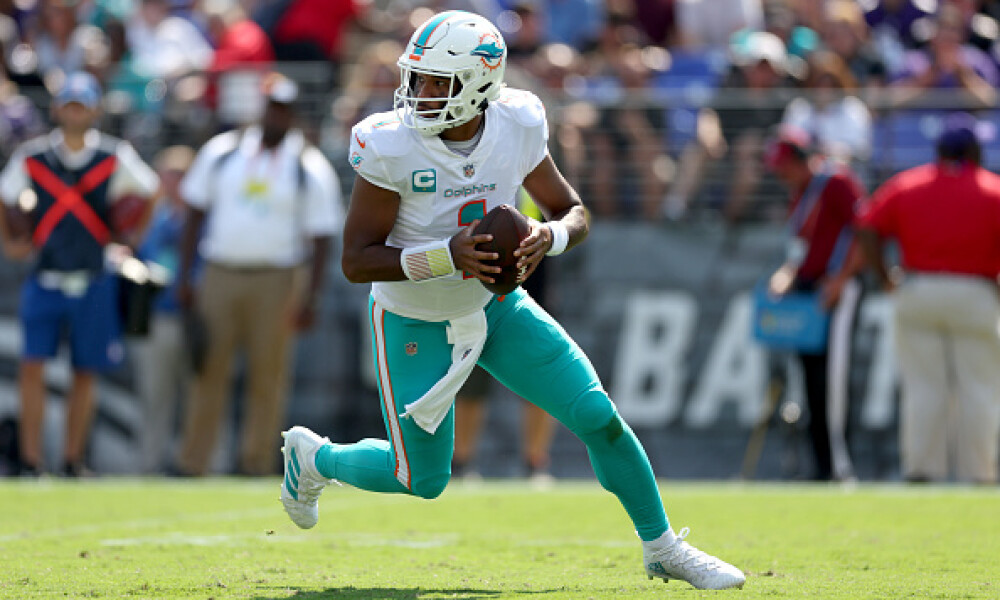 Good morning, my fellow NFL fans! Before I dive into it, let’s get a temperature check. How are y’all feeling after Week 2? Are you feeling on top of the world because you started any combination of Tua Tagovailoa, Tyreek Hill, or Jaylen Waddle, or are you feeling a little left out in the cold by the loss of Trey Lance or the underwhelming performance by Kyle Pitts or Tom Brady? If the answer is the latter, slide on over here, take a seat, and warm up with some hot takes. We have PLENTY to talk about this week, but, as you know, this isn’t just a casual piece. We go all in here!

We could talk about how Nathaniel Hackett can’t…um…”hack it,” or how we’re worried about Arthur Smith’s usage of Kyle Pitts, but those takes are a dime a dozen. We’re high rollers here! Do you want to cash in your chips and leave the table for the penny slots, or do you want to sit at the high stakes table with me? That’s what I thought. Let’s hit some Week 2 hot takes.

Tua Tagovailoa Will Lead the League in Passing Yards

What’s that I hear? Silence? The Tua haters who said he can’t complete a deep pass or that he’s not the answer in Miami are awfully quiet today. Sure, the Dolphins were playing against a depleted Ravens secondary, but 469 yards (with 233 of those coming in a fourth quarter rally) is something special. The addition of Tyreek Hill to this receiving corps has not only added another weapon for Tua, it also opened up Jaylen Waddle, making him nearly unstoppable. Mike McDaniel looks like he has this offense dialed in, and Tua has something to prove after years of being underrated. Next up for the Dolphins and Tua is their AFC East rival, the Buffalo Bills, but after that, they face the Bengals, Jets, and Vikings. Nothing I’ve seen in the first two weeks of the season makes me think they’re slowing down anytime soon, and Tua is currently leading all passers by nearly 100 yards. If anything, expect Tua to get better as he continues to build chemistry with Tyreek Hill. This guy is the real deal and can hang with any quarterback in the league.

Fool me once, shame on you, but fool me twice, shame on me. I bought into Carson Wentz and his resurgence last season as a top waiver wire pick up, then it came back and bit me in the…well, you know. Through Week 9, Wentz ranked as the overall QB10, then he hit a wall and only scored over 13 fantasy points in a game twice the remainder of the season. Look, I know where he ranks overall so far this season, but the Commanders schedule has been as soft as wet toilet paper, and most of the points Wentz put up today were more a result of desperation than talent or competence. He missed BADLY on several deep throws, and better defenses down the stretch are going to capitalize on those miscues. Wentz may be a solid streaming option depending on the week, but if you’re picking him up as a weekly starter, you’re gonna have a bad time.

Joe Flacco Should Start Even When Zach Wilson is Healthy

They say you can’t teach old dogs new tricks, but it seems like Flacco walked into the Dawg Pound today with plenty of tricks already in his arsenal. While he hasn’t been a starting quarterback for four years, Joe Flacco looked every bit like a starter against Cleveland’s defense on the road, leading the Jets to a come-from-behind win. Did he look like his former MVP self? Not unless you were drinking the Kool-Aid, but he did bring fantasy relevance to Breece Hall and Garrett Wilson, which is more than you can say for Zach Wilson. While he’s talented, I don’t think there’s any way Wilson could have led the Jets to victory today, and that’s where Flacco edges him. The Jets are an extremely young team who are rebuilding, and a veteran presence in their midst may be just what they need to develop into a respectable football team. (My apologies to Howard Bender, but they’re not there yet.) Let the old dog lead and teach the pups some new tricks for a while and watch how much the offense improves, especially from a fantasy standpoint.

Nick Chubb is a League Winner (Yes, Even in PPR Leagues)

Nick Chubb may be one of the most disrespected players in fantasy football, all because he “doesn’t catch passes.” Well, to quote Jay-Z, “If you faded Nick Chubb, I feel bad for you, son,”...or something like that. After two weeks, Chubb is currently the overall RB1 in both standard and PPR, and he was being drafted around the third round in most drafts. The Browns will likely continue to rely on their run game throughout the majority of the season while Deshaun Watson is suspended, and Chubb is a STUD. Through two weeks, he’s averaging nearly 5.9 yards per carry, and he’s even had a role in the pass game. “But why are you calling him a league winner so early in the season?” Well, I’ll tell you. The Browns play the Commanders in Week 17 who, so far, have allowed the third most rushing yards per game with a 7.5 yards per carry average. Chubb is going to EAT against the Commanders during championship week.

Jaguars are the Team to Beat in the AFC South

It’s amazing what a change of scenery will do. Well, in this case, a change at head coach, but you know what I mean. Doug Pederson has lit a figurative fire under this team, and they not only beat their division rivals today, they shut them out. Their defense pressured Matt Ryan all day long, forcing him to throw three interceptions and holding him to only 195 yards. The Colts and Titans were favored to win the division, but after the Monday night game, it’s likely the lowly Jaguars will be the only team with a win on their record! Trevor Lawrence came out looking every bit like the number one overall pick, finishing the game with an astonishing 83% completion percentage, and I don’t believe they’ve even begun to scratch the surface of this explosive offense. It finally looks like all the pieces are coming together in Duval County.