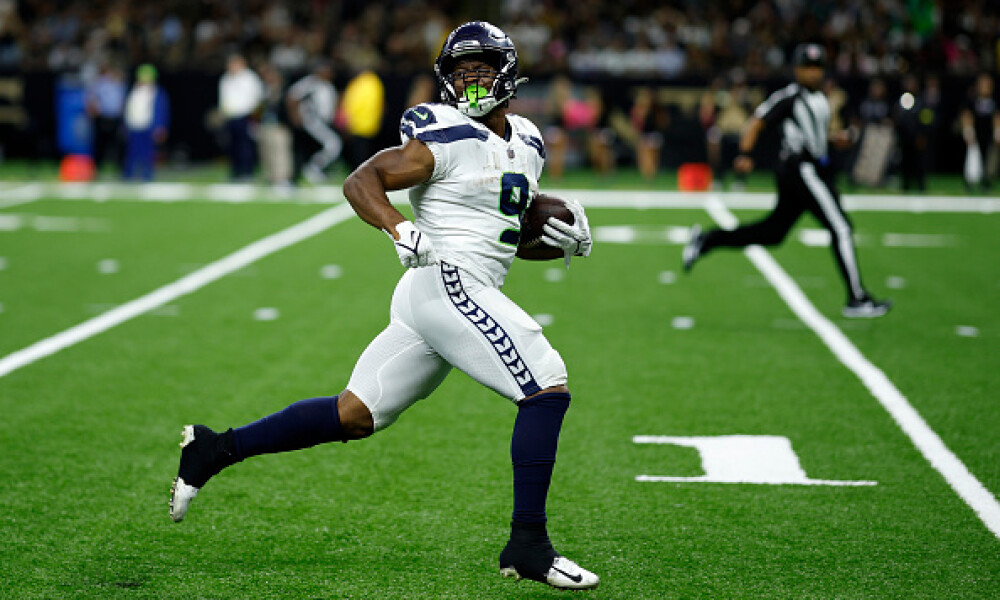 We have another exciting week of NFL action in the books along with all of the requisite drama, stress, and excitement. While we are always going to have players come out of nowhere with explosive performances, Taysom Hill (maybe not complete nowhere, but at least from a fantasy perspective), there are also going to be serious injuries that send you running to the waiver wire. With Rashaad Penny out for the rest of the season, Kenneth Walker III is going to be a popular option this week as will Jakobi Meyers as he made his way back from injury. With the first set of bye weeks upon us, the NFL waiver wire will take on even more importance, so let us take a look some options.

On an overall basis, Washington is not a very good football team, but that is very different than how things reflect upon them from a fantasy perspective. Out of five weeks so far this season, Wentz has been terrible in two weeks, and in the other three he has eclipsed the 300-yard mark with nine passing touchdowns. This week, Wentz takes on the Bears and that should lead to another favorable week for Wentz.

Garoppolo is never going to be a quarterback that truly lights things up and brings your match-up over the top. At the same time though, things are going pretty well for San Francisco at the moment and Garoppolo has value as a game manager who will not hurt your squad. If you are looking to plug a hole at the quarterback position, Garoppolo can help this week, but it is more about floor than upside.

With Rashaad Penny sidelined for the remainder of the season with a serious leg injury suffered on Sunday, the Seahawks backfield now truly belongs to the rookie Walker. Seattle’s offense has surprisingly been pretty good this season and after being drafted in the second round of April’s draft, big things were expected from Walker this season. This week was the busiest of Walker’s young career, and also the best, as he turned eight carries into 88 yards which included an impressive 69-yard touchdown run. The fact that Walker as a clear hold on the job for Seattle goes a long way here as there is not much competition at the moment.

It should not be completely surprising, but James Conner has been on the uneven side to this point and nagging health issues are never far away. That placed Benjamin on my radar prior to Sunday’s game, but the health issues surfaced again on Sunday with Conner leaving before halftime with a rib injury. With Darrel Williams then injuring his knee, it really left Benjamin as the last man standing for Arizona. Benjamin parlayed that into a season high eight carries on which he gained 25 yards while scoring a touchdown along with catching three passes for another 28 yards. Depending on the health of Conner, it is unclear what Benjamin’s role will be next week, but we do know it will be expanded.

There is not much excitement here in McKissic, especially with the return of Brian Robinson, but bye weeks are coming. That means there will be even more holes than normal to fill on rosters, and the third down back does bring a certain level of security with him. Washington will generally either be trailing or in a position where they need to throw the ball and will translate into targets for McKissic. While we might not be working with an incredibly high ceiling, there is solid floor here and that is even more so evident in PPR leagues as McKissic caught five of his seven targets for 37 yards this past week.

After being targeted 19 times in the first two weeks of the season (13 receptions for 150 yards), Meyers found himself sidelined the next two weeks with a knee injury. That absence likely led to the receiver finding himself on his share of fantasy waiver wires, but Meyers returned in a big way this week. We do have to issue the caveat that it came against Detroit’s passing defense, but it is hard to argue with a 38% target share and the fact that Bailey Zappe was locked into Meyers all afternoon. Meyers was able to turn eight targets into seven receptions for 111 yards and a touchdown and there is no doubting who the number one receiver for New England is.

Pierce had his share of buzz as it got closer to the regular season, but the rookie then had to wait until Week 3 to pick up his first career reception. In fairness to Pierce, the Colts’ offense as a unit was not in good shape over the first two weeks of the season but both Matt Ryan and the rookie receiver appear to have found their groove. It is no conscience that Pierce’s success is tied to Ryan looking more comfortable, but it is hard to argue with 15 receptions for 222 yards over the past three weeks. Last week, Pierce was the best receiver across the board for the Colts with eight receptions for 81 yards on nine targets. Michael Pittman will also be a large factor in the passing game for Indianapolis, but there is enough room both receivers to be viable fantasy options.

Something had to give in Giants’ receiving corps as they are quite simply lacking for options for Daniel Jones to throw the ball to. Now that is not to say that the focus of New York’s offense to throw the ball down field, but Slayton does need to move the ball through the air at times. After having flashes of success in the past, Slayton was a forgotten man entering the season and really up until last week. Slayton was targeted seven times and caught six passes for 79 yards and with no one else really emerging among the receiving corps, I would look for him to continue to be involved moving forward.

For starters, Hill is not eligible at TE in all league formats, but he is on the Yahoo platform (among others) so let us ride with him here. We also know how rough the position has been this season, so it is getting awfully hard to ignore what Hill is doing on the field. That is certainly the case after his Week 5 performance, and while we do not want to go chasing a repeat, a nine-carry effort in which Hill gained 112 yards while finding the end zone three times is pretty significant. Hill also threw for a fourth touchdown, and the versatile Saint will likely continue to have a role, in some facet, each week for New Orleans.

Hurst found the end zone for the second straight week on Sunday as he caught six of his seven targets for 53 yards. While he does not stand out as a truly explosive option, Hurst does appear to be relatively consistent option and the Bengals are a strong offense, so if we are looking for options off the waiver wire, there is enough to work with.