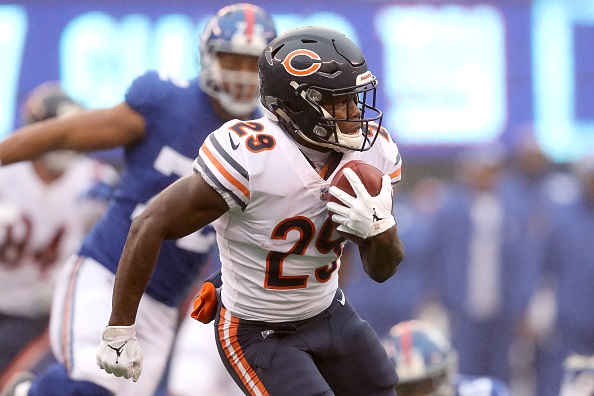 Welcome to the seventh edition of the RB previews! Now that the NFL schedule has been released, we can dig into it and how to work around the bye weeks for fantasy. At nearly any other position, I would say to not really overly worry about bye weeks; there are usually plenty of options to mix in during bye weeks. However, running back can be a bit tricky and spreading out the bye weeks is probably something you should try to make happen, especially in best ball formats with no trading or waivers. Let’s breakdown some potential bye week fill-ins (keep in mind this is a very early look and a lot could change by the time the season starts). Make sure to check out Impemba’s Bye Week Breakdown as well. Without further ado, let’s dive in!

Tarik Cohen (Bears – ADP: 113.1 – Bye Week: 11) – You know what you’re getting with Cohen, and while it usually isn’t a whole lot, it can be enough as a bye week fill-in. The good thing about Cohen is that he has a solid floor in PPR leagues, which is what you want from a fill-in. Another good part with Cohen is that there is very little behind him and Montgomery on the depth chart, which means Cohen is an injury away from a high-volume role. As it currently stands though, he is only useful in PPR leagues and should not be in your starting lineup on a regular basis. His ADP being the earliest on this list makes him my least favorite target of the bunch, but he’s also probably the safest.

Boston Scott (Eagles- ADP: 136.5 – Bye Week: 9) – The Eagles showed their confidence in Scott last season as he gained a bigger role as the season went on. He is currently slated to be the direct backup to Sanders and he caught 23 passes on 25 targets over the final four weeks of the season. I find his ADP to be pretty interesting because he should catch similar amounts of passes to Cohen (potentially more) while also picking up more carries. The Eagles love to rotate backs and Scott should get plenty of touches in the backup role. He is worth a roster spot and he is one injury away from a high volume role. There has been talk of the Eagles showing interest in Carlos Hyde , but I feel as though he would be more of a mentor to Sanders and Scott than anything else.

Justin Jackson (Chargers – ADP: 165.4 – Bye Week: 10) – Jackson was included in my sleeper piece and I think he fits here as well. Many believe that Joshua Kelley will cut a huge hole into Jackson’s workload, but I am not one of them. Jackson has been very impressive throughout his NFL career when healthy and given opportunities and there is no reason to believe that will change this season. Jackson is a bit of an outlier on this list as he is not a high-floor PPR guy like some of the others, he will likely be more boom-or-bust with more touchdown upside than the others on this list. He is also an Ekeler injury away from being in a very prominent role and is worth a roster spot in any format.

Chris Thompson (Jaguars – ADP: 218.1 – Bye Week: 7) – Thompson recently signed with the Jags and he should have a similar role to the one that he had with the Redskins, a low volume pass-catching role. In PPR leagues he should be able to catch enough passes to get a decent amount of points as a bye week fill-in for deeper leagues. That being said, he is very injury prone and he will need to stay healthy for any of that to matter. Unlike some of the backs above him, Thompson doesn’t have much room for growth in his role and even if Fournette were to get injured, Thompson’s volume and fantasy ceiling would remain low.

Jerick McKinnon (49ers – ADP: 267.1 – Bye Week: 11) – The deep wild card! McKinnon hasn’t played in over two years now, but he is reportedly healthy and appears to be locked into a spot and role this season. San Fran’s GM John Lynch has talked about McKinnon having a role and could be a threat as a receiver out of the backfield. How much usage he gets remains to be seen and his floor should be considered very low, especially at the start of the season. That being said, his ADP is so low it makes him basically free and the 49ers are lacking a pass-catching weapon out of the backfield and that’s exactly what McKinnon can provide. He has the potential to be a solid PPR asset and we know Kyle Shannahan is not afraid to use all three of his backs.