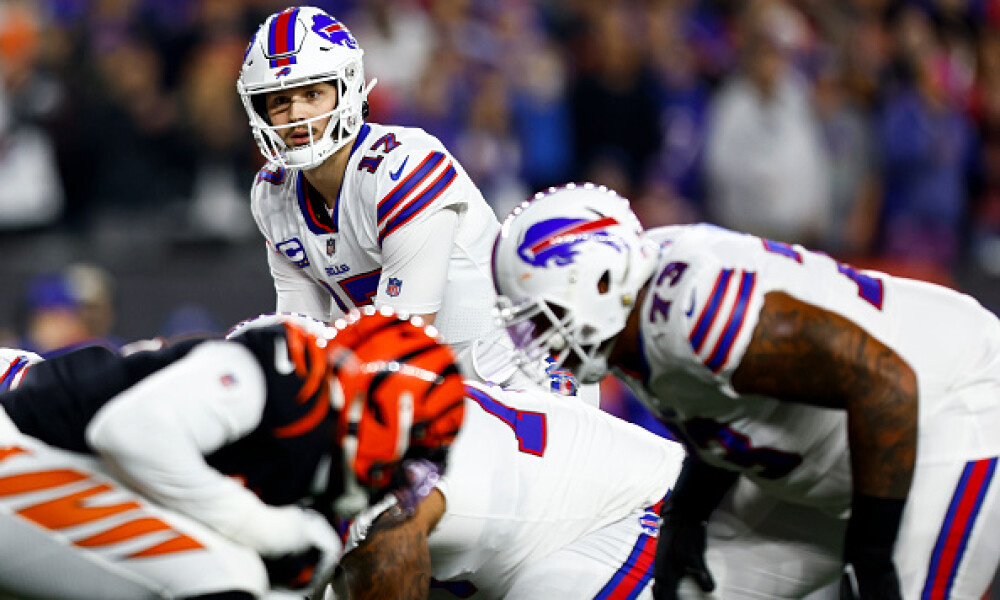 We’re down to the last four teams in the AFC and the last four in the NFC. Last week had a ton of wildness but now the serious Super Bowl contenders square off in the Divisional Round this weekend. The games are spread out over two days with the Jaguars @ Chiefs and Giants @ Eagles on Saturday and then Bengals @ Bills and Cowboys @ 49ers on Sunday. Either way we cut it it’s a loaded NFL weekend. Get ready for the Divisional Round with this primer that will break down each game based on game spread, over-under, storylines, injuries to watch, and top NFL DFS plays for each team.

This game, like many we’re getting these playoffs, is a rematch of a game earlier this year. In that Week 10 meeting, also in KC, the Chiefs won 27-17 which marked the six loss in seven games for the Jaguars. Since then though, including last week’s remarkable and historic comeback, Jacksonville has gone 7-1. They are arguably a completely different team this time around with a defense who’s hot. Jacksonville’s D has allowed just 25 points in 14 of the last 16 combined quarters. In fact, the 27 points given up in the first half against L.A. was more than the other 87.5% of the last four games combined. As for Kansas City, Andre Reid has an impeccable record in games following byes in the regular and post-seasons since coming to Kansas City. We can be assured that Patrick Mahomes, Travis Kelce, Eric Bieniemy, et al will have some new creations from the “lab” to uncork against Jacksonville. We’ve seen the Chiefs come from behind in playoff games and we’ve seen them get out to big leads and then hold on, this Jaguars team is feeling the mojo right now and this is likely to be a back-and-forth affair on Saturday at Arrowhead.

While the Jaguars are listing the same players on the injury report again this week as last, all of those players played in the Wild Card Round. So expect them to lineup against the Chiefs on Saturday. For the Chiefs, the extra week of rest has helped Mecole Hartman potentially return to the fold with a questionable tag after missing the last several games. We also should see Frank Clark back in the middle of the defensive line for the Chiefs which would completely change the nature of their defense.

The last time these two teams got together, Kirk had 12 targets, nine catches, 105 yards, and both passing touchdowns the Jags had. He’s been the top target in high pressure spots through this run Jacksonville has been on as well as evidenced by the 14 targets he saw last week, more than the 13 for Zay Jones and 11 for Evan Engram. The Chiefs’ secondary has been beatable in the second half of the season which also bodes well for the Trevor Lawrence-Christian Kirk connection.

At this point it’s too hard to figure out who will be favored in the passing attack for the Chiefs. Sure, it’s likely to be Travis Kelce but sometimes the force-fed targets don’t result in the best gains. With Mecole Hardman perhaps back for this game that adds one more weapon Kansas City to roll in and out on offense. So if we can’t trust any single weapon lets trust the guy orchestrating everything and the guy that finished as the QB1 in fantasy this year? The last time they faced this defense, granted they weren’t as good as they are right now, Mahomes posted 331 yards with four TDs, a pick, and seven carries for 39 yards.

After having one of the best statistical games in NFL playoff history, Daniel Jones gets a far tougher test this week. The Eagles’ defense has been one of the best units all year and have stifled the Giants offense pretty handily in the prior two meetings. That is in line to happen again. I can hear the Giants’ fans screaming at their screens now “but Jones is better than Aaron Rodgers.” Let’s calm down with that. Jalen Hurts will be back under center for the Eagles and their offense is just on a different level with him at the helm. That helps the defense too. The Giants might be able to run the ball against the Eagles in a decent way, but they’ll need to pass eventually and the darling of the corps Isaiah Hodgins is questionable. This is quite the uphill climb for the Giants.

We already mentioned Hodgins being questionable but there’s also Fabian Moreau, Landon Collins, and Julian Love in the secondary who are all questionable as of Thursday. Not great for a lack of depth to be a question heading into this game. It’s not always sunny for Philadelphia though with Brandon Graham, Robert Quinn, and Lane Thomas all questionable along with Avonte Maddox as a slot corner. These could open a bit of the passing lanes but hurt the Giants more than the Eagles.

The Giants offense doesn’t move without Barkley. It’s that simple. There’s no clear weapon outside to look to nor is there a threatening tight end as a bail out. Barkley is the bail out. He’s facing a team that knows him well but he still finds ways to post yardage. Even if the total yards aren’t huge, the Eagles are still allowing more than five catches a game to running backs and we already know that Barkley is a high-volume receiving threat and that’s good for points in DFS.

He’s fully practicing once again and should be a full go for Saturday. In the Week 14 meeting, Hurts has 217 yards passing with two touchdowns and then added seven carries for 77 yards and a score. That’s a healthy amount of fantasy points all told. When Hurts has been healthy and helming the Eagles’ offense, he tended to spread the ball around as evidenced by the nine different receivers who saw a target in the Week 14 game. With the line of the game suggesting a high-scoring win for the Eagles, that suggests a good day for Hurts.

The game that wasn’t now is. Except this time it’s happening in Buffalo rather than Cincy. The emotion with this game will be high outside of what’s on the line for both teams — a shot in the AFC Championship game. Unfortunately for the Bengals it won’t start with them having a 7-3 lead. We all know that these are two of the best teams in the league, regardless of conference, and when they’re at the top of their games they can be spectacular and tough to beat. That might not be the case in this game. Damar Hamlin has been in the facilities the last few days and you’d have to imagine that he’ll be in the stadium on Sunday which could very well tilt home field advantage in favor of the Bills.

Dane Jackson and Jordan Poyer are both listed as questionable for the game on Sunday which if they are both missing would help the passing attack of the Bengals. For the Bengals Tre Flowers is questionable which could hurt the secondary depth trying to stop the elite passing game of the Bills.

He’s the top target for the Bengals and has been since he was drafted. The Bills have struggled at times against top targets for opponents and Chase is about as good as they come. He saw 12 targets last week catching nine for 84 yards and a score. He should be in line again for a similar workload and stat line in this one as well.

It’s playoff time and that’s when Davis shines the most. He saw as many targets as Stefon Diggs last week against Miami with nine a piece. The Bengals have been solid against WR1s for opponents this year ranking 6th in DVOA vs. WR1s. On the opposite side of the field though is Eli Apple as his ability to get torched routinely. Does everyone remember what Davis did against the Chiefs porous pass defense last year in the playoffs? We could see a two score day from Davis with 6-8 catches and 100+ yards.

Just how far can Brock Purdy, Mr. Irrelevant in the 2022 NFL Draft, pilot this Niners team? Are we seeing the same thing happen when Colin Kaepernick took over for the injured Jimmy Garoppolo several years ago? One thing’s for sure, their defense is easily good enough to carry this team to a Super Bowl once again. It’s a good thing the Cowboys played the atrociously bad Buccaneers last week others the four missed extra points from Brett Maher may have actually mattered in the game. As it is it was NFL history to see a kicker miss that many extra points in a game. The Dallas defense is as good as it’s been in quite some time, coming in ranked 3rd in overall DVOA and leading the league in QB sacks. Heading into this game the outcome will be decided by whichever defense makes more plays. Both of the offenses have enough weapons to keep the defenses on their heels in a variety of ways. The idiom defense wins championships will certainly be put to the test in this match-up.

The players who are listed as questionable on Thursday are all leaning toward playing in the game on Sunday.

The niners defense is perhaps the most complete unit in football. That doesn’t mean it doesn’t have weaknesses though. The main weakness is the amount of catches to running backs they give up a game. San Fran is averaging allowing nearly 5.5 racthces a game to backs and that’s where Pollard shines. Not only was he effective all season on the ground but he was a big-play specialist in the receiving game as well. With the Niners being strong against the passing game, expect more targets to go Pollard’s way as Dak Prescott uses wheel routes and passes to the flat to avoid the strong pass rush from San Fran’s front seven as well.

He’s coming off a huge game last week against the Seahawks. While it’s true that Dallas’ defense is far better than the Seahawks, I’d expect to see Samuel to find holes much of the day. The Cowboys rank 32nd in DVOA vs. WR2s this year and that’s mainly due to Trevon Diggs’ risk taking in coverage. Facing a quarterback with a handle on the offense like Brock Purdy has right now, and the accuracy he’s shown, Samuel should find room to operate to have another 6+ catch, 100+ yard game receiving. That doesn’t include the rushing yards he’s seemingly always racking up in each game.