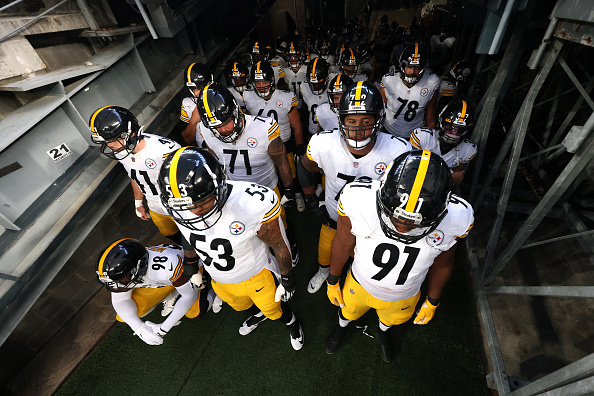 The trade deadline is coming up, and there is movement going on the league that makes for some interesting developments, as players head to contending squads and potentially better chances to show off their skills. Plus, it is always a great plan to swap out those IDPs that are underperforming (or on the sidelines with injuries) for your fantasy team(s). To that end, below are a number of options to consider adding while they are still widely available.

No Devin Bush for the Steelers, and Williams stepped up big time, despite not seeing a huge uptick in playing time (PT). He collected double digit total tackles (10 TT), with nine of the solo variety and two for a loss of yards (TFL). Add in a sack and a QB hit/hurry (QH) and you have a superb stat line for any LB’s weekly output. He did this against a mid-level IDP point allowing team in the form of Tennessee, so no reason to think that he cannot be productive when Pittsburgh heads to Baltimore in Week 8.

Wilson is coming off a bye week, so his ownership percentage makes him imminently available to snatch up off the wire. He is not the best in tackle production but is an excellent option in big play leagues. He does put up an average of six TT per week, so do not discount his value in hybrid leagues, though, but it is the INT/Fumble production (FF/FF)/PD/sack production that fuels his worth as an IDP.

The rookie is ramping up his PT as his health returns, and he had six solo tackles in Week 7 while on the field for just 43% of the defensive snaps. So long as Krys Barnes and Christian Kirk sey are not on the field, he is a great LB2/3 option.

Wilson is a LB whose PT is steady, and allows him to contribute in IDP leagues week in, week out. He has had at least seven TT in each of the last three contests the Chiefs have played, although he is only useful in tackle-heavy scoring systems.

Graham has been around long enough that he should be winding down his production, but this season has seen him breakout big time in 2020. Against the visiting Giants, he contributed four TT (three solo, one TFL), to go along with a sack, a QH and a FF. he has six sacks on the season, and now gets to face the reeling Cowboys’ offense and their third-string QB at home.

Okwara picked up a pair of sacks in Week 7, and added some more big-play benefits with a trio of QH, a FF and three solo tackles with one of those a TFL. Note that while his production of late will make him enticing, the next two matchups are poor for DE fantasy production and there is the recent addition of Everson Griffen by the Lions. He is an option in deeper leagues at this point.

The second-year player has turned into an all-around DL to employ in your IDP leagues. He collected seven TT against the host Saints last week, tossing in a strip sack of Drew Brees , a PD and a QH. The Thursday night matchup against the Falcons looks extremely tasty in Week 8.

Davenport is likely to see his PT increase as the season progresses. He collected a sack in this second game back on the field, and also had a couple of tackles after being shut out in the department in his Week 5 debut. He has three midrange matchups on tap in terms of team offenses allowing defensive point production.

Jenkins provides a steady source of tackles, and led the team with eight TT in Week 7’s game against the visiting Jags. He has a superb matchup in store this week, when the Chargers head to Denver. The Broncos has been the most generous offense in allowing points to opposing safeties.

Sorensen’s versatility lends itself to his extensive PT. He collected nine TT in Week 7, to go along with an INT that he returned for a TD. Loads of defensive snaps, with good tackle numbers and the occasional big play make him a steady producer on defense.

Nine TT (six solo) would be a nice bit of production, but he also had a PD, a FR and a sack against the in-state rival Bengals on the road in Week 7. This kind of defensive work should secure him steady if not increased defensive snaps for the Browns, although be advised he is on bye after this week’s contest at home against the Raiders, a mid-level squad in terms of allowing opposing safety IDP points.

Phillips was on the field a ton with Kyle Dugger’s ankle putting him on the sidelines. He had seven TT (six solos, one TFL) in Week 7. He has a top-five matchup in store with the Bills hosting the Pats in Week 8, so if you need bye-week or injury replacement help at safety, take a chance on him.

Mullen has become the top CB for the Raiders, and is racking up prodigious tackle numbers in that role. He has collected 19 TT over his past three games, including nine in Week 7’s contest against the Buccaneers.

Another top tackle producing CB, Butler is averaging just over six solo tackles per contest through the six games he has played in 2020 (41 TT). He is coming up on a fantastic matchup against the Bengals, the most generous to opposing CBs this season to date.

Jewell was highlighted in this article after breaking out big time in Week 4. Since then, though, he has been a major disappointment, and has a trio of sub-par matchups in store. Cut your losses and cut him.

Atkins has been relegated to backup duties in Cincy, and while it is possible he could be shipped out before the trade deadline arrives, he is certainly not useful in his current role.

Alexander is a great real-life player, but awful for fantasy purposes as a shutdown corner. Teams are going to avoid him on the field, and thus, he is not a good source of fantasy point production.

Remember, the first team listed is the one to use your IDPs against. Do not go crazy, and play a LB5 against the Vikings, but certainly you will do well if you own a top DB on the Chargers that you can plug in this week, for the most part.