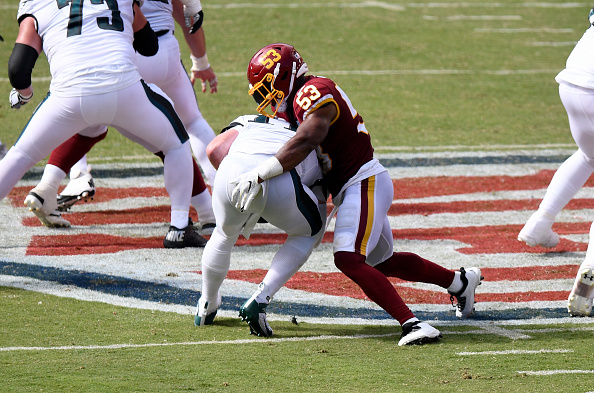 Now begins the full IDP Report with a full week of games behind us, and stats to analyze. There are certainly rising IDP to consider picking up for your rosters, and a boatload of injury information to consider when contemplating Week 2’s contests and those players you want to insert into your starting lineups.

Bye Weeks coming up: None until Week 5

Goodson had a nice opening game, playing the majority of snaps (49 of 59 defensive snaps against the Ravens) and collected nine total tackles (TT), five of those solos. He has a game against the in-state rival Bengals at home, and should be good for another batch of tackles.

Bostic was called on to play every defensive snap with Thomas Davis out of action, and he put up eight TT in his time on the field. With Davis listed as questionable for Week 2, he could be in for another nice stat line when Washington heads out to the desert to take on the host Cardinals.

Mayowa had a full stat line in the game in Atlanta: one solo tackle for a loss of yards (TFL), a sack, a QB hurry/hit (QH) and a pass deflection (PD). He saw action in 90% of the defensive snaps, and Seattle hosts the Patriots, who handed out the fourth highest fantasy point total to defensive ends in Week 1.

McKinley was more of a pass rush specialist but looked solid against the run against the visiting Seahawks, snagging five TT (two solo, one TFL). He also contributed a whopping six QH and collected a sack.

Smith has not played a down in the NFL since 2015, but came roaring back in 2020. He had 11 TT against the Rams (six solo, one TFL), leading his team in tackles. He also added a sack and a pair of QH to fill out the stat sheet. Week 2 is a good matchup against the Falcons, so there is a good chance for the fantasy goodness to continue.

Ioannidis is a find in DT-mandatory leagues, although he is a decent option as a lower end DL, in deeper leagues. He had four TT against the Eagles, and also collected 1.5 sacks in Philly last Sunday.

Two DTs this week, something of a rarity here. Wilkins had six TT (five solo) with a sack of Cam Newton in his Week 1 performance. He also had a pair of PDs, matching his 2019 output in one game. The matchup this week does not profile as favorable, although Weeks 3 and 4 profile better for matchup purposes.

Expect the Jets’ defense to see a lot of action this season, and that should translate into big stat lines for Maye. He collected 10 TT against the Bills (seven solo, two TFL) with two sacks, two QH, two PD and a forced fumble (FF) for good measure. The Jets have the 49ers coming to visit, which projects as a good chance to again provide fantasy value for his owners.

The second-year player was injured in his first game last season, and returned to provide double digit tackles (13 TT, nine solo, one TFL). The Saints come to visit in Week 2, and that is generally better news for the opposition than taking on New Orleans in the Big Easy.

The rookie was on the field for every defensive snap in the opening game, and he was credited with seven solo tackles as part of his eight TT effort. He has multiposition versatility, having been drafted as a safety (and thus his designation on fantasy platforms) but actually played at strongside LB against the Raiders. If that continues, he may acquire dual position eligibility for fantasy owners, always a bonus.

Jones may have landed in the perfect spot to revive his career, after departing from the Packers, and looks to have secured an every down role early in the season. He collected a dozen TT (six solo) against the visiting Colts.

It was Thompson’s pre-season performance that led to the departure of Ha Ha Clinton-Dix from the Cowboy roster, and while not a every down player in Week 1, he did collect 10 TT (nine solo) on 58 of 73 defensive snaps. Nice production and he seems poised to continue to be a favored IDP for the Cowboy defense, especially with the Falcons on the schedule this coming week.

Johnson has been handed the starting job, filling the role of departed Prince Amukamara in the Windy City. Playing opposite Kyle Fuller , he deflected two Matthew Stafford passes and picked up six TT (five solo) against the host Lions. A good matchup for Week 2 is in store when the Bears host the Giants.

Henderson offered big play production in Week 1, picking off a pass (INT) and a trio of PDs were added to boot. He also had five solo tackles on the day. The ninth overall pick in this year’s draft looks like a strong fixture in the Jags defense going forward.

The Charger CB had a dozen TT, all solos, Sunday against the host Bengals. Hayward was always known as a shutdown corner, limiting his fantasy value, but his Week 1 production hints at better things potentially for him. Week 2 sees him facing off against the Chiefs, and with them spreading the attack around, he should see action again.

It takes a bit of reach to list an IDP who collected five TT as a falling player, but he did play every down, and did not yield double digit tackle numbers. The Raiders brought him in to shore up their LB production, but Nick Kwiatkoski collected six TT on just 22 snaps compared to Littleton’s 67 snap count. Of course, Kwiatkoski is listed as questionable this week (see injury report below), so Littleton could rebound. Do not drop him yet, just keep an eye on his production.

None to speak of, except those listed below in the injury report.

Again, look to the injury report for those DBs you want to avoid this week.

Remember, the first team listed is the one to use your IDPs against. Do not go crazy, and play a LB5 against the Browns, but certainly you will do well if you own a top LB on the Bengals, Bears or Seahawks or a DL on the Rams that you can plug in this week, for the most part. Please note that these suggestions are after only one week’s action, and as with any small sample size, subject to fluctuation with the accrual of addition statistical data.

This section is intended to serve as a shortened cheat sheet listing those waiver wire targets you should be considering if you need to plug a hole in your starting lineup. All these players are spotlighted above, and you can read my comments about them in the "Elevator Going Up" section of this article. Not all the players commented on are here necessarily every week (although this week they are), however, as there is no need to waste your time searching for players that are heavily owned. This group consists of those that you may have a chance of locating on your league's waiver wire in that they are owned in significantly less than 50% of leagues. Happy claiming for your weekly matchups.