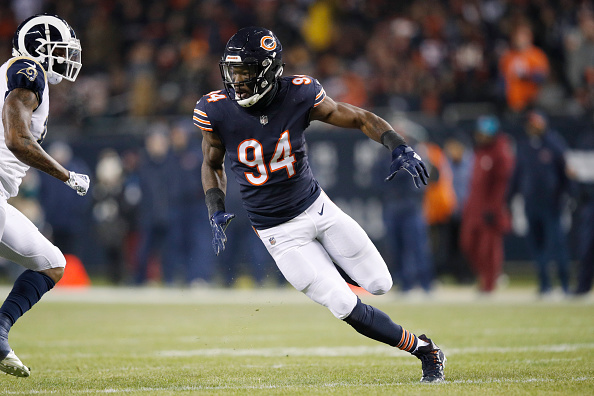 For most fantasy leagues, this is championship week. If you happen to be in a league that runs through the last regular season game, fret not, this article will be back for Week 17 (But seriously, change your league settings to wrap up the season before Week 17). The best advice for those of you playing for all the marbles, however, is to rely on those IDP that brung ya to the dance, and not to get too cute now. If you are dealing with injuries, though, read on to discover the limited gems that you can potentially snap up off the wire for your final push to victory.

Floyd has been on a sack tear of late, amassing four in his last six games played. He had a big fantasy production effort against the Packers in Week 15, with six solo tackles, two of which were for a loss of yards (TFL), a pair of sacks and three QB hits (QH).  He is seeing plenty of playing time, and with teams keying on Khalil Mack and Akiem Hicks , he is left free to wreak havoc on defense.

Lee has been inserted as the starting weakside LB for the 49ers the past two games, and his tackle production is benefitting from that new role. He had 10 total tackles (TT) against the visiting Seahawk offense in Week 15 (seven solo, one TFL), and gets to play at home in front of a generous stat crew in terms of awarding solo tackles.

Anderson is coming off a strong three sack effort against the Texans, and now gets to face another good matchup with the Packers coming to town in Week 16. He had four TT in Week 15 (three solo, three TFL), to go along with four QH to fill up the stat sheet.

Gotsis qualifies as a DT on ESPN, but only as a DE on Yahoo. He has a tasty matchup with the Broncos taking on the Raiders on Monday night, wherever he qualifies as a DL for fantasy. Coming off a stat sheet filler of a Week 15 effort, with six TT (five solo, one TFL), a sack, a forced fumble (FF) and QH and a pass deflection (PD), plug him in if you need to fill a hole at DL.

Jarrett is another DL that had a big Week 15 for fantasy purposes: seven TT (four solo, two TFL), two sacks, two QH and a FF. While the Panthers have not been especially generous to opposing DTs this season, their offense is questionable with Cam Newton ’s shoulder hurting his production. If you need to roster a DT in your IDP league, this is a player to consider picking up off the wire.

Jones is a reliable source of tackles, and plays a significant number of snaps at strong safety, especially with Kentrell Brice banged up recently. He is averaging 5.3 total tackles over the past seven games, although he is not a great source of big plays. He has more value in tackle-heavy leagues as a result.

Riley has dual eligibility in Yahoo, making him a tempting add on that platform. He is listed solely at safety on ESPN, and he is another DB that has utility in tackle-oriented IDP leagues. He is averaging 4 solo tackles per game, and while he does toss in the occasional big play (three INT, four PD on the season), you want him for the tackle points.

Despite seeing significant time on the field in Week 15, Suggs put up a huge goose egg against the Buccaneers last week. He is getting long in the tooth at 38 years of age, and has contributed only 1.5 sacks over the past seven contests. Avoid the name recognition and move on from the Baltimore LB.

Jones has been struggling to provide any IDP value the past two games with just three TT and no sacks. The current week’s opponent, the Rams, are a poor matchup, too, and you do not need another sub-par effort in Week 16 when fighting to win a championship.

Hughes also has cooled off considerably recently, with no tackles against the Lions in Week 15, and the absolute worst matchup possible against the Patriots in the upcoming contest. There are far better options available to rely on and you are urged to cut him loose.

No one to speak of, save for those listed below in the injury report.

Remember, the first team listed is the one to use your IDPs against. Do not go crazy, and play a LB5 against the Colts, but certainly you will do well if you own a top LB on the Raiders, Giants or Green Bay that you can plug in this week, for the most part.